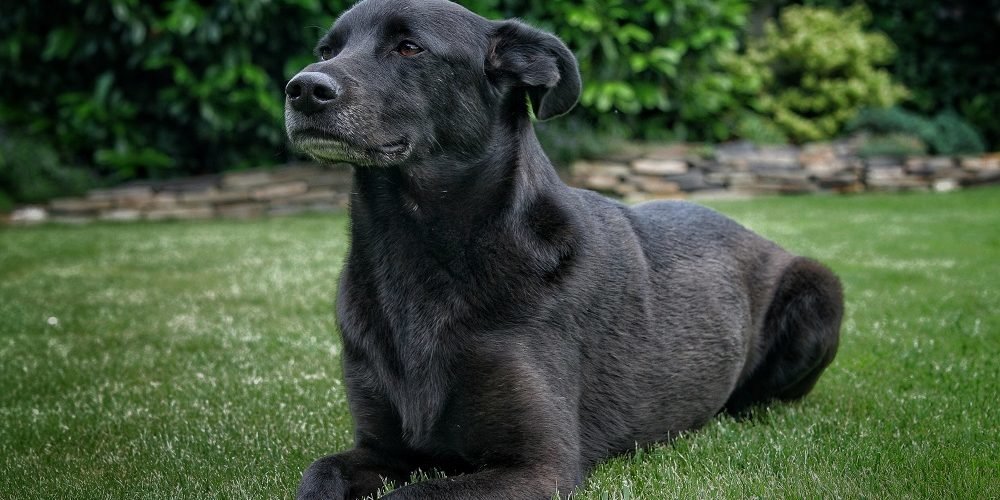 I was alone on a dark path one warm fall night, I saw a flash of lightening up ahead and suddenly there was a huge black dog with gleaming red eyes. The dog was larger than any I had ever seen and I was struck with fear.  There was another flash of light and again his eyes shown a red glow. His coat was shaggy yet his stance powerful.  I was overwhelmed by the scene, somehow knowing the dog was not of this world, yet I felt truly no mean-spiritedness in the dog’s demeanor. Slowly the image faded into the darkness and I continued on my way…

Although the story above is fiction, foreboding legends have often made reference to large black dogs, such as the Grim, the Hell Hounds, the Barguest, the Hounds of the Baskerville and more. The first recorded story of ominous black coated dogs dates to 1127 in the “Anglo-Saxon Chronicle.” The paper talks about a group of huntsmen who traveled by night, they rode large black horses and were accompanied by large black dogs with red glowing eyes. Doom or trouble seemed to befall every town where they were spotted and so the negative association with the black dogs began.

These stories that portray our canine friends as very ominous and threatening, most often originate in old England and are a part of Celtic and German legends. Tales that have been passed down for generations lend to the mystery surrounding black coated dogs. Did you know that subconsciously black dogs are more feared by most people? It’s the number one reason people choosing guard dogs, choose a black coated dog.

Many shelters report that black dogs are often overlooked, according to USA Today.  Is it because of such stories? Ironically the Labrador remains the most popular dog in the U.S., according to the American Kennel Club, but they offer no information with regards to color. Of course, Labs come in chocolate and yellow, but the Eastern Shore is home to many, many black Labs. Are we the exception to the standard? Is it a standard? To share a few of the tales that may have given rise to what is now termed “black dog syndrome,” or the fear of black coated dogs,  we have compiled a dozen of the beliefs surrounding these dark ideas that have given rise to the “legends of the black dog.”

In old England, dogs, in particular, those with seven toes, are supposed to be able to see ghosts. Others legends say that all dogs are aware of the presence of ghosts if they are near them, and that their barking, whimpering or howling is often the first warning of a supernatural occurrence. It is said that when a dog is staring intently, for no apparent reason if you look between the dog’s ears you’ll see a ghost. Packs of ghostly hounds have been recorded all over Britain, often heard howling as they pass by on stormy nights. These hounds are told to foretell death or disaster. If seen the proper action is to drop face down on the ground, as to avoid spotting them.  In contrast, three white dogs seen together are considered lucky, in some areas of Europe, especially if they cross a traveler’s path, follow someone home or refuse to be driven off.

In Wales, only black dogs could see the death-bringing hounds of Annwn, a character of Welsh Mythology.

Centuries ago dogs were once feared as possible carriers of rabies, sometimes even healthy dogs were killed after biting a human for fear of the disease. It was believed that even if the dog developed rabies years later, the person that was previously bit would contract the disease. Remedies for the bite of a mad dog often included the patient being forced to eat part of the dog in question, such as its fur or a piece of cooked liver.

It’s also good to know that not all European superstitions are negative toward the dogs, in Scotland; a strange dog coming to the house means a new friendship regardless of the color. In England, to meet a spotted or black and white dog on your way to a business appointment is lucky. The Greeks thought dogs could foresee evil and that black dogs were aware of Hecate, the ancient Greek goddess of witchcraft, whose presence often foretold death.

Howling compromised of a single howl, or three howls, and falling silent is said to mark a death that just occurred. Perhaps a howling dog at night means bad luck or that somebody close to you will become very ill.

Centuries ago in old Europe, black dogs were also used to cure illnesses. One old charm, which was often used to supposedly cure a child’s illness, was to take the patients hair between slices of bread and butter and feed the sandwich to the dog as to pass the ailment along to the canine.

Probably the most interesting story to come out of Old England is that of the Black Shuck, sometimes called the Barguest or Padfoot. The Barguest of northern England was most commonly portrayed as a huge black dog with large eyes and feet which left no paw prints.  Sightings had been reported in almost every county in England. The dog was said to be huge and very ominous. Legend, of course, says the dog was sent to Earth by the Devil himself, a true demon hound.

On the morning of August 4th, 1577 a violent storm struck the town of East Anglia. It is said that a demon dog materialized in the parish church and rampaged causing the steeple to topple and that the dog smashed the baptismal into tiny pieces. The hound is told to have killed three of the parishioners and scorched people as it passed by them. There were to have been marks of its huge claws on the door where it fled. Sightings of the dog continued after that, around cemeteries, old bridges, riverbanks and lonely lanes where the dog was said to haunt. People who told of encounters with the dog said they felt an icy chill on the back of their necks as the dog passed by. No matter the encounter, each person described the dog the very same; huge, black, ruff coated and with large glowing red eyes. Is this the same dog that gave rise to the superstitions of black dogs which are said to haunt lanes, bridges, crossroads, footpaths, and gates, particularly in Suffolk, England?  The Barguest has a fearsome reputation in North Suffolk, yet in Essex, it is said to protect those traveling by night creating even more mystery and controversy around the legend.

With all of the stories describing the mysterious black dog, the most interesting part of this tale is that archaeologists working in the ruins of Leiston Abbey in East Anglia have excavated the skeleton of a huge dog that would have weighed around 200 lbs and stood at least seven feet tall. This massive beast was buried in a shallow grave in the Abbey and scientist think it would have been placed there around the same time as the most famous phantom black dog story was reported to have occurred, that of the Barguest.

Sir Author Conan Doyle’s Hounds of the Baskerville, is a literary creation of a group of black dogs that terrorized the Baskerville family around their home in the countryside of Devon. It took the genius of Sherlock Holmes to solve the case and stop the murders. Perhaps Doyle took inspiration from local legend?

While mysterious legends are fun to share at Halloween, the office of Delmarva Unleashed has many black dogs. Maybe it’s an Eastern Shore thing, but we think they are simply beautiful! There is one additional legend we found in old Europe; it says that because the black coated dogs are supposed to have a connection to the supernatural, they offer outstanding protection from it.

Psst…they are often discounted at shelters this time of year. It’s a great time to adopt a black dog!