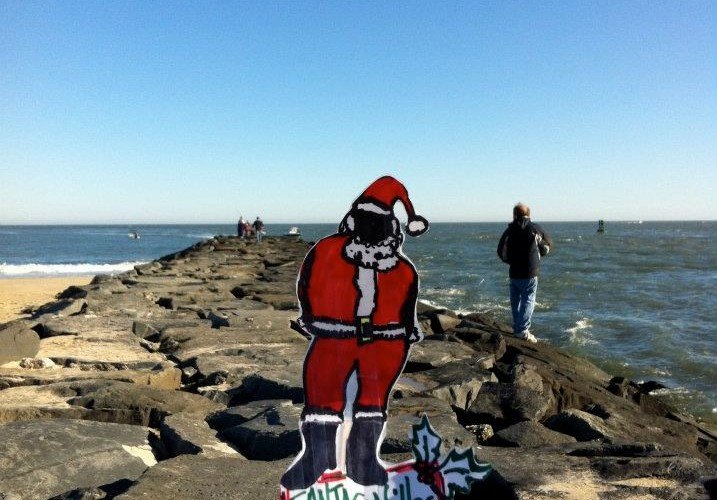 Imagine being a bartender at a small, empty bar just sitting around, shuffling through the TouchTunes filled with crumby pop music one slow Saturday afternoon in Ocean City. Then, all of a sudden you hear bells, then a single “Ho, Ho, Ho,” or a hundred of them! The doors fly open and dozens of Santa’s, wearing red suits and fuzzy white beards, flock to the bar with cash in hand. Time to put your bartending skills to the ultimate test. This might be your only chance to make some good tips during the off-season in Ocean City… not that you’d want to take all of Santa’s money for a tip though. That might put you on his naughty list.

Those hundred Santa’s are part of a non-denominational, non-commercial, non-political, and non-sensical Santa Claus convention that occurs once a year for absolutely no reason. Santa Con will invade downtown Ocean City, MD on Saturday, December 17th. From 3 pm, through the evening, and until 2 am, a massive sea of red will travel from boardwalk to bar, bar to bar, bar to boardwalk jingling all the way.

Sandy Claws, an alias for an Ocean City local who decided to organize the OC Santa Con, has to remain anonymous due to the Santa Con Constitution. The adult-only event occurs in approximately 221 separate locations and 30 countries. Each event has been organized by different individuals that remain anonymous. Earlier this week, Shorebread received a phone call from Sandy Claws, the secretive Santa in charge, who gave us our instructtions,

“Meet at the dead shark at the inlet at 3 pm. Be dressed before you arrive. We’ll take some pictures and start marching towards Wicomico Street,” said Sandy Claws, “Eat lunch before you come. We won’t really have time to sit and eat. Some bars on the route will be offering Santa specials, though, but we really just want to drink.”

Drivers on Coastal Highway will definitely be laughing in their warm, cozy cars on December 17th as they pass groups of Santa’s, elves, and reindeer waiting for the crosswalk signs to flash the white pedestrian crossing symbol.  Santa’s big belly will be bouncing as he scurries across the designated pathway, crossing the street.

“We hope to get some beeps from passing drivers,” said Sandy Claws, “I want to see them laugh at us.”

The Santa Con clan will walk from the inlet north to Wicomico Street where they will participate in Occupy Wicomico Street – or just chug beer and take shots at the Cork Bar, Bearded Clam, and the Pour House. From Wicomico Street, the group will walk towards De Lazy Lizard, Pickle’s Pub, and Pepper’s Tavern. Some Santa’s may drop out on the route due to drunkenness, being too cold, not wanting to walk 16 blocks, or for other reasons.

“Most of our time will be spent downtown, just because everything is centrally located. We don’t want to discourage any Santa’s with a 30-block walk. Santa’s need to stick together. We can’t go scaring some away. Santa likes to relax, drink beer, and remain in costume,” Sandy Claws said jollily.

Sticking together as a group and not leaving anyone behind are rules number 8 and 9 on the official Santa Con rule list. There are 19 golden rules scribed in Santa’s scroll book regarding the event:

2.    Santa dresses for all occasions

5.    Watching Santa get drunk and rowdy is fun

6.    Always pay for your beer and tip the bar staff

13.   You must address everyone as Santa

17.   Read the guidelines one more time

“Santa’s should pay for their drinks quickly and with cash. Can you imagine trying to keep track of 50 tabs all titled ‘Santa’? How would you remember which Santa was which if you were the bartender?” questioned Sandy Claws, “We want to make it easy on the bars and their staffs who have supported this event.”

Each stop on the bar crawl should take an hour or less. The Santa Con crew hopes to visit roughly 7 bars on their 9 hour journey and carol on the walk from bar to bar. A ‘naughty Christmas carol’ book has been created and will be printable in PDF format from SantaCon.info a few days prior to the event. A few of the caroling books will be distributed at the inlet on the day of, too.

For the first time in Santa Con history, the original creator, Santa Anon – a middle-aged man from New York City where the first ever Santa Con occurred – received a phone call from a police department weeks before the scheduled event. The police wanted to really know what the deal was with Santa Con and what to expect. It was the Ocean City Police Department calling. They were worried about the planned shenanigans that were going to occur in the streets of Ocean City and wanted more details about the drink fest.

“It’s pretty awesome that the OCPD called Santa Anon! Apparently, it’s pretty hard to get a hold of anyone when everyone is supposed to remain anonymous and only answers to the name, Santa. The OCPD is now well aware of Santa Con and support our fun-loving efforts,” said Sandy Claws, “They also said that all regular laws apply and they will be on watch for law-breakers. Be careful.”

Where can you pick up a Santa costume? Some fairly basic ones were spotted for only $5 at Five Below in West Ocean City. Sheila’s Party World in Salisbury, MD has a selection in the $35 – $70 range. Party City has Santa suits, Mrs. Claus outfits, faceless Santa morph suits, Santa babe costumes, and other styles online starting at $34.99. Enter the special Santa Con discount promo code, PC8NC7, in the online shopping cart at instantly save $10. Be sure to check the shipping to make sure it arrives before December 17th. The classic option: just make a Santa suit. The more creative the outfit, the better the suit.

According to the public SantaCon Ocean City event page on Facebook, 123 people have said they will be joining the spirited party clan. Hopefully the number continues to increase over the remaining days before the red, green, and white premier. Who doesn’t want to dress up like Santa and go cavorting around town for no reason other than for amusement and fun? Ho, Ho, Ho! 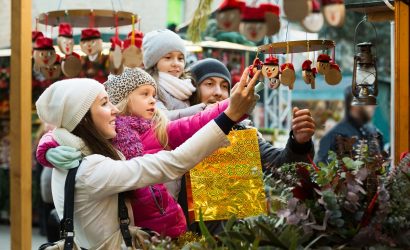 Shorebilly’s Swill: The First Summer – How We Made Our Money