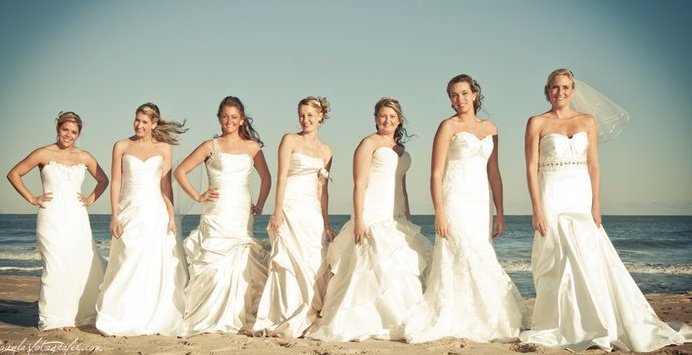 Who doesn’t love a good wedding? For the next six weeks the Shorebread staff will sit down with photographers, cake makers, dress specialists, restaurateurs, and many other specialists to uncover hidden gems of the wedding business that reside on the Eastern Shore. Weddings here don’t have to be on the beach, even though there are miles and miles of white sandy options. We’re looking for businesses that cater to the creative bride and groom and exemplify everything the shore has to offer. We hope you enjoy our coverage of Down the Aisle—Eastern Shore Style.

There are certain elements essential to a process, an object, even a celebration. In what seems like another lifetime, Jodie Noonan was very familiar with the essential components of automobiles. Noonan was the Parts and Services Manager for a General Motors division, overseeing 30 or so mechanics. These days Noonan guides hundreds of area brides as they select the key piece, the starring role, in the biggest day of their lives—the dress.

Years ago, Noonan was making the rounds to the handful of formal dress shops on the Eastern Shore, looking for a homecoming dress with her daughter, Amber.  At the time, there wasn’t one bridal or formal wear shop in Salisbury. Noonan had found a void in the market, and her “retirement” job. Noonan started the process of opening up her own shop by sharing the news with her husband,

“I told him I was cashing out my 401k and opening a bridal shop. He probably thought I was crazy,” recalled Noonan.

The Wedding Center houses bridal gowns in one room, the bridesmaids in another, formal dresses and tuxedos in a third, and has suites of other wedding and clothing related businesses situated within the same complex. Among them, Candice Giardina’s Coastal Occasions wedding and event planning service, Maria aka, “the Wedding Doctor” offering alterations, invitations, and Christening outfits—that double perfectly as flower girl and ring bearer attire, and the second floor even houses a banquet space, the “Plaza Room.” Brides can rent the room, that holds up to 179 guests, from Amber Nicoles.

“We are planning to have the whole room set up in neutral tones and then we will add in the bride’s colors, so she can actually see what the room would look like,” said Noonan.

The combination of all the elements needed for a successful wedding in one space—there’s even a photographer on the second floor, a church on the third, a large restaurant, a hair salon, and the potential for flower vendors to move in—makes The Wedding Center at Salisbury a destination wedding spot. This has all come about thanks to Noonan’s personal touch—she doesn’t just want to sell a bride a dress, she wants to make it all custom.

The Business of the Dress

In recent years Noonan has faced some tough competition—the Internet. Prospective brides would come in, Noonan and her staff would spend hours with them, and the brides would end up buying the dress on the Internet for a lesser price—which rarely ended up being the bargain the brides hoped for.

“The dresses would come in and need steamed and altered because the brides often didn’t understand the designer sizing chart. So they ended up coming in anyway with these dresses and then had additional expenses,” said Noonan.

The brides may have come in for Noonan and her staff to fix their dress issues, but the fact remained that they still purchased the big ticket item elsewhere—which puts dress shops like Amber Nicoles, with significant overhead costs compared to an Internet retailer, at a disadvantage. Noonan was forced to make changes to her lines to combat the problem.

Noonan took a trip to Germany and visited various bridal shops. She fell in love with a line of private label dresses that looked oddly familiar. When she returned, she realized the line she was in the process of obtaining for her Salisbury shop, had been the one sold in the high-end European bridal shop.

It’s well known in the bridal world that European designers are a year ahead of the U.S. market, and American designers look to those lines as inspiration for what they will make the following year. Noonan wants her shop to be ahead of the game, and is in the process of looking at European lines to carry.

“A bride may come in and like five dresses—a sleeve from this one, a neckline on a second, a hemline from a third—and with Jasmine we can customize all of those elements into one dress, “said Noonan.

It’s this desire to truly give a bride the exact dress she wants that resulted in Noonan creating her own customizable line five years ago, an experience that didn’t exactly turn out as planned. Noonan had a bad encounter with a Chinese manufacturer.

“It all started out great, the first run of dresses came out beautifully and were just as we ordered. Then things started to go terribly wrong. I would order for an October wedding and a June wedding on the same day—the October wedding came in fine, but just weeks before the June wedding, the dresses still weren’t in. When they did come in, the material was wrong; colors were wrong; details were missing,” recalled Noonan.

Carol, Noonan’s seamstress was constantly tasked with fixing the problems. When the dresses just didn’t show up, Noonan, on at least five occasions, had to rush order designer versions for her brides, and personally pay the difference. Needless to say, Noonan has stopped doing business with that manufacturer. The whole experience may have made her oddly sympathetic to bargain-hunting brides.

In addition to the brides who often come in with Internet dresses needing alterations, Noonan often encounters those who thought they found a real bargain—and ended up paying a huge price.

“Girls would leave here after trying on a $1500 dress, and go home, find it on the Internet for $200—what they saw looked like the exact same dress. When they received it, it wouldn’t come in a dress box, but a small envelope,” said Noonan.

The girls would then come into Amber Nicole’s with cheaply made knock-offs from China, made of poor quality material, with none of the detail of the original dress. Noonan would then help the bride look for another dress, or if time was an issue, assist her by adding additional embellishments to the disappointing dress to make it her own and salvage the situation.

To combat the challenges brought on by today’s Internet buyer, Noonan now carries lines that won’t allow their dresses to be sold on the Internet. She also carries the private label line also carried by the German shop.

In today’s economy, it’s understandable that many brides are very budget-conscious, and Noonan is certainly sympathetic. She sells wedding dresses on consignment, and offers deep discounts on discontinued lines and floor models—one gorgeous dress that originally retailed for $1500 is currently marked down to $250! Bridesmaids dresses are also reduced—one rack has dresses as low as $10, to make room for more inventory.

For those who do have a standard budget, Noonan says the top price point brides want to pay in this market is about $1500, with most wishing to stay in the $750 to $1,000 range.

Current trends in bridal looks are all things vintage, vintage-inspired, and favorite adornments include embellished sparkling accessories and removable jackets.

“We get a lot of requests now for lace and ruffles. We sold out of our vintage lace dresses on consignment,” said Noonan.

Popular dress shapes are “fit and flairs,” body-hugging designs with ruching details that flair at the bottom. Large ball gowns have gone by the wayside in favor of these more figure flattering looks.

Adding her personal touch, Noonan will customize vintage or new dresses with jeweled belts, sashes, wraps, shawls, and broaches to to truly make the dresses one-of-a-kind for her brides.

It’s this extra attention that really defines not only the style of the bride, but also the experience of shopping at Amber Nicoles. Noonan has been known to stay hours after closing with her brides, making sure no detail has been left out. She’s so inclined to attending to her bride’s every need that she is in the process of customizing a dressing area so that her brides don’t have to don the often large and intricate gowns in what she refers to as rooms the size of “shower stalls;” the standard dressing rooms of most bridal shops.

Tickets to the Expo can be purchased online via Amber Nicoles website and are $10 per couple, $15 at the door.

As a side note: Any ladies wishing to sell previously but lovingly worn designer clothing, Amber Nicoles now offers designer consignments in their “Poor Little Rich Girl” store in the complex. Call or visit the web or more information.

Single at the Shore: A Modern Clark Kent