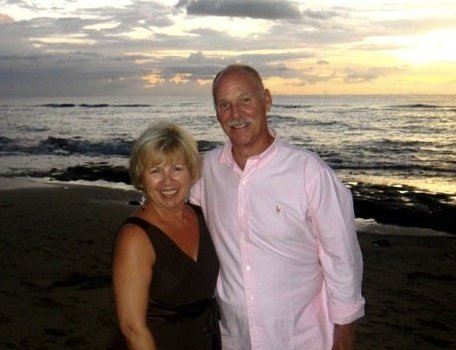 Our local community suffered a profound loss this past week, as family and friends said goodbye to Steve Falck. As an active member of the community, avid surfer, dedicated husband and father, and loyal friend, Steve made an indelible impact on many, many lives in our area.

Steve moved to the Ocean City area over 40 years ago, chasing the endless summer with his love of surfing. It was here that he met the love of his life, Patty, his wife of 41 years. Together, Patty and Steve started a variety of business ventures, from an antique shop in Shantytown in West OC, to Stephen Falck Construction, to their Berlin store, TaDa and later TaDa home. Beyond business, Steve and Patty started a family as well, with two daughters, Blair and Brooke. Steve quickly became involved in every aspect of his girls’ lives, whether it was cheering them on at swim meets, or attending dance recitals, or coaching lacrosse. Steve played a major role in the local women’s lacrosse community, serving as an Assistant Coach for both Worcester Prep and Green Turtle Lacrosse Club. Steve truly made a lasting impact on the lives of many local players through his patient and encouraging coaching style.

Beyond raising a family on the Eastern Shore and having a hand in multiple businesses, Steve touched countless lives with his charming personality, endearing demeanor, and charismatic spirit. One would be hard-pressed to find a single area resident with a negative word to say about Steve;  rather you will hear stories of times spent in the water, mentions of the work he did on area homes, or fond memories from the lacrosse players he coached over the years. That’s simply the kind of man he was.

In 2009, while surfing, Steve fell while riding a wave and was struck in the head by his board. He suffered a ruptured ear drum at the time, but as the symptoms failed to subside, it became apparent that Steve’s symptoms were indicative of something much more severe. After consulting with doctors at John’s Hopkins University in Baltimore, Steve was diagnosed with Multiple Systems Atrophy, or MSA, a rare condition with no known cure. MSA is a progressive neuro-degenerative disorder characterized by autonomic nervous system failure. Symptoms are similar to Parkinson’s Disease, but the two are unrelated in their causes.

Life dealt the Falck family another blow when Steve was diagnosed with prostate cancer in addition to MSA.

Through his struggles, Steve’s spirit and strength served not only as an inspiration to his family, but to the entire community. A celebration of life service will be held Sunday, July 21st at 2pm at the Worcester Prep Athletic and Performing Arts Center. In honor of Steve’s aloha spirit, casual attire (i.e. Hawaiian shirts and flips flops) are encouraged.

In lieu of flowers, the Falck family has requested that donations be sent to the Ocean City Chapter of the Surfrider Foundation. Donations can be sent to: