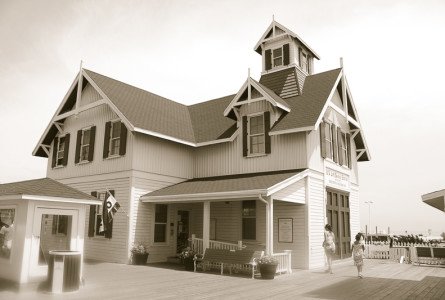 Oftentimes, we are so caught up in the hustle and bustle of the boardwalk – the rides, the games, the shops, the crowds – that it’s difficult to imagine a “historic” Ocean City, or one riddled with ghosts for that matter. Travel writer and author Mindie Burgoyne will debut the latest leg of her Chesapeake Ghost Walk series this weekend, with ghost walks scheduled for Friday and Saturday nights in downtown Ocean City.

The Ocean City Ghost Walk is the eighth Eastern Shore ghost walk in the Chesapeake Ghost Walk series, which launched in January, and has included stops in Easton, Cambridge, Denton, Crisfield, Snow Hill, Pocomoke, Berlin and Ocean City. Burgoyne is also the author of Haunted Eastern Shore: Ghostly Tales from East of the Chesapeake. Burgoyne has logged hundreds hours in researching ghost folklore and Eastern Shore history, but she met her toughest challenge conducting research for the Ocean City ghost tours.

“I will say, out of all the towns I’ve done, this one was the most rewarding to do. It was just so different,” Burgoyne said this week, explaining that most of the towns she researchers are historically intact, with an abundance of history. Ocean City, however, is a different beast entirely. For starters, Burgoyne explained, Ocean City isn’t as old as some of the other Eastern Shore towns. In addition, “it’s not really a home town city. So much of the focus of life here is tourism. Even the locals work mostly in tourism.” Because so much of the historic parts of Ocean City have been built over, Burgoyne was challenged to dig deeper.

“The way I craft these tours is to collect stories about unexplained events and then I also look at the history, and hopefully they come together.” Burgoyne starts by interviewing area locals for interesting stories of the supernatural or unexplained, but rather than stop there and simply re-tell those stories, Burgoyne goes a step further – researching the stories to find a historical connection. From there, a richer story is born. “The real focus is storytelling, and I want those to be truthful,” said Burgoyne. “The town itself is a character in the story”

The tour will begin at the inlet and end at the Henry Hotel, circling from the inlet to 4th Street and making stops at the Ocean City Lifesaving Museum, the Ocean City Pier, Trimper’s Rides, the Atlantic Hotel, the Tarry-A-While Guest House, Fisherman’s Cottage, and the Shoreham Hotel. Along the way, Burgoyne will tell stories about unexplained happenings, apparitions, and tales of the dead. Burgoyne will also challenge guests to examine their own psychic abilities to discover whether they tend to be more clairvoyant (seeing apparitions), clairaudient (hearing things from the spirit world) or clairsentient (absorbing feelings from the spirit world). “Everybody has a different belief, but I believe that whatever you want to call that other world, its right here around us all the time, and sometimes, that world bleeds into the other,” said Burgoyne, who believes that recognizing aspects of the paranormal is a learned skill rather than a gift.

So how did Burgoyne end up finding a passion in ghost tours and history? “I moved into a haunted house!” Burgoyne moved into an old Victorian House in 2002. She soon found herself fascinated with her own home, as well as the reported hauntings at the Snow Hill Inn. She began research on the Snow Hill Inn and hasn’t stopped since. “It was one of the most thrilling things I ever did – and I just kept doing it!”

Burgoyne plans to continue the ghost walks, with plans for a Berlin Ghost Walk at the end of September, and hopefully more Ocean City ghost walks in the future. For more information, visit her site: travelhag.com. 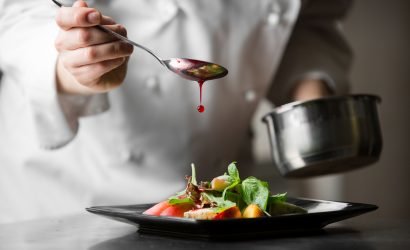