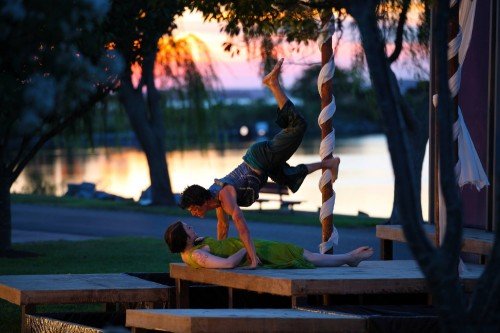 Arts and entertainment on the Eastern Shore is a continuous work in progress. Over the past few years, substantial strides have been made in reviving the arts scene within the Eastern Shores’ small towns, with the return of arts strolls, galleries, and an increase in dance and theater performances. While we love our local arts scene, the truth is we are still a long way from a thriving arts world here on the shore, particularly for local residents that don’t have the opportunity or means to travel over the bridge. Eastern Shore native Kyler Taustin is hoping to change all of that, one show at a time, by bringing his life’s work, the Brown Box Theatre Project, to the Eastern Shore.

Brown Box Theatre began in 2009 in New York City, before relocating its home base to Boston. “We did two shows our first year and brought both of them down here,” said Taustin, Eastern Shore native and Artistic Director of the Brown Box Theatre Project. Taustin explained that the project’s namesake was borne from the notion of packing everything up in a brown box and taking it with you everywhere you go. That is exactly what Taustin has done with his Theatre Project. The Shakespeare shows – set and all – fit entirely in a horse trailer, while the smaller shows crammed in the back of a pick-up truck with actors fitting snuggly in the cab. No matter where or what show they are performing, the close-knit group travels in tight quarters, bringing enthusiasm, passion for their craft, and of course, talent.

This year marks the third year of Brown Box’s free Shakespeare performances – the flagship performance for the group. The group will perform 12 free, public performances of Shakespeare’s Midsummer Night’s Dream across the Eastern shore, along with six in-school shows. With the majority of this years’ shows already under their belt, the Brown Box crew is gearing up for their biggest show this Friday in downtown Berlin. 500 people turned out for the performance last year, and with this years’ performance coinciding with Berlin’s 2nd Friday Arts Stroll, it’s sure to be another stellar turnout.

By bringing the Brown Box performances to the Eastern Shore, Taustin aims to strengthen his mission statement – to bring theater back to the streets and back to the people. “It goes a long way for people that may not be able to afford what does come to this area,” he said. “It’s huge to be able to have us come right to their backyard.”

The show’s core group includes 13 actors, along with a stage manager, Taustin, and a videographer. All but two of the actors are Boston-based, with many enjoying their first trip to the Eastern Shore. “They love it,” said Taustin, “They love the seafood, they love the beach – it’s a different world. This gives them the chance to go on a working vacation. It’s a retreat – an exciting exploration of a different community.”

Actors Johnny Quinones and Patrick Curran agreed that their time performing on the shore has been thoroughly enjoyable so far. Quinones  is new to the show this year, and new to the Eastern Shore. “We’ve been getting such great feedback so far,” he said, adding that performing at Sturgis Park in Snow Hill has been his favorite venue so far. Curran, who is currently in his second year with the Brown Box Shakespeare performances, has enjoyed the Northside Park performance the most. “What was really rewarding was their reactions throughout the show,” he said. “It was as If they had never seen a performance of Midsummer Night’s Dream, ever. It was a lot of fun – I really loved that audience.”

Taustin, Curran and Quinones all agreed that for the most part, the audiences in Boston approach a live performance of Shakespeare differently than audiences on the Eastern Shore. “Here, the audience is wanting and ready to go on a journey with us, whereas there, they see so much theater already,” explained Taustin. “There’s a difference between an audience that comes to us with predetermined expectations versus people seeing it for the first time,” added Quinones. Curran, a Boston native, chimed in, adding “being from Boston, you have a lot of family and friends at the show, but here, I don’t know my audience and that’s what I want, to create for people you don’t know. It’s very rewarding.”

With crowds increasing significantly so far this year, it’s no wonder the cast is enjoying their stay on the Eastern Shore. “We’ve been having a lot of great turnouts and we’ve got some great momentum going,” said Taustin, noting that last year’s performance in Snow Hill brought roughly 70 viewers, while this year more than doubled, with 165 people coming out for the Sturgis Park show. Northside Park also brought a large crowd, with around 130 people.

In conjunction with the live performances, Brown Box also conducts a number of workshops while here, with two public workshops and eight school workshops. Taustin explained that their Education Coordinator Rosalie Norris heads the workshops, and enjoys every aspect of the opportunity to work closely with the community. The workshop, he said, is for “students or people who just want to understand the background behind the theater or to better understand the arts.”

For the adult workshops, Norris takes a “page to stage” concept, which traces the connection between the written Shakespeare word and how it is intended to be viewed – on the stage. For the students, the workshops aim to help them to develop a framework of what theater is all about, particularly for students that have never been exposed to theater or the arts before. “We’re very excited to open that door and to give that opportunity,” said Taustin, adding that by exposing students to theater and the arts, they are not only exposing them to an entirely new world, but also providing them with a new opportunity for expressing themselves that they may not have discovered otherwise. “It allows someone who may not thrive sitting at a desk; it allows that kind of child to find a new form of expression.” Between their in-school shows and workshops, Taustin estimated that they would be reaching over 3000 students on the Eastern Shore this year.

Besides his current projects, Taustin also is working to develop an Acting Company, to eliminate the unknown of who will be traveling with Brown Box each year, and more importantly to develop a strong sense of family amongst the cast. “This experience demands that we are tight-knit and together all the time.” From dorm-style living while on the road to traveling in one vehicle, it’s safe to say the cast gets to know one another very well. “As an actor, the stronger your connection with the cast, the more powerful the connection on stage will be,” said Quinones. “I’ve made some of my closest friends doing this, and that’s huge,” added Taustin.

Beyond creating a family within Brown Box, Taustin also aims to create a family that is a part of the culture and community here on the Eastern Shore. “We are here to stay, and we want to be a part of something that the community can rely on.” The key, added Taustin, is consistent talent and scheduling.

As for the future of Brown Box Theatre Project, “our 5th Anniversary will be a big one,” said Taustin, hinting at plans to travel with two shows a summer rather than one. “We are just really excited to be here. Every little bit of help we’ve received from this community has been greatly appreciated.” With three successful years under his belt, Taustin is excited to continue forging his dream and his mission to strengthen the arts on the Eastern Shore. “This is my life, this is my passion –this company is my baby.”

For more information, visit www.brownboxtheatre.org. Friday’s show will be held on Main Street in Berlin at 7pm. 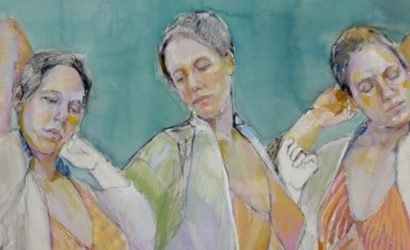