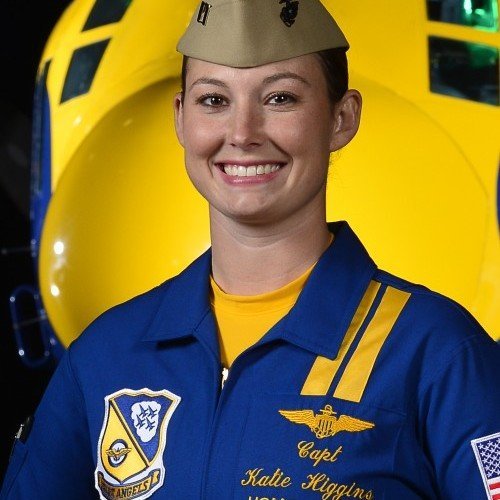 We were pretty thrilled when we heard that the Blue Angels would be soaring over Ocean City during this year’s OC Air Show, but that news has been surpassed by the announcement that the FIRST female Blue Angels pilot will also be participating in the show. A press release this week revealed that Marine Captain Katie Higgins would be flying in the 2015 OC Air Show, which will be held June 13-14 in Ocean City, MD.

“We are excited to welcome Katie to Ocean City and we know all of Maryland is proud of her,” said Brian Lilley, President of the OC Air Show. “She will add even more excitement to this amazing lineup with the U.S. Navy Blue Angels, the Breitling Jet Team, and the F-22 Raptor Demo Team. Those are three of the biggest acts in the air show industry, all performing the same year.”

Higgins has flown nearly 400 combat hours in support of exercises and operations in Afghanistan, Djibouti, France, Greece, South Sudan, Spain, and Uganda. Her decorations include five Air Medals. She joined the Blue Angels in 2014 and has accumulated more than 1,000 flight hours. She is one of three pilots who fly the C-130 Hercules, known as “Fat Albert.” She and the plane will perform a demonstration for crowds on Saturday and Sunday during the OC Air Show.

Higgins is also a Maryland native, originally from Serverna Park, MD and a graduate of the U.S. Naval Academy. She also obtained a Masters Degree in International Security from Georgetown University.