If there are two things that I love unerringly, it’s supporting local…and coffee. A major component of ShoreBread has always been (and will always be) supporting our local businesses by shedding a little light on their hard work, ingenuity, and passions. Of course as a writer and former – albeit brief – New Yorker, much of that work is fueled by coffee. Lots and lots of coffee in fact, which is why when our friends at Burley Oak spilled the beans (see what I did there) on their latest venture in brewing cold press coffee, well, I was quick to schedule a trip to the brewery to get a few sips, which led to a few bottles and a serious caffeine rush. Not familiar with cold brew coffee? Good thing you’re reading this article then…

I had my first romantic brush with cold brew coffee in Brooklyn, at which point in time I naively assumed that cold brew was analogous to iced coffee. Such is not the case. Iced coffee is coffee that is brewed hot and poured over ice, while cold brew requires a long process of steeping coffee grounds in cold water for an extended period of time. The result is coffee with lower acidity, less bitterness, and in our humble opinion, a smoother finish.

Burley Oak owner Bryan Brushmiller felt a similar affinity for cold brew coffee while on a recent trip to Portland for a craft brewers conference. One thing led to another and he was soon using a cold brew toddy back at Burley Oak to cold brew coffee for the staff. Of course, when you own a brewery and you are friends with the Rise Up Coffee crew, the next logical step is to start brewing your own coffee for your customers to enjoy as well. The Burley Oak team decided to repurpose some old brewing equipment, retrofitting the equipment that had recently been displaced to make way for their new brew house system. Rise Up provided the beans which left Brushmiller to figure out the coffee brewing process. “We just decided to do it the way a [craft beer] brewer would do it,” he explained as he walked us through the cold brew process, which is slightly more time intensive than we imagined. “For cold brew coffee, the catalyst is time,” said Brushmiller, noting that in contrast to brewing hot coffee (which typically takes only a few minutes), time works to bring out the complex flavors of the cold brew. After some taste testing and tweaking, they were able to bottle the perfect batch. “Everything is bottled and labeled by hand,” added Brushmiller, as we (finally) cracked open a bottle of the cold brew for a taste test.

But don’t let the ‘cold’ in the label fool you, in fact the term cold brew coffee is more of a nod to the process than how it should be consumed. Brushmiller explained that a one-to-one ratio of cold brew coffee and hot water can be used to consume your cold brew hot (we tried it, he’s right). Either way the flavors are less bitter and acidic than traditional coffee, with a perfect balance of bold-meets-subtle. “It’s 67 percent less acidic than regular coffee because of the process, which means much less bitterness,” said Brushmiller. Of course, that doesn’t necessarily mean less punch, as we soon found out after sipping heavily on the 16.9 ounce bottle.

So where can you find it? Well for starters at Burley Oak behind the bar to take to go or to enjoy at home. “I really wanted to offer another non-alcoholic drink for people, especially people that are here and want to just hang out and listen to the bands at night for another few songs.” In addition to being sold at Burley Oak, initial plans call for bottles to be sold at local businesses around Berlin, including Baked and Urban Nectar, to name a few. Intrigued? You should be…stop in and pick up a bottle of Burley Oak Cold Brew Coffee (or in our case a few) to enjoy hot or cold! 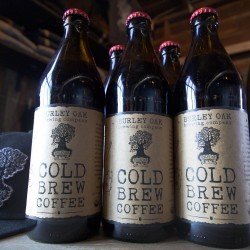 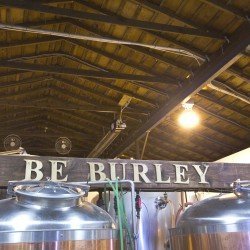 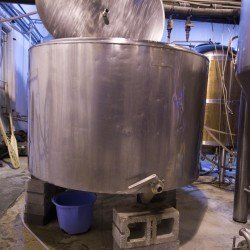 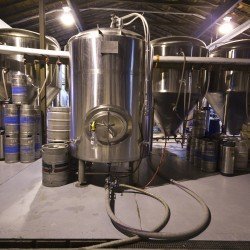 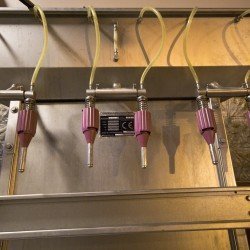 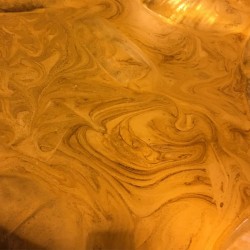