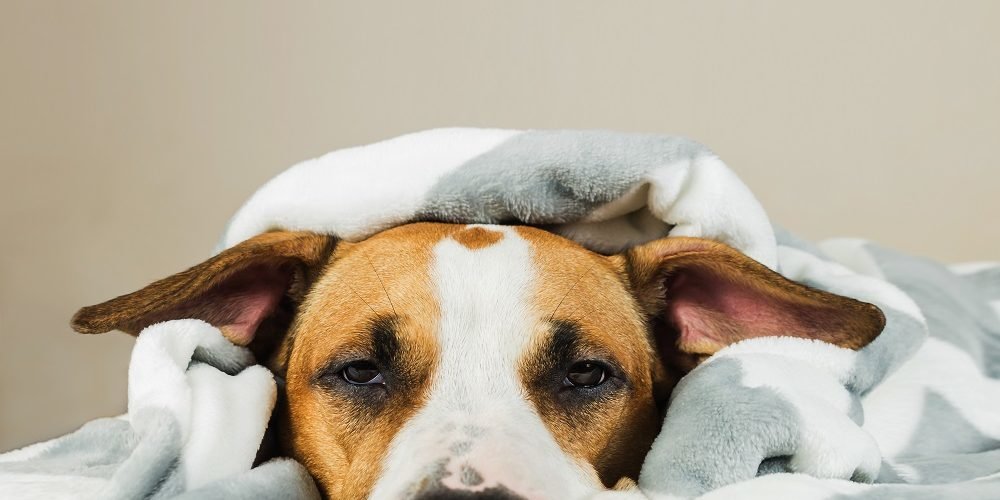 Canine influenza has two predominant strains in the United States they are H3N8 and H3N2. They are from the orthomyxoviridae family genus influenza. Both strains are highly contagious, almost 100%, with low mortality, less than 10% (1).

The H3N8 strain was first found in racing greyhounds in Florida around 2004 and disseminated to other racetracks in several other states. The virus is believed to be a mutation of the H3N8 equine strain. (1) The H3N2 strain is thought to be stronger and take hold faster and longer then H3N8.  The H3N2 strain is speculated to have originated in South Korea or China, in 2006-2007. It is believed to have mutated from a bird strain and infected dogs sold in a market where live birds were also sold. There was a large outbreak in Chicago in the summer of 2015.  It infected thousands of dogs, and some fatalities did occur. It has since then diminished. We see pockets of it in areas of the country, and when it hits, it is large in numbers over a short period of time.

These viruses are usually species specific but if a mutation occurs then a rare crossover infection can occur. H3N2 is predominantly found in dogs but has been isolated from cats and ferrets too. There have been no human crossover infections documented of either H3N8 or H3N2 (1).

How it is passed is similar to the human flu. Sneezing, coughing, barking and just breathing lead to aerosolized fluid droplets carrying the virus. These droplets can be breathed in directly or deposited on fomites; inanimate objects that diseases can live on; such as clothing, dog bowls, tables, floors, chairs, dog toys… and on animate objects like people.  On environmental surfaces, the virus can live up to 48 hours, on clothing 24 hours, and on hands 12 hours (1).  Stressful environments and areas where a large number of dogs go; i.e., dog parks, condos, pet stores, groomers, veterinary hospitals, and boarding facilities: have a higher contamination rate. (2)

The good news is the virus is not that hardy so a good disinfectant will kill it and good hygiene can help prevent spreading.

Once the virus is in the body, it infects the cells lining the respiratory tract.  Starting at the nose then down the throat/trachea and into the bronchus and bronchioles. The viruses are highly infectious the literature states 50 – 80% of dogs exposed will show clinical symptoms.  Those dogs that do not show clinical symptoms can still shed the virus. Infected dogs can shed H3N8 up to 10 days and H3N2 up to 24 days. The H3N8 incubation period is a few hours to 5 days. The H3N2 incubation period is 2-8 days. (1) Shedding of the virus for both can start before clinical symptoms are seen and last after clinical signs have cleared.  Clinical symptoms start off as fever, lethargy, yellow/green mucous nasal discharge, cough dry or wet, mucoid or runny eyes, dehydration, and chest rattle.  Based on clinical signs then testing should be done.

Most of the time testing starts with routine blood work. Majority of the time this is unremarkable, except occasionally elevated white blood cell counts are found secondary to pneumonia (2). Further testing can involve taking a nasal swab and sending for polymerase chain reaction (PCR) testing. The PCR testing will indicate “yes” or “no” and can differentiate H3N2 from H3N8. This is thought to be the most reliable test (1). Blood testing using hemagglutination inhibition (HI) assay test can also be done (2). A single blood sample can tell exposure. Serial blood samples taken 2 weeks apart can show a rise in titer and show active infection. HI differentiates between the two viruses also. Vaccinated dogs will have a false positive test, so knowing vaccination status is essential. Dogs that test positive along with any other dogs in the home should be quarantined for 4 weeks.

Treatment varies depending on how it is affecting the patient.

In minor and mild cases monitoring is all that is needed, and in 2-3 weeks it should clear (1). This is the majority of the cases. The mortality rate is less than 10% for all exposures. In moderate to severe cases supportive care is needed because these are the cases where mortality can occur. Supportive care consists of IV fluids, antibiotics to help fight off secondary infection, nebulization with or without coupage, and non-steroidal anti-inflammatories to lower fever. In severe cases with pneumonia, oxygen therapy may be needed and steroids at low doses to help open the airways. Steroids can be controversial because they can further immunosuppress and cause the virus to shed longer. No antivirals have been shown to be beneficial in fighting off the virus. Antiviral meds are only helpful in the early stages of the disease and in cases of canine influenza most dogs are presented in the later stages (1)

Prevention is done by avoiding highly populated areas as previously mentioned and vaccination. There are individual vaccines for H3N8 and H3N2. There is also a bivalent vaccine that has both H3N8 and H3N2. At Precious Paws, we carry the bivalent vaccine since we have had a confirmed case via PCR testing for H3N2.  The vaccine is for puppies/dogs eight weeks and older and initially requires a series of two shots 3 weeks apart. After the second vaccination, it still takes 7-10 days to be protective.