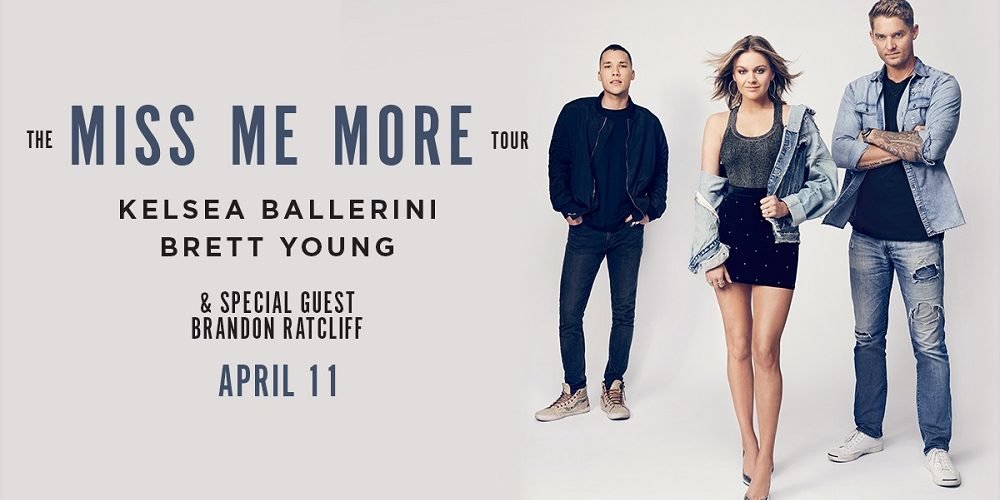 After completely selling out The Unapologetically Tour, including an international stop in Australia, Black River Entertainment’s Kelsea Ballerini is dominating arenas headlining The Miss Me More Tour with Brett Young in 2019.

Named after her chart-rising bold anthem, “Miss Me More,” the most-added new single on Country radio upon release, the 14-date tour will kick off on April 11, 2019, at Wicomico Youth and Civic Center in Salisbury, MD, straight through Scheels Arena in Fargo, ND, on May 11, 2019.

“The message of ‘Miss Me More’ means so much to me and that’s why I’m so excited to announce this tour,” said Ballerini. “It’s about being bold and unapologetically standing up for yourself. I can’t wait to sing it with everyone next April!”

Inviting hitmaker Young to join her, the ACM’s New Male Vocalist of the Year has racked up four consecutive #1 PLATINUM hits from his self-titled breakout album, setting him apart as the first debut Country artist since 2014 to claim a 3x-Platinum certification. Special guest Brandon Ratcliff rounds out the bill as the opener.

Presale tickets are available now exclusively for Ballerini’s fan club members, The Legends. Tickets are open to the general public on Friday (11/2) at 10 a.m. (local time). For additional details, including VIP Packages and Experiences, click here.

Announced dates, cities, and venues of The Miss Me More Tour to date:

Kicking her setlist up a notch, Ballerini will mix her acclaimed sophomore album, Unapologetically, including #1 “Legends,” with new knockouts from the deluxe edition like “This Feeling” with The Chainsmokers.

Recently honored at this year’s CMT Artists of the Year special, the fourth consecutive CMA Female Vocalist of the Year nominee is vying for the esteemed title and will perform at The 52nd Annual CMA Awards on November 14, airing live from Nashville at 8/7c p.m. on ABC.

Ahead of her anticipated trek next spring, Ballerini will continue Keith Urban’s Graffiti U World Tour through November 3 at American Airlines Center in Dallas, TX, before returning to the road this winter for Kelly Clarkeson’s Meaning Of Life Tour in January.