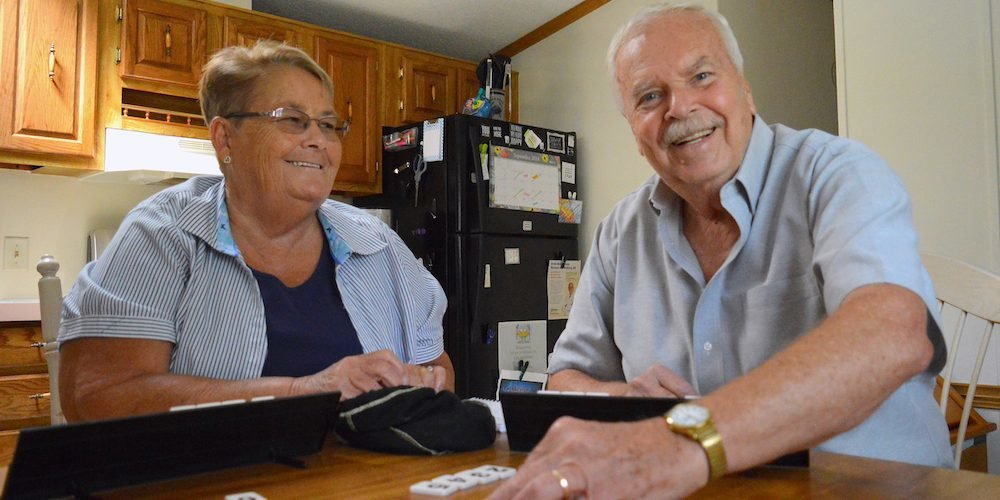 November is Lung Cancer Awareness Month! When we came across this amazing story written by Rachel Swick Mavity, we had to share.

When Charley and Mary Senick retired from the police force in Philadelphia, they were ready to relax and enjoy themselves.

The couple had regularly vacationed in Wildwood, New Jersey, and thought that someday that would be where they retired. That was until the mid-1990s when a friend invited them to visit Delaware.

“We visited them in Long Neck and weren’t even here for an hour before we decided we would buy here,” Mary recalls. “We moved down to Pot-Nets Creekside full-time in 2001 and love it here. It’s the quiet neighborhood, the friendly people, and the great amenities that really make it home.”

Both Charley and Mary had smoked for years as police officers, however when their daughter told them she would not bring their soon-to-arrive grandchild into a smoking home, they decided enough was enough.

“It’s really a personal decision to quit smoking. We are so glad we did, but we don’t push it on anyone who still smokes,” Charley says. “Yes, it is hard to quit, but honestly, after two weeks on Chantyx, it was like I never smoked.”

Mary agreed. “Granted we had the excitement and goal of having our grandchild come here, however we quit and have not missed it,” she said.

“I had been having the CT scans for a few years and there was never anything,” Charley said. “Then earlier this year, Dr. Tulloch said there was a spot he was concerned about, so I went for a biopsy.”

Charley and Mary met with Dr. Vikas Batra of Sussex Pulmonary and Endocrine Consultants in Lewes. Dr. Batra performed the biopsy at Beebe and found the suspicious spot was cancer.

“We heard him say it was lung cancer and Mary immediately went into panic mode,” Charley recalls.

“It is incredibly scary when they say it is cancer and you start thinking about how you are going to get through it all,” Mary said. “I started thinking that there was no way I could get a hospital bed into our house!”

Luckily for Charley, Dr. Kurt Wehberg, board certified and fellowship trained cardiothoracic surgeon, had just joined Beebe Healthcare. Dr. Wehberg and his team were building a new program – the Center for Robotic Surgery.

“Dr. Batra had worked with Dr. Wehberg for years and used to send his patients to Salisbury to have robotic lung surgery there,” Charley said. “He told us about all of Dr. Wehberg’s successes and we set up a consultation.”

Charley’s father had had lung cancer many years ago and so Charley and Mary recall how traumatizing the surgery had been for him. “They had to open up his chest and there was a large incision. It was more than a year of recovery, so that’s what we had in our minds – pretty scary.”

“When we met Dr. Wehberg and he went over everything with us, my fears just melted away,” recalls Mary. “I felt totally confident and felt like I could breathe again.”

Dr. Wehberg explained that Charley was a great candidate for robotically assisted thoracic surgery. Utilizing Beebe’s da Vinci Xi Surgical System, Dr. Wehberg would be able to guide the surgical tools through just a few small incisions. The team would be able to watch the entire time and would remove one-third of Charley’s lung.

“Charley was a good candidate for robotically assisted surgery because he was otherwise healthy. He had quit smoking nine years ago and his lab work and cardiac stress test were all in good shape,” said Dr. Wehberg.

Mary and Charley met with Dr. Wehberg on a Tuesday and Charley arrived at the medical center that Thursday for the procedure.

“Everything was so smooth. All the people were friendly, they explained everything to us – it was really just a well-oiled machine,” Mary recalls.

The surgery took about two hours. During the procedure, the operating room nurse called Mary to assure her everything was going well. Mary and her friends were able to relax in the waiting room and follow Charley’s progress on the waiting room screen.

“After it was done, Dr. Wehberg came walking out and as soon as I saw him, he had a big smile on his face and he told me Charley was great,” Mary said. “I was so relieved and couldn’t wait to see him.”

When Mary arrived at the ICU room to see Charley, she expected him to be worn-out looking. However, Charley was already awake and smiling.

“The first thing he asked was if he could have some coffee! That’s when I knew he really was going to be OK,” Mary said.

“For me, it was like, I went to sleep and woke up. I felt a little sore, but it certainly didn’t feel like I had just had major surgery,” Charley said.

The next morning, Mary was still asleep when the phone rang. “It was Charley asking what I was doing,” she said. “It was 5:30 in the morning, so of course, I was asleep! Then he’s telling me to come on in because he might be ready to go home. I thought he was joking.”

When Mary got to Beebe’s Lewes Campus that Friday morning, she talked to Charley’s care team and several other groups of doctors and surgeons who were visiting to see how Charley was doing.

“There were whole surgical teams coming in to talk to us about Charley’s surgery because he was one of the first robotic surgery cases. Everyone was excited because he was doing so well,” Mary said. “Then Dr. Wehberg came in and said that Charley could actually go home that day!”

After having lung surgery at 10 a.m. on Thursday, by 12:30 p.m. on Friday, Charley and Mary were in the car headed for home.

“The whole experience was just fantastic,” Charley said. “I left the hospital and didn’t need to be on any pain medication. I think I took one Aleve the whole time during recovery. I call Dr. Wehberg my miracle doctor. He gave me the time machine – the gift of more time to spend with my family, my grandkids, and enjoy life.”

“When we heard cancer, I thought, this is it, this is terminal. It’s amazing what technology is out there today and even more incredible to have it right here at Beebe,” Mary said. “We could not have asked for a better experience – or a better outcome. We are so lucky to have Beebe. Now, I have more time to try to win at cards and we can spend more time together – even though we are never going to grow up!”

If you or a loved one smoke, Beebe offers free smoking cessation counseling in addition to its advanced lung program: www.beebehealthcare.org/smoking.