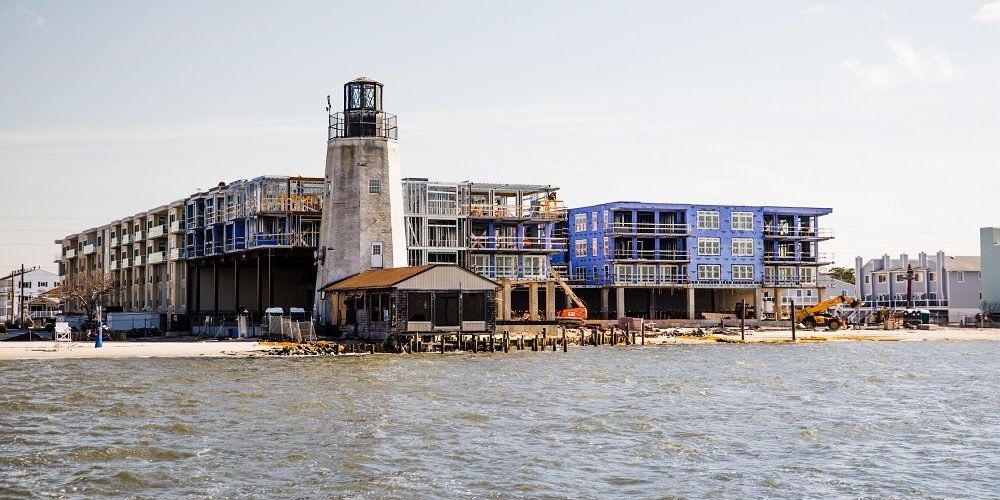 Yesterday, the Lighthouse Cove Development Company announced another milestone in the transformation of the Lighthouse Cove mixed-use resort (formerly Ruddertowne).  Following extensive engineering and marketing studies, a decision was made to reconstruct the entire Lighthouse Restaurant rather than remodel portions of the 40-year old restaurant.  As a result, the restaurant will be demolished to make way for the reconstruction of a newly designed bayside restaurant.

Plans for the new restaurant include a newly designed, casual coastal-inspired interior, complete with updated kitchen facilities, expanded seating and new bathrooms. The opening of the reconstructed restaurant is projected for March 2020. When complete, the Lighthouse Cove property will also feature a new outdoor deck bar encompassing some of the best sunsets on the East Coast overlooking Rehoboth Bay.

Demolition at the property is set to begin in early March. The process will be limited to only the former restaurant space. It will not affect the existing lighthouse structure on site. The Lighthouse will be re-built on the existing footprint.

“The demolition of the antiquated Lighthouse Restaurant will pave the way for a new, updated bayside restaurant that will complement the long list of dining and entertainment destinations in the Dewey Beach area,” said Lighthouse Cove redevelopment partner, Harvey Hanna & Associates President Thomas J. Hanna. “Even more importantly, it will serve as a critical component of the Lighthouse Cove redevelopment as it continues to establish itself among the most exciting commercial destinations on the Delaware coast.”

The reconstructed Lighthouse Restaurant is among the final phases of the greater Lighthouse Cove redevelopment – one of the largest private mixed-use resort projects along the mid-Atlantic coastline.

“Along with the new Lighthouse Restaurant, we are incredibly excited to introduce the public to our new weddings, conferences, special events and corporate retreats venue. Together, they represent some of the finishing touches to the Lighthouse Cove redevelopment,” said Hanna. “We have already begun booking weddings for the coming fall, and we look forward to officially welcoming guests for all manner of events in the near future.”

Lighthouse Cove is also home to The Residences at Lighthouse Cove – a collection of 83 Bayfront premier condominiums, complete with a rooftop pool, on-site garage parking, private balconies, and terraces overlooking both Rehoboth Bay and the Atlantic Ocean plus many other popular amenities. Sales are ongoing for the final phase of the residences, which commenced in November 2017. It is expected to be completed later this year.

About The Residences at Lighthouse Cove

Additional information about this community may be found at www.TheResidencesDE.com.