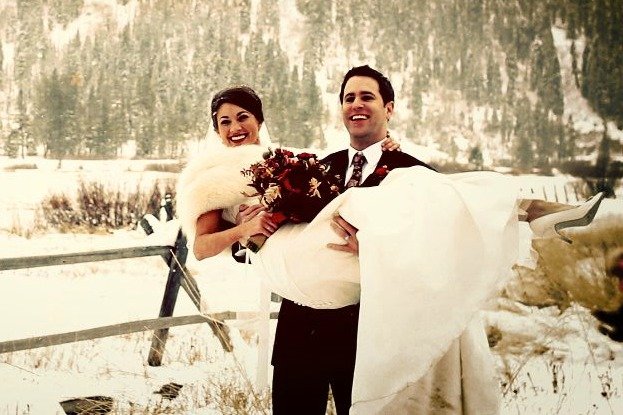 Who doesn’t love a good wedding? For the next six weeks the Shorebread staff will sit down with photographers, cake makers, dress specialists, restaurateurs, and many other specialists to uncover hidden gems of the wedding business that reside on the Eastern Shore. Weddings here don’t have to be on the beach, even though there are miles and miles of white sandy options. We’re looking for businesses that cater to the creative bride and groom and exemplify everything the shore has to offer. We hope you enjoy our coverage of Down the Aisle—Eastern Shore Style.

Recent New Jersey transplants, Chris and Karen Rogers, have created a home on the Eastern Shore of Maryland. They’ve relocated from the Garden State to Selbyville, DE,  given birth to a handsome set of twin boys less than a month ago, and opened a business in Berlin, MD that fills a void in our local wedding market. Chris Rodgers opened Forever Lucky Films (116 Broad Street), an independent, creative, and unique videography business.

“We kind of decided to move here based on the fact that The Globe had one of my favorite beers, Fat Tire,” said Rogers jokingly, but also in semi-serious tone. Berlin is quite a charming historic town that attracts many folks from other nearby cities and states. The Rodgers also saw it as a chance to bring something fresh and new to the Eastern Shore: A wedding videography and general cinematography business.

Since Forever Lucky Films opened, many Berlin locals have seen Rodgers walking his dog down Broad Street and returning to the new studio. The studio is where the creative genius behind more than 200 wedding films meets with new clients, does some editing, and displays the work of local artists. After shooting 45 weddings in one year in seven different states, Forever Lucky has yet to film any weddings on the Eastern Shore of Maryland or in Delaware, but hopes to find an interested client soon.

“I look for creative, edgy types,” said Rodgers when describing his perfect clientele. “I try to meet with the couples before I commit to filming their wedding, to get to know their personalities and traits, and then make them a great video at a reasonable price.”

In an extremely unobtrusive way, Rodgers will travel with a bride and groom throughout their entire wedding day. From before the ceremony to the first look, from walking down the aisle to the first kiss, then from the garter toss to the cake cutting, Forever Lucky Films captures it all. Each client then receives a video of highlights (lasting 4 – 6 minutes) and most choose to also purchase an extended version (50 -120 minutes in length) on DVD.

Before he even begins the video editing process, Rodgers has the entire production planned out in his mind. A song that will fit the mood, the dramatic feel of the video, the arrangement of clips – all completely in order in his head and ready to be edited.

“There are cycles in wedding trends. Clients can have so many different tastes when it comes to their wedding. One person may really like something while someone else doesn’t. I strive to create artistic, unique pieces specifically for each couple. I don’t do cheesy,” said Rogers about creating one-of-a-kind films tailored to each set of newlyweds.

Rodgers is the lead shooter and primary editor for Forever Lucky Films. Before breaking into the wedding industry, after simply filming a friend’s wedding for fun, Rodgers was busy creating an impressive resume. He had been a media liaison for a motivational speaker that traveled the country. He lived in places like New York City, San Diego, and other cities of the same sort doing freelance film projects for companies like Nike, Volkswagen, Microsoft, and Dove.

“As long as I’m filming something, I’m happy,” Rodgers commented about his past in the creative film industry. The various projects completed provided the multimedia professional with experience, a passion, and goals for the future.

Christmas came a few days early for Chris and Karen. Their favorite Christmas gift? The birth of their identical sons. For the past few weeks, Rodgers has been mostly working from home and occasionally visiting the office in Berlin. Right now, Forever Lucky Films is open by appointment only. The new father is taking advantage of editing his films from home and spending time with the little ones and his wife. In upcoming months, the filmmaker hopes to have regular business hours again.

Forever Lucky Films hopes to gain more business starting this spring. Currently, most clients are referred by past clients or by close friends. The studio is planning to expand their services and become more active in community events. With the addition of the art gallery to the studio, Forever Lucky may open their doors for 2nd Friday Art Strolls when the weather gets warmer and the twin babies settle into their new home.

“We love having our business in Berlin. We now have a central hub for our business, but still plan to travel to satisfy our customers,” said Rodgers. “As long as the customer can see their film, is happy about it, shares it on Facebook, and spreads the word – that’s all that matters.”

Find Forever Lucky films on the web, on Facebook, or on Vimeo to learn more about this wedding gem.