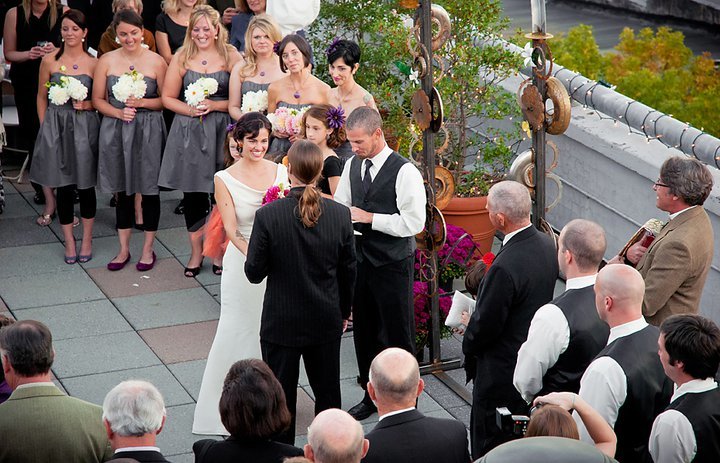 Some wedding officiants are called priests, ministers, or rabbis – Todd DeHart definitely does not consider himself any of those labels. He refers to himself as a wedding officiant; plain and simple. Today, there are plenty of wedding officiants who are not clergy and are able to create and perform beautiful wedding ceremonies. In a more modern society, spiritual weddings that do not have any form of religious affiliation are quickly gaining popularity.

“When I was a kid, I used to say, my dad has the coolest super power, ever – He has the ability to legally bind people!” said DeHart when discussing his father’s past as a minister.

DeHart admires and respects the work of his socially liberal Methodist father. Since then, the Berlin, MD local has mimicked a similar career path.

“Marrying people is something that I enjoy and take seriously. I’m providing a service for people in the beach area. I treat their ceremonies with great relevancy,” said that officiant certified through the Universal Life Church.

“The first couple I ever married were close friends. I had witnessed their entire relationship from the moment they were introduced,” said DeHart.

“The bride and groom were of different denominations and wanted a fun, yet practical wedding that their families would approve of.  That’s when they asked me to marry them.”

Within weeks, DeHart was ordained online. After a few months, he stood in front of his friends and legally married them.

DeHart likes to meet with interested clients well before their chosen wedding date. By meeting a couple, it provides a way to really determine what they want out of their wedding day. Because many couples don’t have the same affiliation to a single church, they prefer their wedding to be intimate. They want their wedding to be a basic ceremony that joins two individuals for life. A wedding officiant is responsible for creating and performing a personalized ceremony that will reflect the client’s beliefs, philosophy of life, and personality.

“I can create a personal ceremony structured around a biblical reading, a poem, a song lyric, a quote… anything the couple decides. It’s meant to be memorable,” said DeHart.

A wedding officiant should be lively and keep the energy flowing during a wedding ceremony.  Everyone should be interested in the words coming from an officiant’s mouth. DeHart is an officiant that will ensure that the vows recited on a wedding day result in everything a couple had dreamt of.

“Initially, I had just been marrying friends and friends-of-friends,” said DeHart.

Recently, he joined the Ocean City Chamber listings as a wedding officiant and as a reception DJ in hopes to work with more couples during the shore’s wedding season.  After marrying a dozen couples last spring/summer, DeHart has had several inquiries about leading couples to marriage in 2012. Most people plan a destination wedding in coordination with their traditional beach vacations.

Getting married in Maryland and Delaware is quite a simple process. State laws insist that a clergy person or minister of any religious platform may solemnize marriages officially. No registration is required in the states of MD or DE and proof of ordination may be required by individual counties. Getting married in Virginia is a little more complex. Virginia law states that a minister is required at a wedding for the marriage to be licensed and approved statewide. When all is said and done, getting hitched in Delmarva is rather a simple task to accomplish.

Don’t get caught scrambling for an officiant a few weeks before your big day. Once your wedding date is decided, secure a good officiant, like DeHart. It is known that selecting such a vital element to your wedding day can be stressful. Be prepared by asking an officiant these questions before making your final decision:

If you’d like to inquire about reserving your wedding date and meeting DeHart to discuss future wedding plans, visit Good Clean Fun Life or the Ocean City Chamber of Commerce Wedding Guide.

Read other Down the Aisle – Eastern Shore Style features:

All photos provided by Todd DeHart.