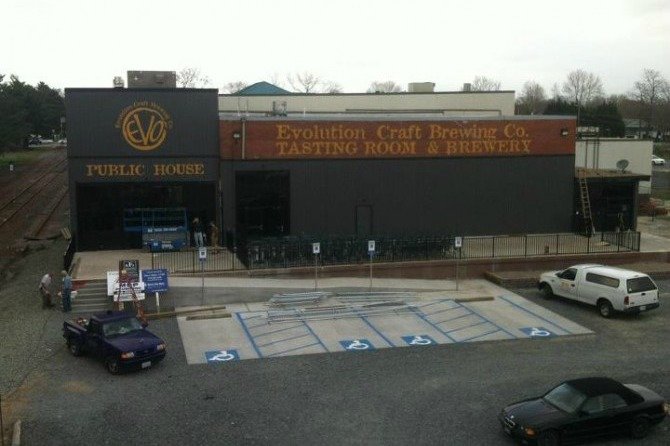 An abandoned ice factory may seem like an unsuspecting venue for the newest restaurant in Salisbury.  However, the large open space and industrial feel of exposed brick and duct-work  pair perfectly with the great food and craft brews that lie within.  Evolution Craft Brewing Company has finally opened the doors to its new gastropub, The Public House.

The new restaurant is located across Rt.13 from the hospital in the old Reddy Ice factory and will be joined by the Evolution brewing operation and tasting room in the near future.  With micro-brews gaining mass appeal on the shore, this newest venture from Southern Boys Concepts, who brought you Sobo’s, Specific Gravity, Red Roost and Boonies is sure to be an instant success.

We went for dinner during the beginning weeks, but it seems like most of the kinks that can accompany a new restaurant have already been worked out.  The uniqueness of the establishment and forethought that went into conceptualization was apparent as soon as we walked in. Our server greeted us with a Patron bottle full of water in lieu of a pitcher and explained the equally unique restaurant concept.
The concept, as I understand it, is to offer shared plates of generous portions to foster communication and camaraderie. The traditional structure of appetizer, soup, salad, and entrée has been tossed to the wind and replaced with a more casual set up. Fortunately, this is how I love to eat. Ordering a couple of things for everyone to try, and then ordering more things after that.
We looked over the menu and wanted to order everything. Chef Robbin Haas has created an enticing menu that is truly unique to the shore. There are tons of vegetarian options- yay!  I think that this is the first time that I have seen quinoa on a menu in this area- not merely a “Daily Special” sheet.
They have incorporated local, organic, and sustainable menu items and list their local partners and farms right on the menu. This is exactly what Salisbury needs.  All of the items pair nicely with Evo beers – all on tap at the large and inviting bar.  Our server had many suggestions but I can never turn down a Rise Up Stout, so I ordered that.
We started with the Pac and Cheese.  If you listen to nothing else that I tell you, listen to this- order it! Noodles, cheddar, ricotta, spinach, peas, and basil- I have literally been talking about non-stop, since. It is crave-able. You will not be disappointed. The only mistake that we made was only ordering one. It comes straight out of the oven to your table, incredibly hot.  When they tell you that the plate is hot- listen.  Even after about fifteen minutes when I tried to move the whole thing closer to me in an effort to hoard the remaining noodles, I scorched my hand. It was worth it.
The rest of our food came out shortly after. Since they don’t have a traditional course structure, food comes out when you order it. If you like eating slower or only having one plate in front of you, wait until you are done to order the next thing.  Even with a relatively busy dining room and only a few nights under their belts, food was coming out quickly and accurately.
I ordered the goat cheese and beet salad. Again, not something you can order at many restaurants in this area. The beets were roasted perfectly, bringing out their sweetness, and paired with a very generous portion of goat cheese. I was in heaven. (I like cheese – a lot.)  My boyfriend, a non-vegetarian, ordered the bratwurst. They make their own and it was apparently very delicious. It was served on perfectly toasted brioche. He was finished eating by the time I looked up to ask him how it was. Acclaim enough, I suppose.
We had to rest for a couple of minutes. The surprisingly comfortable antique church pews allowed me to lean back, giving my waistband some relief, to review the dessert menu. The first thing that I saw was a Lucky 7 Porter float. Done. Even though I was ridiculously full, my mouth watered at the thought. Beer and ice cream? Yes please. I was not disappointed. It was even better after the ice cream melted and I no longer needed the use of that pesky spoon. It was only slowing me down. The silverware is gigantic by the way. Be forwarned.
Finishing up, we reflected back on the delicious food and uniqueness of the experience.  We couldn’t believe that we were still on the Eastern Shore.  And if I wasn’t already convinced that I had fallen in love, the menu has a Jack Handy quote.  If you don’t know who that is, Google it.
Restaurants like The Public House and others, are stepping up the culinary scene in the area. On the drive home, we were already planning what to order on our next visit.
Check out their blog or website to find out more and to call for reservations.
*Photos from the Evolution Craft Brewing Company Facebook page.

Easter In Bloom: The Humphreys House