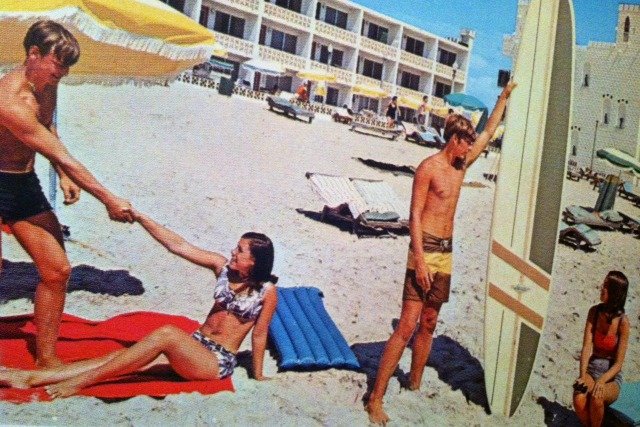 Up and down the coastline of Ocean City, MD, surf shops pepper the streets with style. From Beater boards to Sanuk sandals—that aren’t really sandals—and the many coveted clothing brands favored by grade school kids and aging surfers alike, the laid back cool, and cutting edge trends of surf style embody much of the fashion sense in this coastal community. If you are a visitor, chances are you’ve perused many a surf store to find that elemental piece to add to your wardrobe, (or your kids have begged to do so). But do you know how surf-style began, or perhaps more importantly, where you can find it at a bargain? We do, and we are only too happy to share!

Surfing as a sport had made its way to Ocean City, MD by the 1920’s.  (You can read more about it’s historical impact in this Shorebread article.) It would continue to gain popularity here, as well as in other coastal communities throughout the world, as the sport was opened up to the masses. Changes in materials, shape, and length of the boards enabled more would-be surfers to try the emerging sport. In the early 1950’s, Jack O’Neill designed what could be considered the first article of surf clothing—an early wetsuit. O’Neill had the vision to combine pieces of neoprene into vest form. Surfers could then wear the vests into the often-frigid waters, allowing them to stay out catching waves for longer periods of time. While surf clothing and accessories began as a cottage industry, as was the case with O’Neill, Hollywood, the music industry, and sponsored advertising soon followed, popularizing the look and lifestyle for the masses.

In 1958 a bathing suit company from San Francisco began manufacturing nylon shorts made specifically for surfing. The company would come to be known as SUNDEK, and many in the industry credit it to be the first established surf brand. Shortly following, in the 1960’s, surf shops began popping up in Ocean City offering boards and leashes as well as fashion suited to the sport. Early shops included the first Spyder Surf Shop in 1964, and South Moon Under, still in operation today.

Much later, K-Coast came on the scene in 1989 and is now the largest surf shop in the area housing both the sport supply and fashion aspects of the industry, with two Ocean City locations, an outlet store in Delaware at Tanger Outlets, Rehoboth, and a West Ocean City warehouse location. Other well-known surf shops include: Chauncey’s, Endless Summer, Malibu’s, and Quiet Storm.

Now that we’ve touched on a bit of the history of surf fashion, it’s time to get to the coveted insider knowledge: where to find the best deals on the surf brands you love. For years, many of the shops have been hosting Midnight Madness Sales. Years ago, word of mouth would spread the news and lines could be seen outside of the popular shops, just waiting to be let inside. Now, we have Facebook, which is how most of the shops first announce their big sales, Midnight Madness or otherwise. Below, become a fan by liking their pages, and get the “in” on the upcoming sales.Hint: They all happen towards the end of summer. An even bigger hint: Endless Summer’s Midnight Madness Sale is this Saturday, August 4th!

Additionally, K-Coast has opened up its warehouse location in West Ocean City. There, you can find deals up to 70% off of retail every week. Find out all the details, including new additions, on their Facebook page. Every retail shop also usually has at least one sale rack, filled with deeply discounted merchandise. As summer begins to draw to a close—we are in August after all, now is the time to look for the bargains in your favorite surf retailers. Surf brands like Billabong also host sample sales twice a year in their West Ocean City warehouse location—another one will be happening soon. Be diligent in your search for surf bargains, they certainly exist. Happy bargain hunting in your quest for surf style!

Featured photo from the archives at the Ocean City Life-Saving Station Museum.