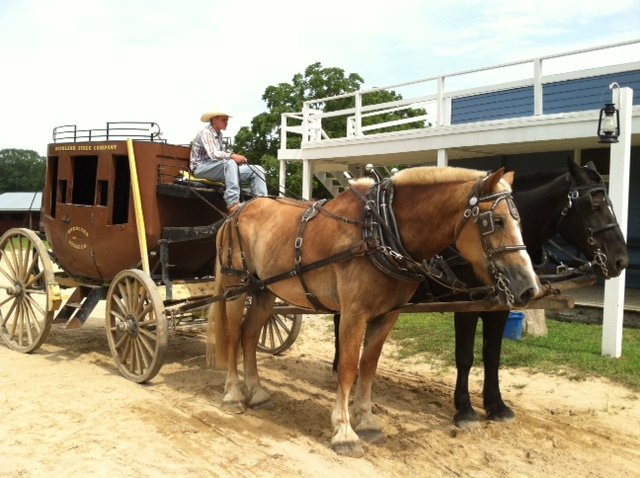 The audience, situated on sturdy wooden benches and chairs, beneath huge western wagon wheel chandeliers, watches rapt as the main attraction—the can-can girls dance their way down the stairs. A bison head keeps watch over the festivities from the second story balcony. The Sheriff and his Deputy are on hand too, to make sure the peace is kept during the show. The girls make their way through the audience keeping time to the music on their way to the yellow-velvet curtained main stage, and after a few high kicks and twirls, disappear behind the curtain for a costume change.

A disturbance is heard from the swinging saloon doors in the back. A boisterous man has entered, waving his nearly empty whiskey bottle proclaiming that he wants to see the can-can girls! The show’s host, a longhaired cowboy-type, tries unsuccessfully to quell the man, and the Sheriff and his Deputy chase him in hot pursuit around the Golden Nugget Saloon. Eventually the man is lead onstage after proclaiming himself a poet. He recites a little ditty that insults the Sheriff, before rushing backstage to snag him a can-can girl! The Sheriff and Deputy take off after him—a comic pursuit that will continue throughout the rest of the performance.

That scene was the beginning of the Can-Can Show at the Golden Nugget Saloon. Seemingly straight out of the Old West, with the sounds of real (cap) gunfire to boot, it’s actually part of Frontier Town, the popular camping ground, waterpark, and Wild West Show located on rt. 611 in Berlin, just a short drive away from the bustling metropolis of Ocean City, MD.

The waterpark area of Frontier Town is what’s visible from the roadway. The Old West is tucked back in, its relatively hidden location adding to the feel that visitors have indeed stepped away from the beach area and back into the Old West. The area is partitioned off like an old wooden fort on the frontier. And once you’ve entered through the gates, the wide dirt road of Main Street stretches out before, with buildings lining the streets reminiscent of what one would have seen in a frontier town circa 1860. An old stagecoach lumbers by slowly, making deep ruts in the road, massive horses pulling the delighted passengers along. Horses available for trail rides are kept just off the street, as are ponies, chickens, pigs, and goats all eager for a handful of corn from delighted children.

But the element that sticks out most is that the entire town is that it really is an active outdoor theater. All throughout the day the costumed staff remain in character. At any moment a jailbreak may happen, a gunfight could start in the street, or a man could be put on trial. What seems to be a simple ride on a steam powered train into the quiet woods turns out to be a scene, like most others, where crowd participation is welcome. A bank robber has hidden his trunk of gold on the train under someone’s seat, and he will not leave without finding it.

The beating of the drums and sounds of centuries old singing in Native American voices calls visitors into another part of the woods, where they will sit on huge trees turned into benches, watch Native American dances and hear stories. The Gunfight at the Ok Coral, or the unmistakable sounds of a hold-up happening at the bank may draw the crowd out onto Main Street once more.

Aside from the outdoor theater-like atmosphere, there’s the Old Mine to walk through, paddle boats to rent, an old-fashioned horse-pulled carousel to ride, and there’s even the opportunity to pan for gold.

Little cowboys and cowgirls in the making run through the streets acting out scenes they’ve just witnessed, wearing new boots and hats, and pretending to fire their cap guns at imaginary bad guys who could be lurking behind every corner. Perhaps that’s the best part of Frontier Town—watching this creative scene, miles away from the hustle and bustle, inspire the imaginations of so many kids. It’s good old-fashioned family fun.

The Wild West Show is open mid-June through Labor Day

Additional information found at Frontier Town on the web.

Check out photos in the gallery below.