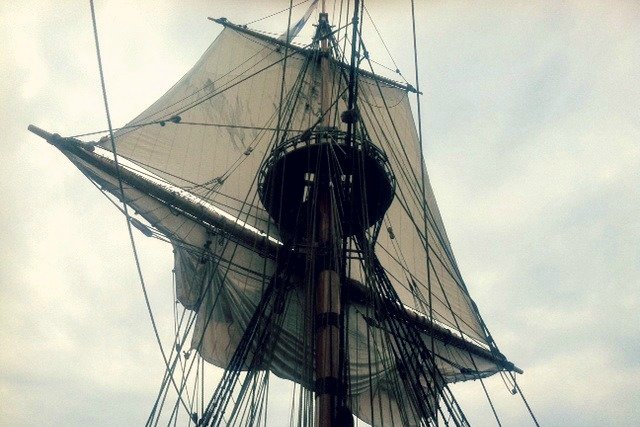 The day was humid and muggy, the air thick, the horizon hazy—which only added to the anticipation. The wind suddenly shifted and with it seemed to go the last few centuries. There, docked along the bay floated a great vessel with the flagstaff reaching 105 feet into the air over the Delaware Bay, ropes and riggings hanging below. Before us was the great Kalmar Nyckel, a 17th Century ship, looking exactly as she did in 1638 when the vessel first passed into the Delaware Bay via Cape Henlopen, bringing the first Swedish settlers, who then followed the estuary known as Godyn’s Bay to the South River, (now known as the Delaware River). These pilgrims followed the river to a point referred to as “the Rocks” where the first Swedish settlement began.

The Kalmar Nyckel was built in 1625 by the Dutch who were the great shipbuilders of the era. Her initial purpose was to be a warship. And the city of Kalmar in Sweden, jointly with another, purchased her for such purposes in 1629, giving her the name Kalmar Nyckel, meaning “Key to Kalmar.” Following her military stint, the New Sweden Company purchased the vessel in 1637 for the purposes of establishing a colony in North America. Peter Minuit, a forward thinking man, wrote a letter to Swedish Chancellor Axel Oxenstierna explaining why he thought a new colony was plausible. (Excerpted below from the Kalmar Nyckel Foundation Guidebook).

As navigation makes kingdoms and countries thrive and in the West Indies [North America] many places gradually come to be occupied by the English, Dutch, and French, I think the Swedish Crown ought not to stand back and refrain from having her name spread widely, also in foreign countries; and to that end I the undersigned, wish to offer my services to the Swedish Crown to set out modestly on what might, by God’s grace, become something great within a short time [emphasis added].

Firstly, I have suggested to Mr. Pieter Spiering [Spiring, Swedish Ambassador to the Hague] to make a journey to the Virginias, New Netherland and other places, in which regions certain places are well known to me, with a very good climate, which could be named Nova Sweediae [New Sweden]….

Minuit was granted the right to lead the expedition and after surviving terrible storms traveling over the Atlantic, safely lead the Kalmar Nyckel to “the Rock.” Minuit successfully negotiated the purchase of the land from the Chiefs of the Lenape and Minqua tribes and oversaw the building of Fort Christina. Minuit planned to lead the Kalmar Nyckel back and forth across the Atlantic for many more expeditions bringing colonists to the new land. But, as many tales of the high seas go, Minuit’s had an unexpected ending. Preferring to detour the Kalmar Nyckel through the West Indies to exchange wine for tobacco, the vessel docked at what is now St. Kitts. Minuit came across an old friend who was a Captain of a nearby ship. Minuit was dining with the Captain on his ship when a hurricane suddenly came upon them and swept the ship out to sea, never to be seen again. The first mate assumed control of the Kalmar Nyckel, which had survived the storm unfazed, in the wake of Minuit’s disappearance. The Kalmar Nyckel returned to Sweden, arriving 16 months after she left.

The Kalmar Nyckel made three additional round‐trip crossings of the Atlantic on behalf of the New Sweden Company, totaling four cross-Atlantic trips, more than any other ship of the colonial era. In 1644 she again went into service for the Swedish military as a vital part of the Swedish-Danish War. In 1651 the Kalmar Nyckel was decommissioned and sold from the Swedish government to a private Danish merchant. At this point, she disappears from recorded history, but is thought to have sunk perhaps in the Baltic Sea.

In fact then, the ship docked that recent day on the Delaware Bay, at the Cape May-Lewes Ferry Terminal is not the original, but a full-scale recreation of the famous Kalmar Nyckel. According to the Kalmar Nyckel Foundation, the ship serves as,

“The Delaware region’s floating Academy and Goodwill Ambassador. The ship provides a unique platform for the Foundation’s educational programs, offering the best in recent scholarship and experiential learning.”

Measuring 93 feet on deck and with a sparred length of 141 feet, the recreated Kalmar Nyckel is made from Douglas Fir, Purpleheart, South American Locust, Hackmatack, galvanized steel, and lead. She has ornate carvings—a monkey with a beak, lion’s heads, and angels that all serve in various ways, to keep watchful eyes over the ship and her crew.  She can sail with a capacity of 49 brave souls, or dock for a party or educational experience for 90 people. She is served by 300 volunteers and her current Captain is Lauren Morgen. Her crew lives on board the vessel, taking their meals just as the crew who first came to Delaware in 1638 would have. And she is currently docked at the Cape May-Lewes Ferry Terminal in Lewes, DE through Sunday September 9th.

All who board the Kalmar Nyckel can expect an authentic experience aboard a 17th Century Tall Ship. The crew climbs the riggings to the mast and even the flagstaff, just as they would have centuries ago. Passengers assist with the raising of the sails, pulling the massive ropes to hoist the sails while singing age-old sailors’ tunes. A glimpse under the deck reveals the private Captain’s quarters; the crew spins yarns about the ship’s illustrious history, as well as life at sea. The experience lasts two and half hours sailing out over the picturesque Delaware Bay, and one can’t help but wonder how much it’s changed in the nearly 375 years since Peter Minuit and the Swedish settlers first sailed these waters just off Cape Henlopen.

The original Kalmar Nyckel rivals the Mayflower in terms of historic significance. The recreated Kalmar Nyckel spends her days not just in the Delaware Bay, but also at ports all up and down the East Coast from Maine to Virginia, taking on passengers of all ages for hands-on 17th Century sailing expeditions, offering a real glimpse back in time. She acts as a roving classroom, a time machine to the very beginnings of this country, and cultural steward to thousands of people from all over. Although it’s safe to say she probably has a soft spot for Delaware, where it all began.