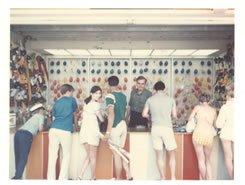 Big names are soon to make the trip to Ocean City, MD. Susan Sarandon, Amy Sedaris, John Hannah—a trifecta of star power and talent, these actors are all part of the soon-to-begin shooting film, Ping Pong Summer. But these well-known actors are actually stepping in as the supporting cast. The lead roles are all to be played by teenagers, and most are from Maryland. A 16-year-old Ocean City local is reported to be playing Stacy, the female lead.

Ping Pong Summer is a coming-of-age comedy centered around a summer vacation to Ocean City, MD in 1985, ping-pong, and hip-hop. In order to be as realistic as possible, most of the teenage leads are non-professional actors. The idea was to find typical teenagers so that they could accurately portray, by sheer personal experience, the reality of adolescence. George Rush, the film’s producer says despite being non-actors the teens cast all, “have charisma, and the right look.”

The right look is a critical element in a period piece.

“We don’t want this to be a parody; we want it to illustrate authentic 1985,” explained Rush.

“Not everyone dressed like Madonna, if you lived in the 1980’s, look back through old family photos – that’s the 80’s most people lived,” furthered Rush.

The other central character in the film, perhaps even more so than the teens who carry the film or the star power behind it, is the Town of Ocean City, MD. In Writer/Director Michael Tully’s mind, this movie always had to be filmed in Ocean City, because it is Ocean City.

“Writing a movie like this, you aren’t supposed to be location specific. You are supposed to go and shoot where it’s cheaper, which is why so many ‘New York’ movies are actually shot in Vancouver,” explained Tully.

But in this case, authenticity in location proved to be key.

“Ocean City is as defining an element of the film as the characters,” added Tully.

Tully wrote the script based around his family vacations to the East Coast resort in the 1980’s. In speaking of his fond vacation memories Tully recalled,

“I had three older sisters. We packed up the car and headed out. It’s the one thing I really looked forward to was that once a year vacation to Ocean City.”

Those memories also included many of Ocean City’s well-known establishments, which will now serve as shooting locations for the film’s various scenes. Included in the present shooting list are Paul Revere Smorgasbord, Phillips Crab House, the Greene Turtle, and of course, Ocean City’s famous Boardwalk.

Rather than having to recreate an entire town to illustrate the era accurately, as many film productions must do, Ping Pong Summer is able to use the timeless backdrop of Ocean City, and many of the locally owned businesses that have been in place for decades, to create Tully’s vision. Using as many authentic locations as possible will really help to give the film a real sense of place.

“Ocean City has a timeless, nostalgic quality to it. It lends itself to a period piece quite well,” said Rush.

Rush, a West Coast native who had never been to Ocean City before, was blown away by what he referred to as, “Maryland pride.”

“One of the first things we had to do was get clearance from the University of Maryland because there were terps everywhere,” said Rush.

“The community here is just so embracing. People are excited and they don’t find us filming to be a nuisance,” said Rush, as can sometimes be the case.

Many of the people involved in the film in addition to Rush, had never been to Ocean City. But they accepted Tully’s intention to film here, without question.

The somewhat remote filming location—for actors and producers living in New York and on the West Coast anyway—the group has a unique opportunity. It’s not like shooting in New York where most of the cast just goes home. This is a true on-location experience where the cast and crew will become immersed in their surroundings.

“With everyone being here, it has a summer camp feel. This is how I like to make movies,” said Tully.

Sarandon plays the “mentor figure.” And as Tully explains, the character wasn’t always in the script.

“For years there wasn’t even a Mr. ‘Miyagi’ figure. And typically in films, that figure isn’t a female, “ explained Tully.

But once the character was written, Tully started reflecting on possible casting choices. Recalling Sarandon’s long and successful career he thought,

“Who’s an awesome actress who also happens to co-own a ping pong club?” Naturally the part seemed made for Sarandon.

Tully is friends with Jay Duplass, who directed Sarandon in Jeff Who Lives at Home. Duplass passed the script to Sarandon and after reading it, she signed on.

“She [Sarandon] didn’t respond just to ping pong, but thought that it was a cool coming-of-age movie. It’s not just about ping pong, the 80’s, or hip hop. They all meld together in this film,” furthered Tully.

Sarandon, like the rest of the cast and crew isn’t working for her usual fee. All involved are working for scale—way less than what they are worth, says Tully. More testaments to the fact that they all believe in Tully’s vision.

“If you break down the in-kind services our budget would be at least triple,” explained Tully.

But it’s not really about the budget; it’s about so much more.

“When you make a movie it matters how good it is, not what it cost,” said Tully.

If time and passion serve as indicators, Ping Pong Summer may turn out to be quite good indeed. Tully has been working on the film’s script for close to 20 years, and was recently reminded of that fact by a classmate.

“I just received a Facebook message from someone who heard about the movie and remembers me writing the script in Spanish class in high school,” said Tully.

Tully has a favorite quote he heard along time ago, which could define the sentimentality and nostalgia of Ping Pong Summer,

“’You just keep telling the story your brain forms at 12; I’m guilty of that,” Tully said, laughing.

Tully’s Ping Pong Summer is certainly based on his memories, but its potential for mass appeal centers on the fact that millions of people vacation to Ocean City, MD every year and carry back with them that same sense of nostalgia. And who wouldn’t want to relive their childhood summer vacations by seeing it all played out on the big screen?

For those who would like to be involved with the film:

Kids and adults of all ages can audition for small roles FRIDAY, SEPT 7th, 4:00-9:00PM at the 67th Street Holiday Inn Oceanfront in the Marlin meeting room. A main supporting role still needs to be cast. If you are a Caucasian teenage female between the ages of 15 – 18, you are encouraged to try out. If interested email pingpongsummercasting@gmail.com to reserve your time.

Ping Pong Summer is looking for:

Extras: Mainly kids and teenagers to re-create what the busy boardwalk would look like in 1985. Hopefuls are asked to dress in authentic 1985 (or pre-1985) clothing (remember, no cliché outfits), take photos and email them to pingpongsummerextras@gmail.com

Items: Authentic memorabilia, pre-1985 cars, clothing, concert posters, sports items – anything reminiscent of the time period. If you have items for consideration, email query/photos to pingpongsummerstuff@gmail.com