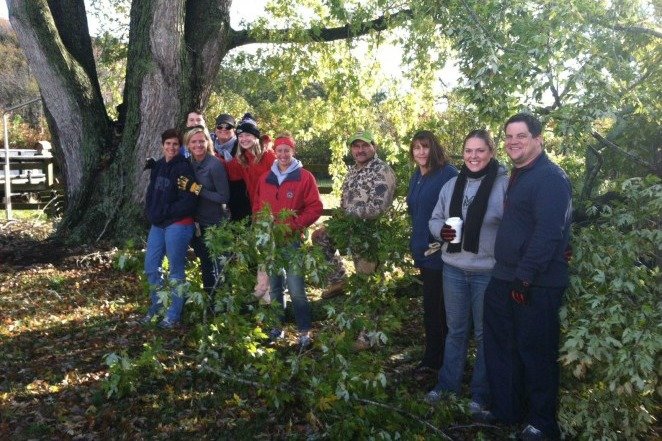 All throughout the day Monday, October 29th, residents of the Ocean City, MD area sat glued to their computers, TV’s, radios, or smart phones—whatever bit of technology they could rely on for information about the storm of epic proportions bearing down on the Eastern Shore. Beginning with the morning high tide cycle, the system dubbed the Storm of the Century, Frankenstorm, or simply Hurricane Sandy, had already caused epic waves and extreme flooding. Downtown Ocean City south of 17th Street had been evacuated, reports circulated that Route 1, the coastal road north, was closed, and areas all over the Delmarva Peninsula, including Fenwick Island, DE and Salisbury, MD were reporting severe flooding. Images taken during the storm and shared via social media showed residential areas of Ocean City with homes taking on water well into their first stories. Popular local businesses were flooded, some damaged, and Sandy wasn’t over yet.

Watching the storm unfold in real time and through the shared images, filled with the same sense of concern as thousands of collective others, Colby Nelson-Kauffman, a 20-year veteran of the Ocean City Beach Patrol, chose to act. At 5pm that Monday she started an open Facebook group called Sandy Clean Up Help. Nelson-Kauffman went to sleep that night like everyone else in the region not knowing how extensive the damage would be in the morning. On Tuesday, the rain lifted, the skies were still dark but beginning to clear, and Sandy Clean Up Help had 2,500 members.

“I do believe that although I was the first person to start the group, it was already on the minds of everyone else,” said Nelson-Kauffman, who has witnessed the group, which she initially intended as a forum for people to post what clean-up help they needed, and be immediately connected with someone who could offer assistance, morph into something much bigger.

“I said, ‘let’s take this to Delmarva – there’s people all over in Delaware, in Wicomico County, too, that need help. We should make it open to businesses as well,’” recalled Lawrence, who then put her social media skills to use bringing awareness to the group, by using targeting Facebook advertising to garner an immediate response from DE, MD, DC and VA.

Social media played an integral role of making this relief effort, a reality. People would post on the group page if they had something they needed, and the information was then reposted on the fan page. The group’s focus on their first projects was based on initial need. Downed trees and limbs turned into a call out for a chainsaw team—which was very quickly put together. The first business call came from Bayside Jet Drive on 52nd St, a business dealing with the after-effects of flooding. From there, the requests just kept coming in, with more projects in Ocean City and Fenwick Island. Emails came in from businesses, and not just in the immediate area. The first came from a farmer in Somerset County faced with extensive crop damage.

“It was just a synergy, from word of mouth with the people who were helping. And then we used social media very aggressively. We tagged photos of the relief efforts and it really took on a life of it’s own because of Facebook,” explained Lawrence.

The group had a busy three days or so, then had a lull over the weekend. Which turned out to be another type of calm before the storm. The group was about to take on an enormous transition. Instead of just offering manpower and services to help clean up, people wanted to offer donations.

Right around the same time, Nelson-Kauffman was put in touch with a contact in Crisfield, MD, learning about the roughly 150 homes that had to be condemned. The group’s focus quickly shifted from clean-up, to relief. Initially hoping for two donation locations for drop-offs, at least a dozen local businesses stepped up including The Globe in Berlin, MD, the Pro Shop at Glen Riddle, South Moon Under, Signs by Tomorrow in Dover—locations all over the shore.

Lawrence and Nelson-Kauffman were filmed at one drop off location, Bayside Retirement Community on Rt. 54, for the WBOC Morning Show, garnering an immediate response from the community in Salisbury and an offer for another drop-off location.

“A lady visiting from DC went into Pool-Tech to donate some items. She [later] called and asked if she got her own truck and driver, could she bring it down filled, from her area? She put out an email blast and is bringing down a truck later this week,” said a thrilled Lawrence, who also credits the Days Inn in Ocean City with another huge donation—of 26 couches.

All in all, three 14-16 foot trucks containing furniture, clothing, baby items, household items, food and water, along with numerous trailers were delivered to Maple Shade Youth and Family Services and the Church of God in Crisfield, MD. The volunteers have spent days distributing goods, and just helping out in any way they can from ripping up carpeting to hauling out and replacing ruined appliances—anything they can do to help the many families who are now without.

“A couple walked in to Maple Shade with an infant wrapped in a blanket and walked out with warm clothes, a stroller and huge smiles on their faces. That really touched the volunteers, to see the children that have been affected,” Nelson-Kauffman recounted, shedding a bit of light on the real people affected in Crisfield.

Both Lawrence and Nelson-Kauffman are quick to point out that the work of this group is the result of the efforts of many. As Lawrence said,

“I have encountered so many people over the last few days that have echoed gratitude and admiration for all that we have done. To that, both of us feel strongly that the community did this, the collective pulse of so many humanitarians in our own backyards and on Facebook helped give this project life and pushed for it to be more than either one of us could have expected.”

Nelson-Kauffman admits that the group has become something bigger than she ever expected, and she couldn’t be happier about it.

“To see our community come together to help our fellow man is a beautiful experience to be apart of. That’s what life is all about isn’t it?  One man we helped said we ‘restored his faith in society.’ That was very powerful for us all to hear. “

While the clean-up and relief efforts may be winding down sooner here than in New Jersey or New York, that doesn’t mean this group is going to close up shop. And they may soon begin to concentrate their efforts north.

“There are many local businesses and groups gathering to go to NY and NJ and they can post on our page or let us know and we can help try and rally volunteers. I would love to try and get stuff to the firefighters and police families in Queens, if we could,” said Nelson-Kauffman, about the group’s future plans.

In the meantime, Sandy Clean-up Help Across Delmarva will be hosting a benefit at Burley Oak in Berlin, MD on Monday, November 12, from 9pm-2am featuring a raffle and guest bartenders; donations will be accepted throughout the entire day.

If you would like to assist Sandy Clean-up Help Across Delmarva, keep up-to-date with needs and volunteer opportunities by liking the fan page, or joining the Sandy Clean Up Help group.

You can see their efforts first hand in the images included within this article. Photos from the Sandy Clean-up Help Across Delmarva Facebook page.