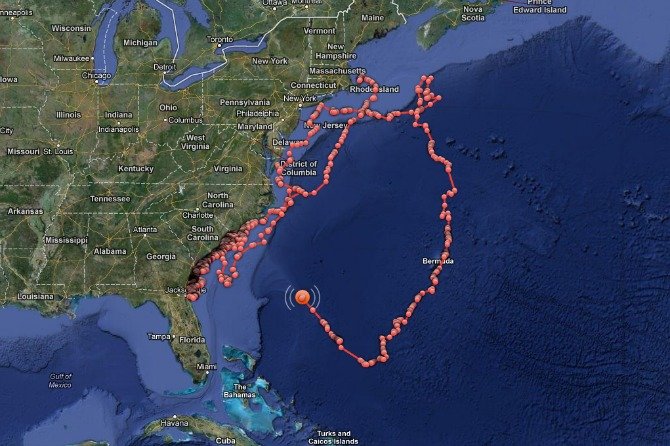 The 16-foot great white shark, Mary Lee, that passed by Assateague and Ocean City in late January is causing people to talk once again. Have no fear, this time no one is talking about Mary Lee coming near our coast, but instead, people are trying to figure out where she is headed next.

The 3,500 pound shark was tagged last September off the coast of Cape Cod. She then traveled south along the east coast through the fall and early winter before circling back and heading north in January. Mary Lee is fitted with a transmitter that enables the OCEARCH team to track her migrations. The transmitter is attached to Mary Lee’s prominent dorsal fin and ‘pings’ occasionally. The transmitter’s pings are then mapped on the group’s website.

During the week of January 26th, Mary Lee was tracked along the mid-Atlantic coast. She casually swam past Chincoteague, Assateague, Ocean City, and the Delaware beaches and was in Long Island less than 5 days later.

Over the past few weeks, Mary Lee has swum north – returning to Cape Cod – and then switch directions. This time, the great white chose to swim south away from the shoreline. According to maps of the seafloor, it looked as though she was following deep trenches in the ocean floor as she swam back towards warmer Caribbean waters.

Earlier this month, another female 14-foot great white was tagged by OCEARCH. Her name is Lydia.

Speculation has arisen that Mary Lee and Lydia might meet somewhere near Bermuda. Mary Lee swimming south, Lydia swimming north-west from Florida. What’s taking the sharks towards the islands?

“I think Lydia is a homebody and Mary Lee is a traveler. She acts like she knows where she’s going. It’s so fascinating to observe!” commented Suzanne Johnson on the OCEARCH Facebook page recently.

Mary Lee has continued to surprise all of those who have been following her quest online.

“Mary Lee is one well-traveled shark. I’d like to know what she has been feeding on while offshore?” questioned Ken Lee, a dedicated OCEARCH visitor.

Ocean City locals have been paying close attention to the shark after she was a topic of news in January. Do you think she will continue south west and swing into the Gulf of Mexico or turn hard to the west and in towards Florida’s Atlantic coast? Do you think she will meet up with Lydia or pass her by somewhere in the warm water? 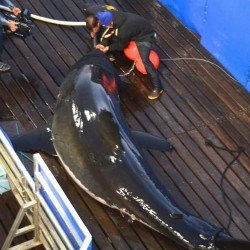