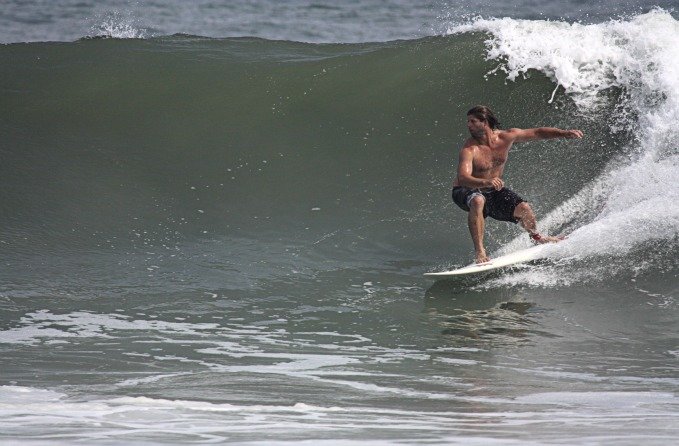 The Mayor and City Council approved this week the Surfing Beach Committee’s recommendation to expand the two rotating surfing beaches during times of good surf and have the Inlet open to surfers on a conditional basis on the weekends during the slower times of the summer.

One of the options suggested by Surfing Beach Director Ward Kovacs was to widen the surfing beaches on days with good surfing conditions.

“Because what happens on good surf days, we get more and more surfers out there and it gets too compacted where there are concerns of people getting hurt …” Councilman and Recreation and Parks Chair Joe Mitrecic reported this week.

Prior to the Mayor and Council meeting that evening, the Surfing Beach Committee reconvened on Monday afternoon to review four proposed rotating surfing beach schedules.

The second version includes the standard rotation, the Inlet open to surfers Monday through Friday but adds a third surfing beach into the rotation at a midway point between the north and south locations on Saturday and Sunday while the Inlet is closed.

The third version includes the standard rotation, but the Inlet open to surfers all week long in late May, June and September. It excludes the Inlet being open to surfers during the busy months of July and August at which time a third surfing beach will be added to the rotation at a midway point between the north and south locations on Saturday and Sunday.

The final version includes the standard rotation and adds the third surfing beach permanently at the Inlet to be open to surfers every day, except 4th of July, from late May through September.

Ocean City Beach Patrol Captain Butch Arbin passed around photos of the Inlet beach on 4th of July and on a random summer day with high temperatures where there was not an empty space to be seen in the water or the beach. However there was no wind, thus no waves, resulting in no need for surfers wanting to use the Inlet. If the Inlet were to be open to surfers on days with good surf conditions, beach goers and swimmers would be pushed about 50 percent to the north for the beach to be open to surfers.

“Version three is probably the most doable if we want to keep the Inlet beach open,” Arbin said. “When you add the third surfing beach, people are going to be impacted disproportionately. It’s going to happen … and version three is that hybrid model where we use the Inlet as often as we can. If we chose that one, we can monitor it by looking at how the crowds are affected by it.”

Councilman Dennis Dare and Mitrecic were quick to notice by adding a third surfing beach midway between the north and south locations there will be properties, such as the Quay and the Capri that will have a surfing beach located in front of their facility more than twice in less than 18 days apart.

“I think the compromise is expanding [standard rotation locations] when we can,” Shelly Dawson of the Surfrider Foundation said. “To ask to have another beach added and have people hit three, four and five times anywhere in town is unfair for us to ask for.”

Chris Shanahan of K-Coast Surf Shop reminded the committee that was what the surfing community had asked for — more space on the beach. He added the guards and equipment are already set up for the standard surf beach rotation and it would save the town the extra cost in initiating a third surfing beach in the rotation.

“I would start out with a bigger surfing beach and if the conditions don’t pan out the way its forecasted then we will bring it in,” Kovacs said.

As far as keeping the Inlet surfing beach open during the slower times of late May, June and September on the weekend, the committee felt exchanging the word “closed” for “conditional” would do the trick. This would mean during those months when surf conditions are good on the weekend at the Inlet the beach patrol will make the call to have that location open to surfers or not, except June 29 through Aug. 24 the Inlet will remain closed on the weekends due to the expected crowds.

The committee voted unanimously to send a favorable recommendation to the Mayor and City Council to approve the 2013 Surfing Beach Schedule as a modified version of schedule one. The Inlet beach will be open during the week days, conditional on the weekends in late May, June and September and closed on the weekends in July and August. The standard rotating schedule will stay in play and at times of good surf will be expanded to provide surfers with more space.

A few hours later during the Mayor and City Council’s legislative session, Councilman Doug Cymek made a motion to approve and the council voted 6-0, with Councilwoman Margaret Pillas absent, to go with the changes presented.

Shorebilly’s Swill: An Encore Trip to Salisbury’s Festival of Swine – Pork in the Park