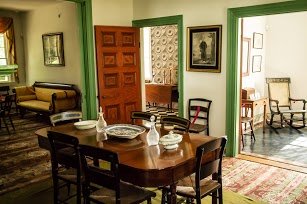 Sounds absurd right? Not at the turn of the 20th century.

Shore Bread went Day Trippin’ this week, traveling back in time by way of the Calvin B. Taylor House Museum in Berlin. The museum is home to a plethora of fun facts and artifacts from the late 19th and early 20th century’s, with a little bit of everything from antique wheelchairs to original artwork. Here’s a sneak peak at just a few of the interesting treasures we uncovered…

The Taylor House is located on Main Street in Berlin, nestled at the heart of the town’s National Register Historic District. Now, if the first thought that popped into your head was, “are you talking about Taylor Bank?” the answer is yes and no. The museum’s namesake pays homage to the bank’s founder, and one of the original residents of the house, Calvin B. Taylor. Curator Susan Taylor explained that the house was named after Taylor, “mostly because he was the most famous person who lived here.” 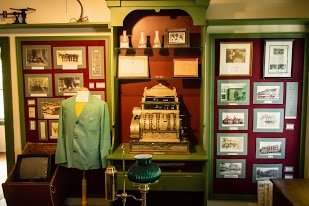 Built in 1832, the house was home to a few other occupants before Taylor and his wife, who lived in the house from the 1890’s until 1932. Taylor had a lasting impact on the community as not only a lawyer and a teacher, but also as the founder of the Calvin B. Taylor Bank, which still serves area residents today.

The house changed hands many times after Taylor’s death, and by the 1980s it was vacant and on the verge of being turned into a parking lot. “It was at that time that a large group of people started working to save the house and thankfully, they did” explained Taylor. The group, known as the Berlin Heritage Foundation, convinced the Mayor and Council to purchase the house and turn it over to the Foundation to administer as a town museum. Over $100,000 was raised between private donations and community fundraisers. “We really had a lot of support from the local community” added Taylor.

“The first thing we did was to try and rip everything out and then match it back to how it would have been.” The front and main block of the house were restored and furnished to replicate the house exactly as it would have been lived in. “The idea is that this is how the house would have looked in the 1800s.” The front of the house is a near-exact replica of how the Taylor’s would have lived, right down to the restored wood and antique furnishings. “You can almost picture the ladies sitting right here by the window doing their needlework” described Taylor as she pointed out the various pieces and features of the front rooms.

While the first and major exhibit is the house itself, the back half and second story of the museum are chocked full of smaller exhibits highlighting the charm of the times. You’ll find clothes from the early 1900’s, handmade quilts, antique medical tools, and even a magicians black box and electric shoes.

The back section of the museum, the Harrison Room, is dedicated to the history of the Harrison family. “It may seem kind of confusing since we have a whole room about them, but they never actually lived here,” explained Taylor. While no Harrison ever actually resided at the Taylor House, the family had a broad-sweeping influence on Berlin. The Harrison Nursery was the largest nursery in the world during the early 1900’s, with over 5,000 acres of farm land at one point across Maryland, Delaware and West Virginia. The nursery eventually closed in the 1960’s after a devastating peach blight, at which time the Harrison family transitioned full-time to the hospitality business. In fact, the same Harrison family now owns some of the resort areas’ favorite hotels and restaurants (Harrison’s Harbor Watch, The Holiday Inn at 17th Street, the Hilton, to name a few) But back to the 1800’s…

One intriguing find in the Harrison room is the Cosmopolitan Magazine cover shot of Linda Harrison, a Berlin native who not only holds bragging rights as Miss Maryland but also as a movie star. Harrison was a local celebrity turned national celebrity after starring in such movies as Cocoon and the original Planet of the Apes. Photos of her posing with Carey Grant and President Nixon are a few of the Hollywood-style items situated around the exhibit. 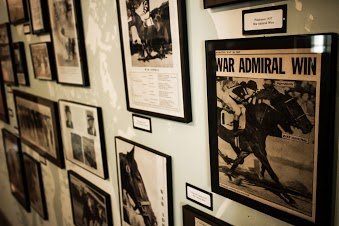 Other popular exhibits include the racehorse section, located upstairs, which is dedicated to famed racehorses Seabiscuit, Man O’ War, and War Admiral. “When Seabiscuit came out, we quickly realized that we had a local connection,” said Taylor, pointing out that Seabiscuit and rival War Admiral were actually the grandsons and sons, respectively, of local horse and champion Man O’ War – owned by area resident, Sam Riddle.

Seabiscuit and Linda Harrison were not the only splash of Hollywood to bring a little notoriety to our area, Runaway Bride also brought a renewed curiosity to the historic downtown sections of Berlin. Many visitors still come through Berlin and through the Taylor House after a peaked interest from the movie, Taylor explained, adding that many people are fascinated by the quaintness and the preserved history. “It’s a different way of life really,” she noted. “With the restored homes, the restaurants, and the neat shops, it’s a destination of its own.”

Upstairs we quickly found ourselves lost in the Images of the Past exhibit, which features photographs and memorabilia from 1900 to 1950, with a comprehensive display of the quaintness and historical charm that draws many visitors to Berlin, as well as, to the Taylor House Museum. “Basically what we did was gather and read fifty years of newspapers,” said Taylor. Our favorite is easily the newspaper timeline, which features a variety of local and national stories pulled from 50 years’ worth of newspaper clippings – including a few quirky local stories. Case in point, a story on an Ocean City woman who was dipped in a 3’ deep pot of tar by a mob of fifty residents because her “mode of living offended people.” Or the group of boys sent to church as punishment for their candy heist.

Another favorite artifact? The men’s bathing suit on display – a 100 percent wool, one-piece. It’s hard to imagine catching too many waves, or ladies for that matter, in a wool onesie.

We could go on and on with the list of fun finds tucked inside the Taylor House Museum, but we suggest taking a day trip to Main Street yourself. “We add a little bit each year. People really seem to be interested in what we have here,” Taylor said, adding that the museum sees a couple thousand visitors come through their doors each summer, particularly through the Concerts on the Lawn , the Berlin Peach Festival, and other such fundraisers and events held throughout the year.

Even kids find themselves fascinated by the journey into the past, noted Taylor, adding, “I’m always amazed with how interested the younger kids are.”

While one could certainly spend hours perusing the Taylor House Museum, there’s plenty of other places to visit while in Berlin. Taylor pointed out that the Taylor House is a great place to start on an informal tour of Berlin. “There’s just so much to walk around and see after learning about it here first.”

Other noteworthy stops include the area shops and restaurants, along with some of the other historical hot spots. For more information, contact the Berlin Chamber of Commerce or The Taylor House Museum. The museum is open from Memorial Day through the end of October – Monday, Wednesday, Friday and Saturday from 1 to 4pm. Group tours are available during the off-season. Tours are free with a suggested donation of $2 for adults. 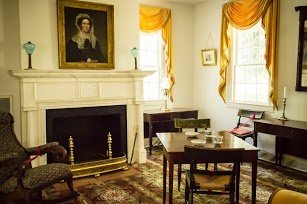