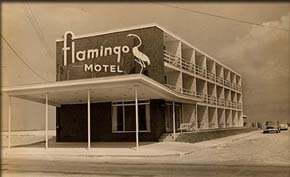 In the business world, particularly in the hospitality industry, it’s not often that you hear these words. Ocean City has seen its fair share of changes over the years, with restaurants and hotels coming and going with the tides; which is why we love the family-owned and operated businesses that serve as a symbol of our town. The Flamingo Motel is celebrating its 50th anniversary this year, which marks not only 50 years in the business, but 50 years operating as a family-owned business. ShoreBread sat down with Joel Brous this week, reminiscing on 50 years of Ocean City hospitality, and looking forward to the next 50.

The Flamingo Motel has been a part of the Brous family since 1963, when Joel’s father, George, bought the motel, just one year after it was built. Starting with just 23 units, the original building still stands, 50 years later. Today, there are three ocean-view buildings, housing 112 units, along with an indoor and outdoor pool.

Before buying the Flamingo Motel, George spent the late 1950’s working at the Holiday House on 8th street, which his parents owned at the time. When the opportunity to buy the newly built Flamingo Motel arose, George took it. However, in the 60’s, 31st Street wasn’t exactly a prime location. “At that time, 8th Street was the thick of it,” said Brous. “This seemed so far north, it felt like you were practically in New Jersey.” While it’s certainly hard to imagine a time when 31st Street was “too far north” in Ocean City, 50 years ago, Ocean City was a different town.

“No one booked ahead, they just showed up,” explained Brous. In fact, Brous continued, it wasn’t until the 80’s that people started to call ahead and make reservations. It really wasn’t until the past ten years that the reservation system changed drastically. Now, everything is done via the internet, and while it certainly helps bring in more bookings, Brous acknowledged that the personal touch is lost.

That doesn’t mean there aren’t still a loyal group of visitors that return to the motel each and every year. “There are a lot of them that we know by name, or that we’ve gotten to be good friends with over the years, from generation to generation.” Many of the relationships that they have forged go beyond summer vacations, evolving into lasting friendships. Growing up in the motel, Brous has developed strong relationships with many of his customers, considering the motel a true home away from home.

For locals, it’s no secret that Ocean City business trends have changed over the years, and as a local business owner, Brous has witnessed many of the ups and downs within the industry. Business-owners often lament that the season is shorter, and that the days of week-long bookings are long gone. “The season has definitely gotten shorter,” agreed Brous.  “It’s more of a five-week season now.” Brous attributed the shorter tourist season to school dates. With kids getting out of school in mid-June and returning before Labor Day, the window of opportunity to capitalize on family vacationers seems to get narrower and narrower. Add in the increased interest in sports, with kids spending a majority of their summer in sports and training camps and the result is a decrease in family traveling. A weakened economy certainly hasn’t helped matters over the past few years, added Brous. “The window gets smaller and the rates end up being higher. But you’ve still got to make your season, so it is what it is. People are watching their money and it makes sense. They come when it’s cheapest, when there’s a better value.”

Securing better values for their customers is one way the Flamingo Motel stays competitive. Value packages and specials draw visitors in, year after year. One particular special has been a tradition at the Flaming Motel since 1988. Brous explained that his mom crafted the idea for their 25th Anniversary – $25 standard rooms. They decided to continue the tradition every spring, with each passing year…$26 rooms, $27 rooms, and so on, all the way up to this spring, where guests were offered $50 rooms. “For the past 25 years we’ve continued with that and it’s been really great for the spring. It brings guests in during the spring, and encourages them to book with us and come back during the summer to stay with us.”

Location has also been on their side, added Brous. Located on 31st Street, the Flamingo Motel is just steps to the beach, a short walk from the boardwalk, across from Jolly Roger, and in close proximity to any number of great restaurants. “The families like it because we are close to everything but we’re not in the thick of it. There are not too many crowds. It’s really an ideal spot.”

Come Columbus Day, the Flamingo closes its doors for the season. While they used to stay open year-round, it simply isn’t feasible anymore with high heating costs and reduced winter visitors. That doesn’t mean they don’t stay busy, pointed out Brous. “We do a lot of maintenance and renovations and we try to do a couple projects each year. You’re almost busier in the winter. As soon as you get closed you’re getting ready for the next year.”

As for a third generation of Flamingo Motel-iers…”they are still too young to tell,” said Brous. While his oldest of four kids works part-time at the motel, only time will tell if any of his kids decide to take the same path that their grandfather started down 50 years ago. For now, the Brous family continues to enjoy each summer with their guests at the motel, looking forward to 50 more years of successful summer seasons.