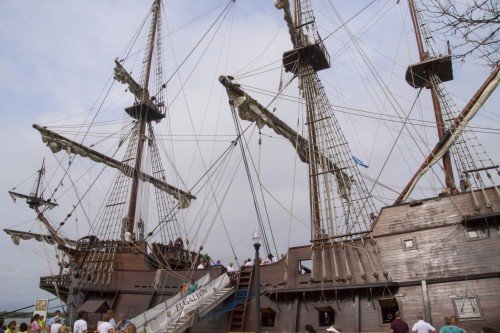 Crowds were teeming aboard the El Galeon Andalucia this morning, as the tall ship enjoyed its first full day in Ocean City. Excited guests of all ages were boarding the Galleon. “That’s awesome. Really, really great,” “definitely worth seeing,” and “so cool to see in Ocean City,” were just a few of the sentiments overheard while ShoreBread waited to board the massive vessel. Visitors were anxious to get a firsthand look at the ship that received a bit of hype earlier this week, when the ship was left lingering off our coast waiting for higher tides before crossing from the ocean into the bay.

“There was an unusually low tide yesterday as a result of a full moon. The water levels were about four feet below what they normally are,” explained Director of Public Relations Cathy Bassett of the delayed arrival. The ship was scheduled to arrive on Tuesday afternoon, but ended up making its grand entrance on Wednesday instead with the assistance of Captain Greg Hall of Tow Boat US and the Ocean City Fire Department boat.

Docked in Ocean City at the Bayside Pier between 3rd and 4th streets, the Galleon is now open to the public and will remain open until September 3. Admission is $15 for adults (13 and over) and $11 for children (ages 6 to 12). Tours are available daily, from 9am to 5pm, with special sunset hours on Friday from 6pm to 9pm. 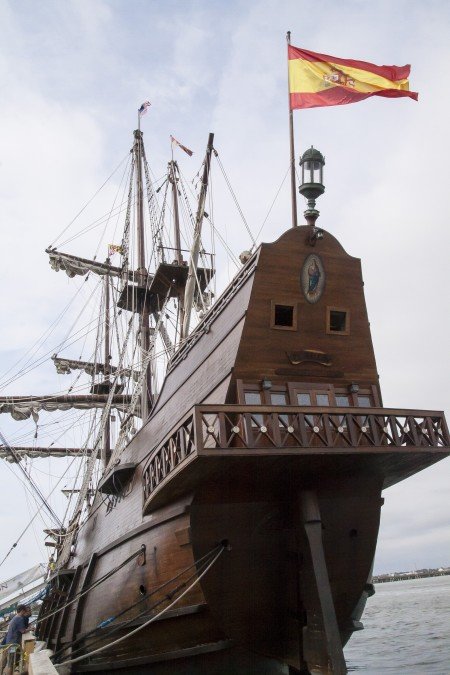 Melanie Pursel, Executive Director of the Greater Ocean City Chamber of Commerce, reported a buzz of excitement among locals and visitors this week. “There has been a lot of excitement and interest. I was there when the ship came in yesterday and everyone was cheering and the crew was waving,” said Pursel, adding “I think people are curious and look forward to taking a tour. I think it is a wonderful event for Ocean City.”

Stepping aboard the ship is like stepping back 500 years in time. The Galleon is an exact replica of the 16th Century ships that Spanish explorers sailed on while discovering much of the world. The vessel is 162-feet long and weighs just over 500 tons. There are six cast iron cannons on each side of the ship, as well as two cast iron anchors with wooden stocks. 18 crew members are needed to sail the ship, with an additional 8 volunteers on board for assisting with the tours.

From the 16th to 18th centuries, galleons played the lead role in commercial and cultural relationships between Spain, America and Asia. Galleons were constructed from oak, pine and various hardwoods, and called for the work of hundreds of expert tradesman, including carpenters, blacksmiths, shipwrights and pitch-melters. Crews would work day and night for months before a galleon was considered seaworthy. Because the ships were costly, they were typically used for trade rather than military use.

The El Galeon Andalucia was constructed in 2008 and is owned by the Nao Victoria Foundation of Spain. The Foundation has extensive experience in the design, construction and maintenance of historical ships. Between 2010 and 2013, the Galleon has traveled over 35,000 nautical miles, traversing the Pacific, Indian and Atlantic Oceans, as well as the Mediterranean Sea, the Red Sea, the Southern China Sea, the Aegean Sea, the Bosporus Strait and the Caribbean Sea. In total, the El Galeon has stopped at 50 ports across the world.

Bryan Lilley is the point person for the Tall Ship Event, and is responsible for its stop in Ocean City along its US tour. Lilley is better known around Ocean City for coordinating the Ocean City Air Show each year. This time around, Lilley set his sights on the water rather than the skies, approaching the town earlier this summer for approval of the ship’s stop in Ocean City. 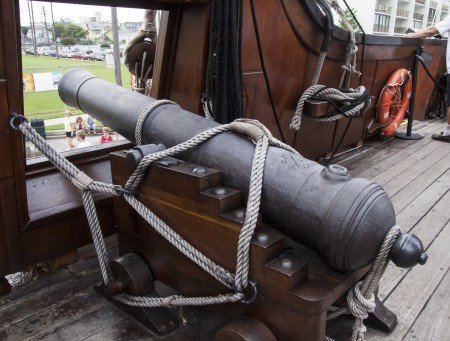 The Galleon traveled from Spain in March to be a part of the 500th anniversary of the state of Florida. While there, the National Air, Sea and Space Foundation – of which Lilley is the chairman – began scheduling other U.S. cities to visit. With a relationship with Ocean City already in place, Lilley contacted the town to set up the event. While the Tall Ship Event was put together fairly quickly and with limited media attention, excitement over the ships arrival has snowballed over the past week. “For a first time event, the excitement is great. The Town of Ocean City has been extremely supportive,” said Bassett, adding that town officials have been reporting local enthusiasm on par with larger events like the White Marlin Open.

“They have done a really nice job with the ship. There’s a lot of historical information on the ship and it’s basically a little museum down there,” said Bassett. A tour around the ship’s decks revealed a number of interesting facts and mini-exhibits, with a collection of information on Spanish exploration and Florida. The middle area of the ship is a replica of the officers’ quarters, with four cabins, two bathrooms and the Admiral’s cabin. Even the furniture has been reproduced to look exactly as it would have in the late 17th and early 18th centuries. A journey below deck yields more hidden gems, including the canons and a video viewing of the ship sailing in action.

Of the crew members, eight are volunteers hailing from Spain. “I knew they were looking for volunteers so I wrote an e-mail to the Foundation website. They wrote back asking if I was interested in coming to the U.S. with the ship and I said yes!” said Jaime Roca de Togores, who is enjoying his first trip to the United States. “That was one of the main points for signing up. So far we’ve been in St. Augustine, and then to New York and now Ocean City.” With just one night in Ocean City under their belts, Roca de Togores and the rest of the crew haven’t had much time to explore the town, but Roca de Togores noted how excited they were to enjoy Ocean City and jump in the ocean. “When I come from Spain, I was looking for places like this. New York is great but this is…this is very different here,” he said, adding that visiting small American towns was much more appealing to him than the larger cities. “This is what it’s about,” he said.

The ship spent a month in New York City before arriving in Ocean City, and according to Bassett, the Galleon will head to Puerto Rico next, where it will stay for two months. Bassett explained that NBC would be filming a show about Black Beard aboard the ship. In the mean time, Ocean City locals and visitors have until September 3rd to enjoy the Galeon Andalucia. 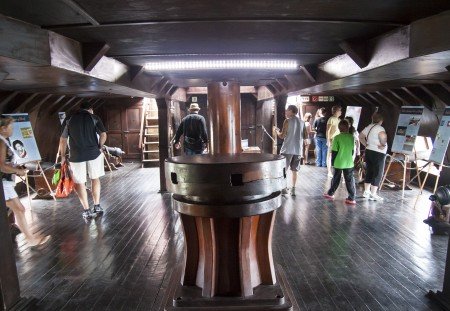