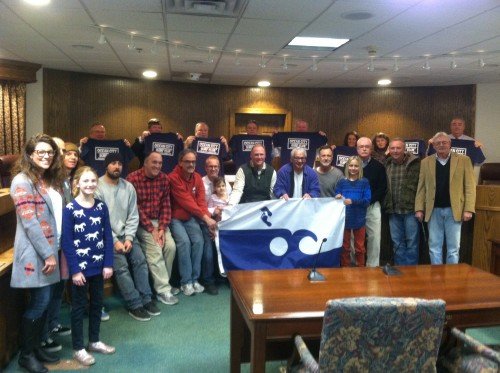 Just like still waters, the Ocean City surf community runs deep. Year-round, rain or shine, if there are waves you can guarantee surfers of all ages will be paddling out in hopes of that one, perfect barrel. But there’s more to our local surf community than just catching waves. Like any other community, there is camaraderie, mentoring and community service, all tenets which have gone into the formation of the Ocean City Surf Club (OCSC).

Executive Director of the Ocean City Chapter of the Surfrider Foundation Shelly Dawson announced earlier this year that he would be stepping down from the position after 14 years of service. His new focus will be heading up the newly formed, or re-formed rather, Ocean City Surf Club. Building on the inspiration of Ocean City surfing pioneers Al, Skill and Carl Johnson – who started the original Surf Club nearly 50 years ago – the new Ocean City Surf club seeks to “celebrate our ocean community, its heritage and future.” The non-profit, beach-centered organization is for more than just surfers, in fact, the Club is open to all ages, visitors and locals, and anyone with an ocean-minded outlook. “Although formed by surfers it is anything but exclusive,” Dawson pointed out, adding “everyone is welcome – resident, visitor, beach lover, fishermen – simply if you love OC, the area, the water, the sports or even just sunsets, this is your club.” While this is not a “locals only” club, the OCSC will be geared towards local efforts.

“Through memberships, fundraisers and donations, we will fund all of our local efforts, which already include several thousand dollars in scholarships in our first months of organization, planned clean-ups and plantings and environmental presentations in local schools,” explained Dawson this week. The OCSC will offer several scholarships this spring to graduating seniors to help with their continuing education. Two scholarships (one male and one female) will be offered under the Bill Wise Memorial with an environmentally focused scholarship to be opened as well. “Our scholarships are based on academics and community service (both a must) and then to varying degrees environmental interest and water-related activities,” said Dawson.

In addition to clean-ups, plantings and scholarships, the OCSC will also be geared towards camaraderie and fun. “We will not be all business and the social aspect of our Australian-based club will not be lost,” said Dawson. “Camaraderie is paramount to the success of our group and we will support our local sponsors with monthly socials.” There will also be several fundraisers throughout the year to raise money for the club. Both fundraisers and socials will be open to the public. This Sunday, April 6th, marks the membership kick-off for the OCSC, to be held at Greene Turtle West from 1pm to 5pm. The event will include food and drink specials, an oyster fest, music, raffle items, and no cover charge. While the event is considered a membership kick-off, the OCSC has received ample support so far. According to Dawson, “the positive response has been overwhelming, but that is not surprising in this generous community.”

So how do you become a member? Simple actually, the membership is only $25 annually, $85 per family. Dawson pointed out that many local businesses have joined and are offering discounts to fellow OCSC members in kind. As a local non-profit, all of the money goes towards the local community. “The Delmarva beaches are special not only because of the unique natural setting, but also because of a generous and optimistic community,” concluded Dawson, adding, “we have been lucky to share in both and hope  to share them with our future.”

Best Of – Getting in Shape for Summer in Ocean City