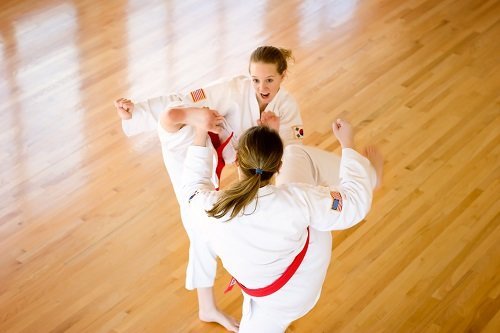 Korean martial arts goes back as fAR as 37BC – 668AD, to the Koguryo dynasty. Fast forward thousands of years and in 1960 Tae Kwon Do was standardized and the martial arts were moved towards a sport. “I have been training in Tae Kwon Do since 1983,” said Kim Heaney, local owner of Chesapeake Martial Arts and “Grand Master”. “It’s been a wonderful journey.” Recently, Heaney achieved the title of Grand Master, which means: a person of the highest competence or achievement in a field. “It’s the 7th degree in black belt, which translates to about 17 years of experience,” said Heaney. The coolest part? Kim is one of just three women in the country to achieve this milestone.

“I got involved in karate from friends,” said Heaney. “I just completely fell in love with it, it was such a great outlet for me, and then I just took the ball and ran with it.” Chesapeake Martial Arts, owned by Heaney and her husband, started in Baltimore where they ran the studio over the bridge for 16 years, until deciding to open another location down at the beach. Pretty quickly, the running to and from the Eastern Shore got old and they decided to permanently relocate to Ocean City. The couple celebrated their 9th year of Chesapeake Martial Arts in November! The organization holds classes for people of all ages, ranging from 4 to 60 years and older. Chesapeake Martial Arts holds tons of programs that cater to everyone who is interested in learning more about TKD. They offer introductory programs, children’s, adult, personal training, weapons class, a tournament team class and seminars/demos. In addition, they even offer women’s self-defense classes and they offer summer camp and after school programs for children of all ages as well.

And Master Heaney isn’t stopping there… she’s already focused on her next goal. “I’m already working towards my 8th degree,” she said. “I just want to continue to teach and train, my dream is to eventually train in Korea, since that’s where it originated from.” It will take her 7 to 8 years of continued training to reach the next degree, which would be Chief Master… we have no doubt she will succeed with flying colors. An-nyong-hi Ga-se-yo (Korean for goodbye!)