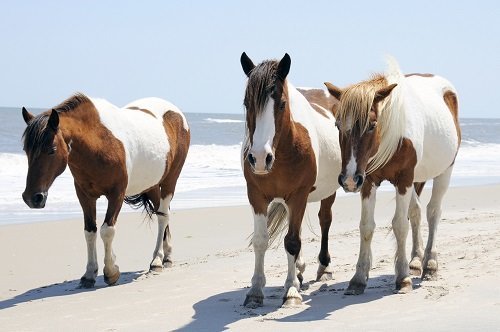 As sad as we are to see Berlin relinquish the crown for America’s Coolest Small Town, we are thrilled to see another Eastern Shore town in the running…Chincoteague, Virginia! Of course we have immediately set our sights on helping our favorite island town win, and with a current 2nd place standing, we’re feeling confident Chincoteague can pull into the lead over the next month of voting. To get the ball rolling, we decided to draft our own list of the ‘top ten reasons Chincoteague should be America’s Coolest Small Town.’ There’s more than ten of course, but ten seems to fit the bill for these types of round-ups so here we go:

This is an obvious one, as Chincoteague is already famous for their wild ponies. Wild ponies have inhabited Assateague Island for hundreds of years. The ponies wander the beaches, the marsh and the islands, eating dune and marsh grasses and drinking fresh water from the ponds. Each year, the Chincoteague Volunteer Fire Company purchases a grazing permit from the National Fish & Wildlife Company, allowing them to bring a herd of 150 ponies from Assateague Island to Chincoteague Island. The swim, now in its 90th year, brings thousands of spectators to the tiny island each year to watch the pony penning.

A beloved classic, Misty of Chincoteague was written in 1947 by Marguerite Henry about a real, wild Chincoteague pony named Misty. The book won the Newbery Honor, and in 1961 a film adaptation was released. The real life Misty was foaled in domesticity in Chincoteague at the Beebe Ranch in 1946. Today, there are roughly 80 known surviving descendants of Misty, along with thousands of children who have treasured her story.

Another given. Chincoteague is home to roughly 4,600 residents, and while thousands more visit the island each year, the small town pride runs deep here. Local support is strong, neighborhood charm is abundant, and the traditions hold true year after year. America’s Coolest Small Town is about more than just events or landmarks, it’s about the feeling the town evokes when you walk the streets. Chincoteague is that town.

One of our favorite things about Chincoteague is the natural beauty of the island. The Chincoteague National Wildlife Refuge includes over 14,000 acres of beach, dunes, marsh and maritime forest. What’s more, it’s one of the most visited refuges in the United States. Explore and learn about the local wildlife and wildlands. Assateague Island National Seashore is divided between Maryland and Virginia; the barrier island lies to the east of Chincoteague, protecting it from the Atlantic Ocean and providing miles of pristine beaches to enjoy. The entire island is a sanctuary and provides endless opportunities for exploring and outdoor activities for nearby residents and visitors to Chincoteague.

Now in its 28th year, the Chincoteague Blueberry Festival is a mid-summer celebration that draws thousands to the tiny island. Of course, blueberries are the main focus of the event, along with Sugarbakers famous blueberry pie and the Island Creamery’s blueberry ice cream. Blueberry muffins, pudding, crisp, shortcake and jams round out the culinary portion of the event…there’s even blueberry soup! The festival also serves as the largest fine arts and crafts event on the Eastern Shore of Virginia with exhibitors traveling from 12 states to attend.

If you’ve never had a Chincoteague oyster, than you are most certainly missing out! We’ve spotted them on menus in some of the best oyster houses in NYC, but it’s even better when you can enjoy them on their home turf. The oyster festival will celebrate its 43rd year this October, so mark your calendars because this event typically sells out in late September. Enjoy oysters just about any way you like them – on the half shell, steamed, fried, fritters – along with a plethora of other tasty treats. It’s an island tradition you don’t want to miss.

One of our favorite things about Christmas on the Eastern Shore of MD, DE and VA are the small town holiday parades. Chincoteague is a top favorite, with their old-fashioned parade. It’s a must-see event, as the entire town turns out, along with area visitors, to celebrate the holiday season. It’s small town charm at its finest.

When we think of Chincoteague Island, we immediately think of the abundance of outdoor activities to partake in. From taking a leisurely walk through town, to the nature trails and boat tours, there is no end to the outdoor fun in Chincoteague. Surf fishing, swimming, and exploring the beaches are perfect for summertime adventures. Explore the wildlife along the refuge and Assateague, visit the 142-foot Assateague Lighthouse, or schedule a pony watching tour. Kayaking, boating, hiking, surfing, fishing…the options are endless.

Not many small towns have bragging rights to spectacular views of NASA rocket launches, but Chincoteague sure does! Wallops Island Flight Facility, located on nearby Wallops Island, Virginia, schedules at least 8 missions each year. Chincoteague is the ideal spot for viewing the launches, and is home to many perfect locations for setting up with your family for the event. Or visit the NASA Visitor’s Center, located along Route 175 on the way to Chincoteague.

If you aren’t convinced by now, we suggest you take a trip to Chincoteague and discover for yourself why the island town should be voted America’s Coolest Small Town! And don’t forget, to vote, vote, vote!