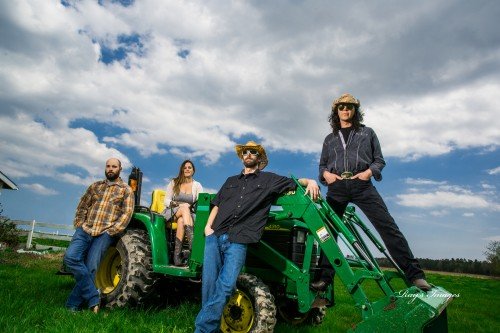 As a resort town, Ocean City certainly isn’t short on live music. On any given night there is an eclectic mix of tunes floating out of the local watering holes, from bluegrass to punk to rock to reggae. Yet despite our musical musings here on the Shore, and despite the predominance of country music lovers, Ocean City has been notably devoid of a solid, country music band. That is until Haleytown hit the stage last year. We sat down with husband and wife duo and Haleytown lead singers Blake and Daniele Haley this week, to discuss everything from their eponymous band to balancing the dynamic between being “just a little bit country and a little bit rock n’ roll.” With an busy spring/summer schedule across Delmarva, there’s no better time than now to get to know Haleytown.

So, who is Haleytown you ask? Just another cover band? Anyone that’s ever been to one of their shows knows that Haleytown is so much more than the regurgitation of a few trite and tired country hits. The five-man band gets your toe tapping (even if you do profess an undying disdain for country music) and keeps your heart pumping with the on-stage antics of front man Blake Haley, who has been known to climb on top of amps and hop around like a mad man while furiously singing and playing guitar. You most likely know Blake from around town, as he has been performing as a local musician for years. Originally from Mississippi, Blake played with Pirate Radio a few years back before launching his solo act. Over the years his uber-talented wife Daniele (seriously, she beat Blake out for the title of Ocean Idol in 2010) would take to the mic, joining Blake for a few acoustic sets here and there. Up next, bass guitarist Kasey Briggs, whose musical resume is chocked-full of diversity, including his surf-punk rock band The Phantom Limbs. Last but certainly not least – as you can’t attend a Haleytown show without noticing, or hearing, him pounding on the drums – is Skip Dixon. Skip is no stranger to the music life here in Ocean City. Between his DJ gigs, morning radio show (Big Dawg Fun) on 107.7, and his KISS cover band, we can guarantee you’ve probably seen Skip around town. In fact, according to Daniele and Blake, Skip is the driving force behind the band.

“Skip is the one who originally approached me about putting together a country music band,” explained Blake, who was hesitant at first to be a part of a band again. After some further promptings from Skip, Blake decided to get on board with the idea, conceding to Skip’s point that the niche for country music was noticeably lacking in Ocean City. “Being a really smart guy, Skip saw the need around here and decided to fill it,” said Blake. “Skip noticed that there was a lack of country bands in the area despite the fact that country music is so popular here,” added Daniele. Finding a female vocalist was a no-brainer as Blake was dating Daniele at the time and knew just how powerful her vocals were …not to mention the built-in onstage chemistry. Kasey was quickly brought on board and Haleytown was born.

Since forming a little over a year and a half ago the band has played all over Delmarva, from their original Ocean City stomping grounds, The Pour House, to Oasis Bar and Grill in Whaleyville, to the Nascar campgrounds at Dover Downs. The latter was perhaps their most ingenious show. Skip pushed the band to perform at the Dover Downs campgrounds last summer, despite not being booked for the gig. After setting up in the Lot 10 party lot, the band passed out flyers before setting up shop and playing for fellow campers. The response was overwhelming said Daniele, adding “that was probably the biggest crowd we’ve played to.”

While most of the songs currently being played by Haleytown are covers, more original songs are in the works. “Right now we have two originals but the goal is to keep adding as many originals as we can,” said Blake. As for song selection, “Skip is really instrumental in that,” explained Daniele. “Because he is a DJ and a country music radio host, he knows what’s being requested. He has his finger on the pulse of the country music community.”

“In our conversations though, we all try and throw out ideas for new songs,” added Blake. The diversity of the band members’ musical backgrounds has organically lent itself to a wide-ranging sound. “You’re essentially going to hear what you hear on the radio today, but with a little bit more of a rock influence,” explained Daniele. “But you’ll also hear a few songs that will take you back,” added Blake.

On the horizon for Haleytown is a burgeoning spring and summer schedule, with events slated for The Pour House, Oasis Bar & Grill, Plim Plaza, and The Angler, to name a few. Still need more? Head over to the Haleytown Facebook and Instagram pages or check out their website at www.haleytown.com. 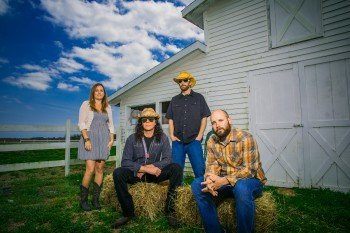 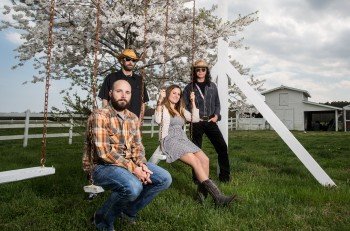 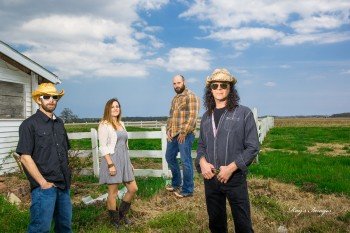