This past weekend was my absolute favorite weekend of the year and my favorite Delmarva event. To me, it was Christmas, New Years Eve, Mardi Gras, Fourth of July, Superbowl and my birthday all rolled into one. Although Superbowl is really the only one of those events that I actually celebrate, I wanted to give a perspective of its’ importance to me based on the average person. It was the gloriously gluttonous gathering in Salisbury known as Pork in the Park. I’ve had my calendar marked since the day they announced the dates. As pathetic as it may sound, if a family member were getting married on this weekend, I would be on the fence as to which event to attend and seriously consider how close that family member was to me.

I, my wife, and our oldest daughter have not missed one for seven consecutive years now, and I don’t anticipate skipping any in the foreseeable future…regardless of how frowned upon that is by some of my doctors. We are some of the very few people who can say that who are not only still living, but also not on Lipitor.

I like to think of myself as Shorebread Magazine’s unofficial Pork in the Park correspondent. Though I have no official title nor expense account to attend the event, I feel like kind of a local ambassador to the hog festival and all it has to offer. I’ve now thrice attended the event with a very pregnant bride, and thrice attended with a child under a year old.

It is a really fun family event though its’ primary following seems to be those who are morbidly obese, or decked out in full biker regalia, or clad from head to toe in camouflage (the latter are difficult to spot however.) So it would seem on the surface that a middle-aged man with a lovely petite wife and three beautiful little girls in tow pushing a stroller with a baby boy would be somewhat out of place. But I’ve never been more comfortable in a group setting than I am there. Despite how much fun we have every year, I take the event seriously. And if you know me at all, or have read any of my stuff, there are very few things in life that I do take seriously. I count down the days to the event and lose sleep the night before like a child on Christmas Eve. This annual celebration of the pig makes Winterplace Park my Mecca (pun intended. You’ll get that one later, don’t over think it).

We traditionally go on Sunday, the final day of the event, and as a seasoned pork loving veteran I’ve learned some tricks along the way. Like going camping or fishing with someone who partakes in those activities regularly, I come equipped with the things that most people wouldn’t have thought of. I wake up early on the morning of our family sojourn to Salisbury in a great mood, which is already out of character for me. I dress accordingly with the tedious attention to detail of a knight of the roundtable suiting up in his armor for battle. Years of trial and error have lead to my tenuous preparation. Given the traditional demographic drawn to this field feast, it’s the last place in the world where I concern myself with making a fashion statement, so I dress accordingly and for strict practicality.

I learned early on not to wear flip flops in case the weather has been unfavorable for the first two days of the event. By Sunday, it’s often pretty swampy so I opt for canvas shoes that can be washed later and thick socks. Next, depending on the temperature, I adorn my lower regions in either cargo pants or cargo shorts. Wherever possible going up a full waste size from how I started the day. I don’t now, nor have I ever viewed cargo pants or shorts as fashionable, but on this day I need all the pocket space I can muster. I stuff said pockets with all of the necessary supplies. Since we always go on the last day of the event, I’ve learned that many of the vendors are running low on napkins or paper towels by the time we graze through the maze of porcine deliciousness. So one pocket is stuffed with a large stack of napkins I bring from home. Another pocket contains baby wipes and a small bottle of hand sanitizer because quite frankly, I’d rather wash my hands in the fish pond there than the makeshift hygiene kiosks adjacent to the row of port-a-potties. Another pocket contains Tums for obvious reasons. Another pocket houses cash because I don’t believe any of the vendors take credit cards and I would prefer not to use mine even if they did. Plus this way, I can tip well in case one of the stands is delicious enough to warrant a second visit perhaps they’ll remember my face and generosity. There’s really no such thing as too large a rack of ribs, or too heaping a brisket sandwich. It’s worth a shot. I stow my wallet and keys in the diaper bag in the bottom of the stroller so as not to lose them. This may be the one place I ever go where it might actually be prudent for some of the attendees to want to steal my identity because it’s more beneficial than their own. In another pocket is my phone. Not because I anticipate making or receiving any calls, but simply so I have a camera for photo ops of my children. Toddlers still get excited about having their picture taken with someone in a pig costume. What the hell, it’s way more affordable than taking them where they can pose with Mickey Mouse. I wear an oversized belt which will more than likely be loosened throughout the course of the day. My rapidly swelling top half is draped in a tee shirt, covered by a sweatshirt that can be removed in case it gets really hot out, or I start to get the food sweats, or I have a ‘MANopause’ episode. Both layers are dark in color to hide grease, BBQ sauce, and drool. My last remaining pocket space is home to my epi-pen. This being an early springtime event, bees are often a factor, and they are seeking sweet tasting sauce covered victims. You may recall that I learned the hard way that I am deathly allergic to bee stings. Though I guess there’s no good way to obtain that information. And I’m not about to end my favorite day of the year with anaphylaxis.

Speaking of proper attire for the event, on to my children. If you happened to have been there this year and noticed a family of six in which the two youngest daughters were adorned in Disney Princess dresses, that was my family and I’ll tell you why. Reason number one; because they wanted to wear them. Reason number two; cause why not?! And reason number three; because they were very bright colors and no one else there would be wearing them. These are the pair of my spawn who are most likely to take off running through the large crowd, and it’s so much easier to spot Snow White from 40 yards away than it is a kid in a neutral colored sweat suit. There’s a method to my madness.

Last year, for reasons I’m still pondering, the event was only on Friday and Saturday which means we had to adjust our annual gorging schedule. This was a nightmare! After pigging out (again, pun intended) all day, I had to rush home, quickly shower and go to work behind a bar all night until close. I spent my entire shift feeling like that guy who went to a pro football game on a sub freezing day in December with a stomach virus and now found himself standing about 40 deep in line for the toilet at half time. I waddled around all night like a woman in her ninth month of pregnancy, and had a look on my face like I had just witnessed a boil being lanced.

This year, thankfully, they went back to having it on Sunday. So I went back to my traditional ritual. Although the oinker is the headline act at this festival, I consumed no less than seven different varieties of farm animal. After which I went home, unbuttoned my pants, and buckled up in fetal position on my living room floor where I cried and trembled with a grin from ear to ear until I drifted into a barnyard buffet induced coma for a few hours. It was one of the greatest days of my life.

Thanks for playing along. Until next week, Syd Nichols 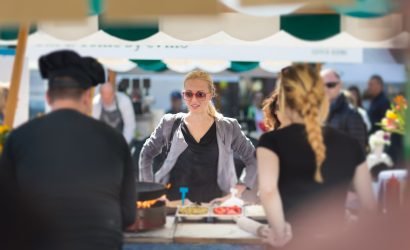 Pork in the Park Returns to Winterplace Park

Local Happenings: May Events Across Delmarva