No your eyes are not playing tricks on you…that IS a giant beach ball you see in the Ocean City skyline! Designers put the finishing touches on the highly anticipated “beach ball water tower” in downtown Ocean City over the weekend. The brand new tower, which has been under constructions since June of 2015, will replace two aging towers in the area and brighten up the view in the process.

The new landmark is slated for completion in November and will hold one million gallons of water. It is expected to enhance fire flow, improve water quality and reduce maintenance costs. When completed, the structure will allow city officials to remove the existing towers on both Worcester Street and 15th Street.

Now that the paint job is complete, Ocean City’s public works team will continue to work with Chicago Bridge & Iron (CB&I) subcontractors to finish the site work, including fencing, landscaping and tank sterilization before putting the tank into service.

The brightly colored beach ball is sure to become a favorite of visitors and locals alike! And has already added some memorable charm to one’s travels into downtown Ocean City! 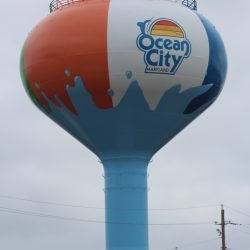 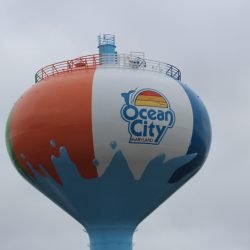 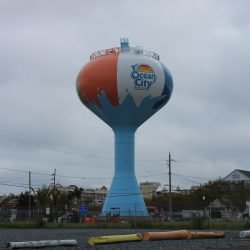 Apple Picking On The Eastern Shore