It was very fitting that this weekend we took a trip to Annapolis, after all it is Presidents Day weekend.  I’ve been to downtown Annapolis countless times. I’ve done the state house tour when I was school aged, although my memory retention from those trip was never very good.  I still appreciate the history of the state capital, as well as the architecture.  The brick sidewalks that are delightfully imperfect undulating under the growth of old trees.

The bricks of Annapolis remind me of the Humphrey’s House,  the connection between the history of this house and the history of our state.  I know that when we have guests my favorite thing to do is take them up to the attic to see not only the fine craftsmanship and quality of the construction, but there is also a time capsule in the form of an old electric panel with pencil written notes from as far back as 1917.  It is amazing to see it as if it was written just last week.
This weekend we were fortunate enough to have a brief private tour of the State House.  This time I paid a little more attention.  It was easier to hear the story of George Washington retiring as the Commander and chief of the Army from a friend who is in Maryland politics and can trace his lineage back to his ancestors that were members of the gallery the day that Washington turned over his sword.
The coolest part of the trip was when our guide did the same thing that I do when guests come over – he took us to the attic.  It is only with special permission from the Governors office that you are allowed to walk up in the dome of the State House.  To my delight, you can see the scribbling  on the beams of the workers that built the state house.  Added over two hundred years are the names of workers and visitors since.  I think we might need to start the tradition of guests signing the walls of the attic so that they can be discovered in another 100 years.
Happy Presidents Day! 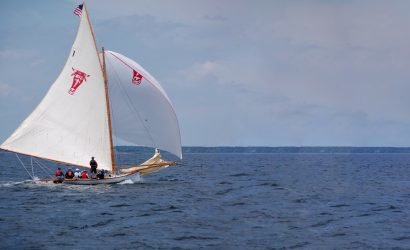 Elf Classic Yacht Race Returns to the Chesapeake May 13th