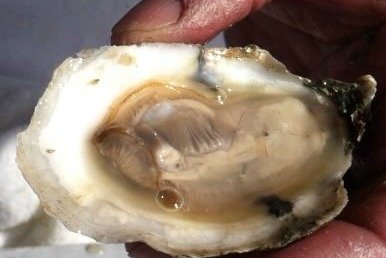 Billy Taylor knows more about the rich history of Berlin, MD than just about anyone. Many of his stories are first hand accounts. Like the time he watched as President Franklin Delano Roosevelt came to town in 1939. Or a few years later in 1943 when the government shipped 125 German POW’s to Berlin to work in the surrounding farms. Taylor has had many memorable experiences throughout his 80 years—(although to meet him, he doesn’t look a day over 65). Aside from his vast wealth of historical knowledge, Taylor also knows plenty about oysters, clams, and anything else that can be harvested or caught in the waters of the Eastern Shore.

Billy Taylor and wife Ginger are the proprietors of R-DAD Ocean Grown Clams and Oysters. Named after their five grandchildren—Rachel, Douglas, Alexis, and Dalton, who all love to eat their grandparent’s products—R-DAD has been in business for two years and is a venture the couple started when they were supposedly “retired.” But it’s been on Billy’s mind for a long time. He’s been on the water in one capacity or another—fishing, clamming, crabbing, tonging for oysters—for 70 years.

The Taylors set up weekly at area farmer’s markets to sell their oysters, clams, lump crab meat, jumbo lump crab meat, and scallops. Tuesdays they are in Salisbury at the Asbury Church, Wednesdays and Fridays at the Berlin market. This endeavor makes for long days, 7 – 10 hours between setup and take down. But the hard work is worth it to bring top quality, locally grown seafood to locals and visitors.

“You put the time in, people get to know you, know your product, and trust you,” says Billy.

In speaking of the oysters, Billy explains why their quality is so superior,

“These are gourmet oysters. You see how they are very deep [indicating a shape similar to a ladle]? They have lots of meat.”

The habitat the oysters are grown in has everything to do with their quality. R-DAD oysters come from Hog Neck Bay between Wallops Island and Cape Charles, VA. They are farmed oysters, grown by H.M. Terry Co. who supplies 2 to 3 million oysters per week to various vendors. According to Billy, these oysters are why the waters in that part of Virginia are so clear.

“They feed on the algae in the water. When they feed during high tide twice a day their shells open and their tentacles come out, looking like a woman’s hair,” describes Billy.

The oysters effectively filter the water, making it clear. What’s in the water to begin with also has a lot to do with the taste of the oysters. R-DAD’s are deliciously salty, meaty, and fresh. Their flavor attributed to the environmentally friendly Virginia waters, according to Billy.

“There’s not a sewer plant or commercial plant within 45 miles of where these oysters are grown.”

Aside from their wildly popular oysters, the Taylors also sell a lot of clams. They range in size, with the pasta clam being the smallest size permissible to be sold in the U.S., at a little bigger than a thumbnail. These clams are four months old. The sizes then increase to the little neck, the middle neck, and the top neck. Four months in age separates each size. Figure if you are eating a top neck clam, it’s been grown in ocean waters for a year.  The middle necks are the most popular size. Top necks are used most frequently for Clams Casino.

Commercial clamming on the Eastern Shore is a big process. As Billy explains,

“It takes three boats and they’ll be at it for five to six hours. One boat holds the pumps that pump the clams up. The other boats will each hold 85,000 clams.”

R-DAD’s other products are also locally grown and harvested. The scallops come from off the coast of Ocean City, MD and the crabmeat is all picked from crabs found in the Chesapeake Bay. It’s all local and it’s all as fresh as can be. There’s no question as to where this food comes from—right here on the Eastern Shore.

This late-in-life venture for the Taylor’s is certainly hard work, but work that’s worthwhile. Returning customers and out-of-town visitors who may purchase as much as many as 300 clams to take back home, often to Pennsylvania in their coolers full of ice, can attest to the taste and quality of R-DAD’s products.

“I found out the secret is to work. You got to get up and get those bones moving everyday. You change throughout your lifetime, at least every twenty years or so. You’ve got to change and do something different.”

The secret to success and longevity—it’s that simple.

Ginger Taylor is the family chef. She shares some of her favorite ways to prepare R-DAD products.

Drain the oysters, mix into the batter and fry in hot Crisco. Tip: Don’t let the oil get too hot and smoke.

Chop them up into &frac14; inch pieces and mix into the batter recipe above (sans the oysters, of course.) Fry them up the same way and you have clam fritters.

The Taylor’s often supply seafood for auxiliaries and fire departments. If you are planning a large party, here is how to gauge how much seafood is needed for 200 people:

Scroll through the gallery below to see how Billy Taylor properly shucks an oyster.