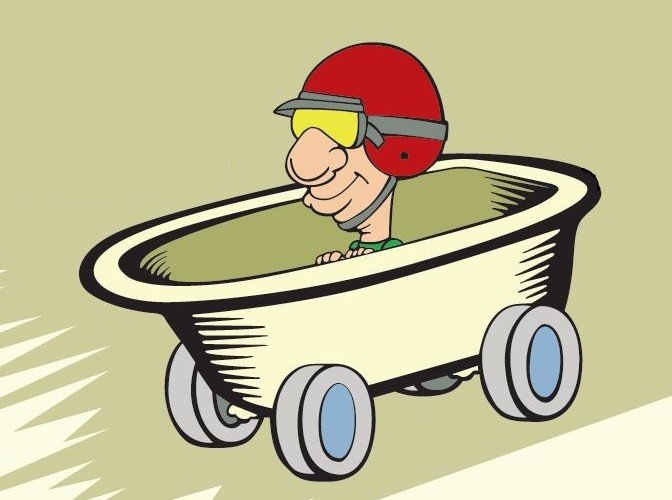 A production crew has recently, privately, released some information about their latest creation to be raced on Friday, July 13th, 2012 in the historic town of Berlin, MD. An official spokesperson of the race team said that the team planned on meeting tonight to put some finishing touches on their bathtub – which now had 3-and-a-half foot handlebars. No other details were permitted for release.

A bathtub with almost 4-foot handlebars? Don’t question it. You read correctly. Adults in Berlin, MD will be racing down Main Street in custom-created carts made of transformed bathtubs.

The competitive event is open to anyone who would like to enter. Area businesses are encouraged to participate. Businesses may use their vehicles to advertise. Past champions include last year’s winners, Ayres Creek Adventures/Baked Dessert Café & Gallery, Peninsula Bank, Sassafras Station, Barrett Chevrolet, Bath Fitter, and the Berlin Shoe Box.

New for this year is double-elimination bracketing, a rumored race track barrier consisting of straw bales, and a brake requirement on all racing tubs. Other rules for the event are as follows:

All entrants must be 16 years of age or older, and have a signed parental consent form if under 18 years of age, and sign a rather serious liability waiver. Entrants must sign the waiver that states,

The Chamber of Commerce has upped the ante this year by giving more to the winning tub. Besides the illustrious “Winner Takes All” trophy and year-long bragging rights, the first place winner will receive a free advertisement on the Chamber’s website as well as recognition in town email blasts and press.

After doing some history on the origin of bathtub races, it seems as though the idea of someone racing in a speeding bathtub originated in Canada. More than 46 years ago folks at the Nanaimo’s Marine Festival raced bathtubs turned into watercrafts over the harbor in Nanaimo. This event has occurred every year since. Although Berlinians don't race tubs in a large body of water, the citizens of the historic town and surrounding areas have just as much fun on Main Street as these Canadians do during their race. Many other land-races in bathtubs occur across the country during small-town festivals every year.

Some local businesses that we’ve heard are creating racing tubs? The Globe, Jeffrey Auxer Glass, Worcester County Tourism, Ayers Creek, Baked Dessert Café, Bath Fitter, D3Corp, Ocean 98.1, Burley Oak Brewery, and several others. Besides the spokesperson who leaked the secret about a bathtub with 4-foot handle bars, other tubs have been rumored to include swanky items like a chrome grill, helmets that look like cupcakes, beer taps, bull horns, air horns, and metallic flake paint.

A Rubber Ducky 50/50 contest, Zumba half-time show, and tub-parade are scheduled to take place during 2nd Friday Art Stroll, also. There is still time to register if you haven’t already. Contact the Berlin Chamber of Commerce at 410-641-4775 to claim your spot in the race. Pick your pit crew, drive, and pusher, and start building – just don’t copy those 4-foot handlebars!

Photos in the gallery below were taken during the 2011 Bathtub Races. More photos from last year visible on Good Clean Fun Life. 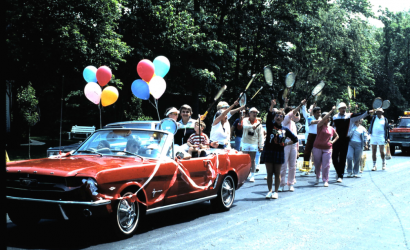 A Lucky Girl’s Life: Food and Herbs to Boost Your Metabolism