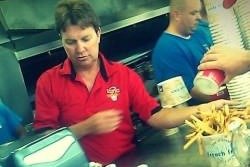 The sights, sounds, and smells are unmistakeable: children’s laughter alternating with screams emitting from the roller coaster and pier rides, the crashing waves just a short distance away, and the aromas that have been seaside staples for close to 100 years. These elements have had a hand in making the Ocean City, MD Boardwalk the landmark it’s become since its creation in 1902.

Nearly every visitor who makes an annual pilgrimage to the seaside resort has to make at least one stop at the famous boardwalk. Perhaps it’s for the rides, the haunted house that can cause moments of delightful terror, the oddities at Ripley’s Believe It Or Not, a bit of history at the Ocean City Life-Saving Station Museum, or simply the chance to bike down the boards with the wind and salty ocean air behind your back. Or maybe it’s the food: salt water taffy, chocolates, popcorn, chili dogs, snow cones, or the most famous treat of all,Thrasher’s French Fries.

The venerable boardwalk establishment combines just four simple ingredients: potatoes, peanut oil, apple cider vinegar, and salt into a treat that has practically come to be as representative of the boardwalk, as the boardwalk itself. The two are nearly synonymous with one another. Thrasher’s may well be your favorite treat, but do you know the history behind the Ocean City Boardwalk’s favorite fry, or who keeps a watchful eye over the legendary stand, ensuring that it’s much the same as it was over 80 years ago? Read on, and find out.

There’s a man who holds court in a small white stand on the Ocean City boardwalk, nearly every day, while the weather is nice.  He oversees your vacation, watches your children’s eager faces, and hands out the boardwalk’s most coveted food.  He makes sure that the famous potatoes uphold the integrity of the original recipe started in 1929.  He is Les Morris, commonly known amongst his co-workers, as “Lord of the Fries” at the infamous boardwalk staple, Thrasher’s Fries.

Les doesn’t own Thrasher’s. That distinction belongs to Buddy Jenkins and the Boardwalk Hotel Group.  But, it’s a safe bet that Les knows his way around a French fry better than anybody. He’s worked there for 34 years. When asked about the often copied, but never quite duplicated flavor of Thrasher’s, and its distinction of only serving salt and vinegar as toppings, Les says simply,

In this day and age when next best thing often means the constant evolution of products and services, it’s refreshing to hear Les’s comment, communicated in a way that needs no further explanation. Some things are simply better when left untouched.

According to the recorded history of Thrasher’s, the salt and vinegar toppings harken back to the old English ways of dressing potatoes.  That fact, and the peanut oil Thrasher’s uses to fry the tasty spuds is all we will ever truly know about the “secret recipe,” started in 1929 by Mr. J.T. Thrasher, the original “Lord of the Fries.”

Mr. Thrasher was a Georgian who introduced a unique concept to the Ocean City Boardwalk, a food stand specializing in only one item (the French fry), unheard of at the time. Thrasher was by all accounts a perfectionist, who brought in potatoes from various regions, at different times of year to ensure the same high quality and taste. To run the stand, he employed a group of girls from a Christian School in Georgia, and housed them in a dormitory above the present-day Bank of Ocean City.

The original Thrasher’s was located just a few steps down from its current location, in the breezeway of the Ocean City Amusement Pier.  When forced to sell his beloved French fry stand due to failing health, Mr. Thrasher sold it to local entrepreneur Franklin “Chip” Hastings, who moved the stand to it’s present location. In 1974, Buddy Jenkins purchased Thrasher’s, and 34 years later he remains the third owner of the little stand that made French fries ubiquitous with the seashore.

In modern times, it seems there’s something to be said for the wisdom of the ages, and the old ways of doing things. Simple food stands specializing in one item are popping up all over the country. More doesn’t always mean better, sometimes it simply means, well…more. Mr. Thrasher’s initial concept was mixed with skepticism, but the success of the business is the testament to his vision.  Perhaps if you do one thing, and do it well, it never really gets old. Just ask Les Morris, who says,

“I eat those fries every day, and have for 34 years. And I never get sick of them, some days that’s all I eat.”

Currently, there are three Thrasher’s boardwalk locations: the original, another at 2nd street, a third at 8th St., and a fourth location in Bethany Beach. Through five generations and 80 years, and two owners who pledged to uphold the traditional recipe of Mr. Thrasher himself, trust that when you purchase a cup or bucket of fries at Thrasher’s, you are tasting a potato exactly as it was cooked in 1929, and that’s something!