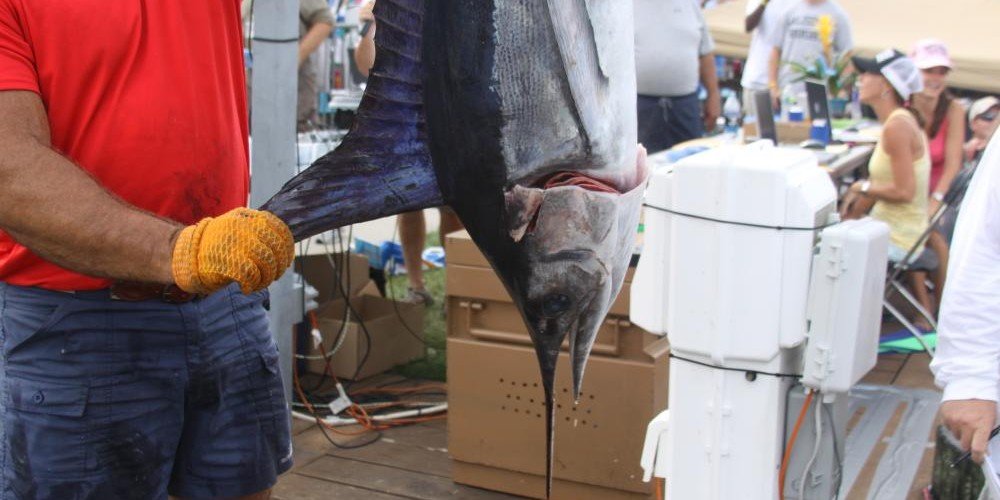 The first time I ate sushi, or more correctly, sashimi was during the White Marlin Open when I was 20. I had happened onto a boat, the owner was a friend of friend—as those random encounters involving yachts tend to go—visiting from Florida. Following directions to the boat’s placement, I was struck dumb by the sea of white bobbing in the marina—it didn’t seem possible that all of these vessels had converged in this one spot.

The sashimi was tuna, fresh caught and so pink it was nearly red. Described to me as “Ahi” my naïveté clearly showed as that word in no way indicated my hosts wished me to eat raw tuna. But I did. It was like nothing to ever hit my taste buds before—devoid of all spices, sauces, or additives, it was pure unadulterated food. And it seemed to melt away, disappearing pleasingly, almost before I could fully comprehend what I had just eaten.

At the time I was working in Ocean City, MD for the summer during college, hailing from Western Pennsylvania, land of the Steelers, winters made for sled riding, and for me, dreams of moving to a warmer climate. Summers vacations spent in Ocean City as a child had all of the ideal elements: sand, waves, rides, beach food, and falling asleep to the sounds of the surf. I loved this land by the sea since I was a tiny girl, but it wasn’t until I lived here that I began to genuinely appreciate the lifestyle.

They say that to truly speak a language or understand a culture, it’s best to immerse one’s self in it. That day all those years ago when I came from a place where sandwiches were often covered in fries, eating raw fish was my first taste of immersion, my first time to shun what I knew and dive in headfirst. Now, it goes without saying that spending time on yachts isn’t quintessential Eastern Shore, but commercial fishing and sport fishing certainly are. From the early days of the pound boats to the massive industry of commercial fishing and reign of sport fishing, the history and continued livelihood and sport make up a vast portion of the culture of this area.

If you’ve ever visited the commercial fishing harbor in West Ocean City and watched as the fishermen packed out their boats, then bellied up to the bar for a cold one, spinning yarns about their latest trip to sea, you know a bit about what I mean. If you’ve ever visited for what locals refer to as “Marlin Week,” you’ve felt the tangible energy that flows when this life by the water is truly celebrated.

Ocean City, MD has been known as the White Marlin Capitol of the World since July 29, 1939 when 171 White Marlin were caught at Jack Spot, an infamous fishing spot 22 miles off the coast. Years later, a young man who once came to Ocean City, MD also as a 20-year-old college student, found his way onto a boat—working as a mate, and a few years later dreamed up the idea for a large billfish tournament. In 1974 the first White Marlin Open was held.

His name was Jim Motsko and he is still at the helm of the tournament today.

In that first year 54 boats were vying for the total prize money of $20,000. In comparison, the leading White Marlin for August 8, 2012 is 72.0 pounds and stands to win an estimated $900,000. There are a total of 253 boats fishing this year, the estimated total payout is over $2.3 million, and the White Marlin Open is now the biggest billfish tournament in the world.

I’ve lived here fulltime for over a decade now, and have had plenty of conversations with people who inquire, in so many words, about the culture of the area. They wonder about where the big museums or concert venues are, or how it is to live in a place where the hometown team doesn’t really exist. (Although we’ve got plenty of Ravens, Steelers, and Redskins fans, it’s not as though their respective stadiums reside on the Eastern Shore.) I know what they are getting at. It’s the idea that sports teams and the arts create camaraderie, a mutual respect and a sense of shared pride. Activities provide real-life experience where these emotions are celebrated. To anyone who questions such things, I invite you to visit the White Marlin Open.

The White Marlin Open weigh-ins, the spectator portion of the tournament, take place at Harbor Island, a waterfront community of townhouses off of 14th Street that opens itself up to the masses once a year. There’s nothing quite like the crowds of people standing by the scales, just waiting for a boat to pull up, the excitement palpable. It’s a festive atmosphere full of music and food of course, and people of all ages. Hundreds of boats are docked in the marina just watching it all unfold. And if you happen to be lucky enough to be in attendance when a boat pulls up with what could be the big winner, it’s the energy equivalent of a group of fans yelling at the TV as the clock is about to run out and a Hail Mary pass has just been thrown.

It’s Ocean City’s version of the Big Game, and it’s happening right now. Immerse yourself in the lifestyle of this part of the shore; join in the celebration. And if you aren’t able to find a boat to eat fresh-caught sashimi on, the tuna sandwich at the Reel Inn is delicious.

Shore Fashion Represents: What’s on Trend at Billabong and the Sample Sale