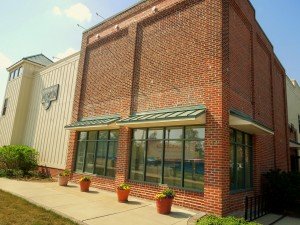 During the late nineteenth century, businesses and residents of Rehoboth Beach, DE began using ice to preserve perishable foods and to cool drinks. Ice was cut from Silver Lake during the winter months and stored in small, wooden buildings that were heavily insulated with sawdust. This supply of ice would usually be available from May through October.

Later, ice was shipped into the city by railroad. Records show that in 1909 there were 15 small ice houses in Delaware. John A. Lingo constructed the first ice house in Rehoboth, at 511 Rehoboth Avenue, in 1912. Currently, the Rehoboth Beach Museum, home to the Rehoboth Beach Historical Society, resides at the very location that the ice house once occupied.

Lingo used the ice to preserve meat, dairy products, and other perishables in his market. The market was located at the intersection of Baltimore Avenue and First Street in Rehoboth. Lingo would individually deliver ice to customers around town on a regular basis.

Through the years, the wooden building fell subject to mold and rot and required extensive maintenance. In 1925, the two-story brick structure, which became known as ‘The Old Ice House’, was built. By this time, harvesting of ice from Silver Lake had stopped but ice continued to be brought into town by train.

The ice from the train would then be stored in the Old Ice House. In 1927, the building was wired for electricity and this allowed ice manufacturing to begin. This operation ran 24-hours per day. All of the ice continued to be stored and distributed from the Old Ice House.

Harvey Waltersdorf, a Board Member at the Rehoboth Historical Society, said, "When we were children and vacationing in Rehoboth Beach, we used to pick up ice from the Old Ice House and use it for in our coolers at our campsites."

A park located directly behind the Ice House had been available for camping, rentals, and vacationers.

"Our watermelons didn't fit in our ice chests or coolers, so we used to carry them over to Mr. Lingo. He'd sternly tells us to carve our initials into the melon and then he'd put it somewhere in the ice," said Waltersdorf.

"We'd come back to the ice to get our watermelons later that day and Mr. Lingo would say, 'Go find your melon.' and let us into the Ice House to retrieve the melons with our initials on them. Then we'd run back to the campsites. Mr. Lingo charged us 15 cents to hold our watermelons," Waltersdorf elaborated.

The business became very successful and manufacturing continued at full capacity until the late 1940’s when electric refridgerators became available and popular for businesses and residences. By the mid-1950s, the ice manufacturing business was no longer profitable and the Old Ice House was closed. The house became used as a storage facility.

The Old Ice House remained vacant until it was sold for non-tax payment at the sheriff’s sale in 1978. William McQuay bought the property for $40,000. He originally planned to raze the building and construct apartments, but this idea never materialized. McQuay did, however, add single-story additions onto the structure. In 1982, he opened a liquor store in the building under a lease arrangement with McQuay’s estate.

When Mr. McQuay decided to sell the property, the City of Rehoboth Beach purchased it for $385,000. The liquor store’s lease did not expire until the final months of 2002. The City had intended to honor the terms of the lease but there was much concern about the sinage on the building. This concern was amicable resolved when the operators agreed to change the name of their business from Rehoboth Liquor Store to the Old Ice House Liquor Store.

Almost immediately receeding their ownership of the Old Ice House, the Rehoboth Beach Historical Society entered into discussions with the city about establishing a museum in the building. In November of 2002, the city entered into a 50-year lease with the Society to establish the Rehoboth Beach Museum. The terms of the lease were actually a partnership with the rent being $1.00 per year; the city paying the electric bills and being responsible for the grounds.

A professional museum architectural firm was hired to design the building as it can currently be seen today. Construction began in June of 2006.

“The Museum designers used all Oak for the wooden elements for the trim, accents, and permanent fixtures and added tin ceilings. The goal was to try to make the updated building have characteristics like the Ice House had in the good ‘ole days,” said Waltersdorf.

The Museum opened to the public in November of 2007.

If you plan to visit the Rehoboth Historical Society at the Old Ice House:

Hours of Operation:
Monday, Thursday & Friday – 10 am  to 4 pm
Saturday and Sunday – 11 am to 3 pm
Admission Fees:
Adults – $5
Seniors and students – $3
Children – $2
Information from brochure available at the Rehboth Historical Society. Feature image from: About My Beaches blog.

Introducing a New Columnist: Silver on the Shore