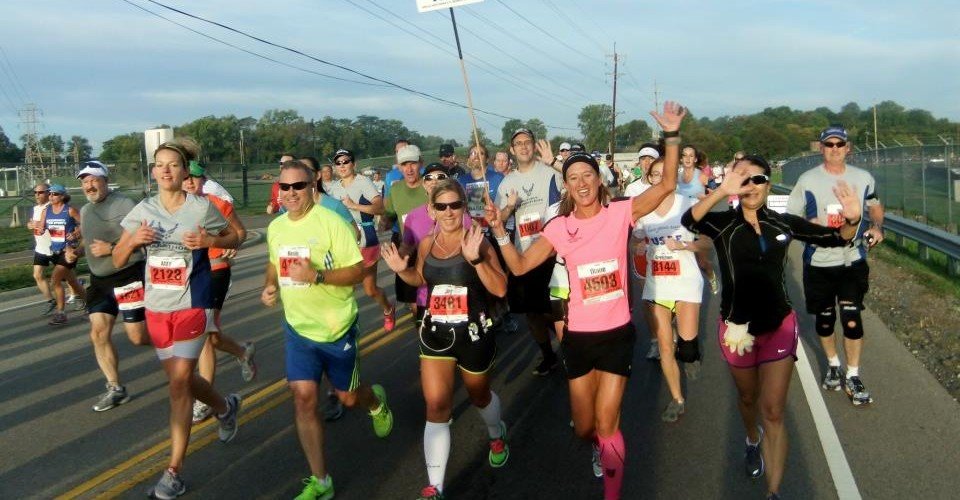 About ten miles in your legs start to go. They are still there of course—pumping, pushing you further, locked into a physical autopilot mode of sorts, down the winding course with no end in sight—but you no longer feel them. The next 16.2 miles, or actually further—unless you happen to cut every turn precisely—become a mental game. It’s no longer the question whether you can physically endure the race; it’s whether or not you are mentally strong enough to do so. From this point forward, aside from one’s own cerebral fortitude, the driving force towards completion in a marathon can come from an unlikely place—or rather, a person, in what is often a singular sport.

Diane Walsh, who lives in Ocean Pines, is a marathon pacer. In the simplest terms, as a pacer, Walsh runs the entire marathon for others. In essence, she even sacrifices the race personally, not training and running to beat her best time, but to keep a certain pace so that throngs of other people can beat theirs—or in some cases, just cross that finish line.

Running a marathon is a ‘bucket list’ item for lots of people. For others it’s the culmination of hours of training and personal tenacity coupled with a drive to improve. In either case, one of Walsh’s tasks as a pacer is to be an emotional coach—someone who bridges the gap between the physical pain or numbness and the ability to persevere. A friend who motivates by running alongside, as Walsh explains,

“When you’re out there on the course and you’re struggling, your body is breaking down, you’re mentally breaking down. I talk to them [the runners] the entire time, keep them going; I’m trying to keep their minds alert, get them off of what their bodies are feeling like.”

By day Walsh keeps busy as the Director of Revenue Management for Clearchannel Radio. Numbers come naturally to her. A skill that only enhances her effectiveness as a pacer. The basic idea behind pace teams is that each team member leads a group of people whose goal is to complete the marathon in a certain number of hours and minutes. Typically, finish times range from two hours and forty-five minutes (2:45) to five hours. In order to finish the race at the goal time, keeping a consistent split (time for each mile), is key. Pacers like Walsh carry signs that reflect the goal time to complete the marathon, and the split time. A pacer’s job is to cross that finish line 30 seconds before the time on the flag.

“Pacers take away the mental calculating. And it’s not just time per mile, you have to calculate water stops, knowing how long can we spend at each and still make time. It’s constant calculations,” says Walsh.

The Heart of a Runner

Walsh is bubbly, energetic, and very welcoming. She is a spitfire with boundless energy, and an even bigger heart. She is in top physical shape; the best of her entire life, so much so that she seems to be aging in reverse. But she wasn’t always like this. Walsh, like so many others, had years where she didn’t appreciate her body and was worlds away from ever envisioning it as the positive machine it has become.

Nowadays the monumental impact running has had on Walsh’s life is evident. She maintains an enviable lease on life fueled by her desire to fill her tank completely with the very physical and visceral reaction she gets from running. In speaking of what she envisions deep into the race that keeps her going, Walsh explains,

“I see myself completing the race, crossing that finish line.”

To illustrate her thought, Walsh throws up her arms as she does at the end of every race, says the word, ’finish’, and tears immediately begin streaming down her face. At this, Walsh is surprised. She is used to her emotional reaction on race day, but just recreating what happens while seated at lunch, conjures up that same emotion and elicits the exact physical response. Running goes deeper into her being than even Walsh realizes—it’s a moment, and it’s not lost on her. The energy responsible for this reaction is what Walsh transfers to each and every runner she paces.  But just like every runner who laces up a pair of shoes and takes that first step, Walsh’s journey had to start somewhere.

Ten or so years ago Walsh was a runner, but only five or six miles at a time, not on par with marathon standards. While at the gym one day she signed up for a charity run for the Leukemia and Lymphoma Society. Through the process Walsh raised money for the organization and learned how to become a long distance runner. She flew to San Diego and ran the Rock n’ Roll Marathon. And that was it—bucket list checked, or so she thought.

“About two years ago, my best friend was upset with her weight and decided to get her life back on track by running in the Marine Corps Marathon. She asked me to join,” recalls Walsh.

That was the gateway moment for her. After an eight-year break since running her first marathon, Walsh was back in. And this time it stuck.

“I trained but I didn’t take it all that seriously at first. But when I crossed the finish line, I came in at 3 hours and 50 minutes—only five minutes away from qualifying for the Boston Marathon,” remembers Walsh.

The Boston Marathon is the oldest and most prestigious in the country.  After training all winter long, Walsh ran the Virginia Beach Marathon in 3 hours and 36 minutes, more than earning her qualifying time for Boston. And then she ran the Boston Marathon, in 3:35.

So what happens next? If a runner, in less than a year has already qualified for, and run the pinnacle racing event in the country, does she just keep trying to improve her time, or does running become something more?

“Running has given me so much. It has made me strong physically, mentally. I think it’s even made me a better friend,” says Walsh.

Walsh runs ten miles a day, and says that no matter what mood she starts out in—happy, sad, angry, frustrated—she is always better off afterward. Walsh feels that the endorphins produced while running cleanse the mind as well as the physical being. It’s also her way to disconnect from the world.

“As soon as I put those ear buds and take off running—that’s it. It’s like my therapy. Think about yoga, anxiety medication, massage, all of these things people do to disconnect. Some people think about running as work, but for me it’s the best mental therapy; it’s like my drug.”

Walsh is able to disconnect so much so that during her first marathon through the San Diego Zoo, she didn’t realize she had passed giraffes or any of the other animals, until she heard other runners talking about them afterwards.

“It’s not what do I think about for four hours while running, it’s what I’m not thinking about: paying the bills, my job, my mortgage. I’m in my zone,” Walsh further explains.

This metamorphosis running has created in Walsh’s life turned into a strong desire to help others. While signing up for the Dayton Marathon, someone mentioned the pace team, and as Walsh explains,

“The running community has given me so much; I just felt this need to give back because running has changed my life.”

And just like that, Walsh turned running into a way to pay it forward.

Since becoming a pacer, Walsh has flown to Cincinnati to help her best friend beat her own personal best. She’s been hugged by runners, one in particular, who broke out in tears crossing the finish line saying she never could have done it without Walsh by her side.

Aside from the reward that comes from being a pacer, Walsh also found a strong sense of community by getting to know other runners.

“Once you know someone is a runner, that’s it—it’s an instant connecting force,” says Walsh.

This weekend, Walsh is pacing the Baltimore Marathon. In her pace group will be a fellow runner that she met as part of a runner’s Facebook community. Walsh says she’s also met a lot of wonderful people locally, being a part of an Ocean City-based running group. Her next big step following this weekend’s marathon is to organize and manage the pace team for OC Tri-running.

But first thing’s first. Saturday Walsh will be supporting all of the runners in her pace group, transferring to them all of the positivity running has brought to her life. With the word ‘finish’ acting as a carrot of sorts, a pot of gold, a mental talisman capable of spurring forth feats of physical strength, mental prowess, and completion that goes beyond simply crossing an end point, Walsh will be holding that flag proud and championing others to their own personal victories.