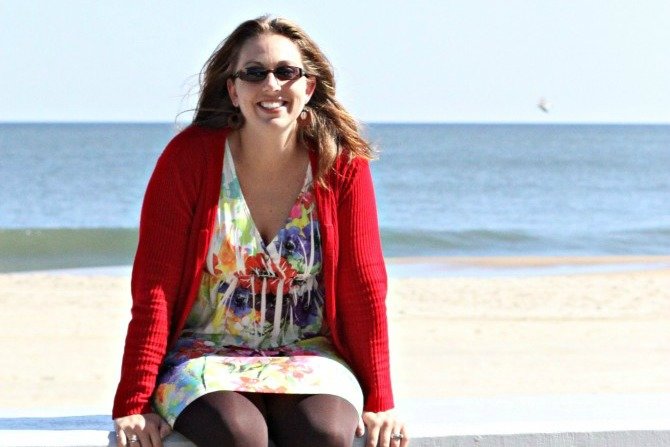 The change from summer to fall for many is represented by a return to school, an adjustment in wardrobe, and drop in temperature.  For Audrey Killen, fall means she’s less likely to end up in the hospital.  The heat and humidity that is mildly bothersome for most people, is a potent adversary for Audrey.

The worst “episode” happened while Audrey experienced a sudden onset of scary symptoms—chief among them, loss of vision in one of her eyes, a condition known as optic neuritis.

As strange as it may seem, flare-ups resulting in loss of vision are simply part of life for Audrey, and others like her.  Audrey has Multiple Sclerosis, diagnosed in November of 2009 after symptoms that included numbness and tingling–initially thought to be a pinched nerve—that began in August of the same year.  Compared to the average length of time it usually takes to diagnose the disease, this process was quite fast.  But it began with a series of wrong directions, and no concrete answers.  As Audrey explained,

“Some people just accept the initial diagnosis [when faced with an unexplained health crisis], which could be the wrong diagnosis.  I was diagnosed in five months—very quick.  I truly believe it’s because I was proactive and my doctors were proactive.”

From the beginning Audrey has resigned herself to taking charge of her health.   But that’s not to say it’s been an easy journey.  When faced with any disease that doesn’t have a cure, the patient has to learn to live it with it, often in a drastically modified way.  Sometimes those changes go far beyond the physical symptoms.

Audrey wanted to become an actress, and lived in Manhattan for a spell to pursue her dream.  She returned to the Eastern Shore to help out her family during a difficult time.  She then stayed close to home and obtained a job at the Ocean City Convention Center as the office manager for the Centerplate, a national corporation that happens to have very good health care.

Audrey’s medication is $4,000 a month; each MRI (she needs about six a year) is $1700.  Formerly employed as a bartender and hopeful actress with no insurance, treatment for her disease would not have been possible.  Audrey is certainly thankful for her job and enjoys it, but she’s also tied to it in a way most people aren’t.  She needs it to maintain her treatment—which also means her dreams of becoming an actress are on the back burner, perhaps permanently.

Audrey isn’t the type of person to dwell on that kind of reality—looking back now she sees the progression of events as a kind of “meant to be scenario.”  And even in the direct aftermath, Audrey very quickly decided she needed to be positive, do something that could help her cause.

“I was not willing to accept this is it, that I was just going to give myself a shot everyday.”

Initially Audrey involved herself in organizations already in place.  And while it was nice to be part of the fight, Audrey wanted to do things a little differently.  It takes deep pockets and a large operational budget to maintain a national foundation with various chapters and groups.  After seeing how much donation money had to be allocated to simply running some of the organizations, Audrey decided to create her own foundation—simplify the process, and tackle more than just MS—she was going after something larger.

Multiple Sclerosis is a disease that affects myelin, the protective coating on the brain and spinal cord.  Lesions and scar tissues form, resulting in the symptoms Audrey experienced, and a host of others.  MS is a part of an umbrella group known as Autoimmune Disease.  Over 80 such diseases have been classified including Type I Diabetes, Lupus, Rheumatoid Arthritis, MS, and even various skin disorders.  These seemingly very different diseases are grouped together because of their shared underlying problem—the immune system, whose normally functioning purpose is to protect against infection, but in these diseases, it overreacts and attacks the body instead.

Autoimmune Disease affects an estimated 5 to 8 percent of the population, with a much larger percentage of those affected being women, and diagnosis is on the rise.  They tend to strike in women of childbearing age, often after a pregnancy.  In others, they surface after a difficult illness, or stressful situation causing emotional and physical taxation.  In Audrey’s case, she had come home to take care of her dying grandmother.  In the aftermath of that trauma, she experienced her first documented episode.

These diseases can be debilitating, crippling, and their complications can lead to an earlier death.  The fact that very little was being done to figure out the “why” piece of this puzzle, coupled with her desire to help others, caused Audrey to create her own foundation, Operation Shooting Star.

Audrey felt that most doctors tend to treat the symptoms instead of looking for a root cause—she wanted to contribute directly to those doctors and research projects that would find the cause, leading to a cure.  During a scheduled appointment with her specialist Dr. Royal at the University of Maryland, Audrey discussed her idea.  Dr. Royal heads up the Maryland Center for Multiple Sclerosis, and assured Audrey that not only would every dollar raised go to research, but that she could even select the project to put the money towards.

Even though this research facility is concentrated on MS, Audrey’s feeling is that,

That mentality is behind the slogan for Operation Shooting Star, “Cure One, Cure All.”  Recently the University of Maryland announced the allocation of grants in support of an Autoimmune Disease research facility—indicating that the medical community may in fact share in Audrey’s belief.

Operation Shooting Star began when Audrey held an event at Trader Lee’s in West Ocean City.  Business and community members were completely supportive and donated everything needed.  Following, Audrey wrote a check for $4,862 to Dr. Royal, and had the privilege of walking through the research facility at the University of Maryland to see exactly where the funds were going.  It was a hugely rewarding experience, and the moment she knew she could do this—Operation Shooting Star had become a reality.

For now, Operation Shooting Star is a one-woman operation.  In addition to her regular job, and dealing with the effects of her disease, Audrey has to carve out time to run a foundation.  This is her baby right now—she’s nurturing the foundation in its infancy–often when she’s already exhausted, but she’s excited to watch it grow, and knows she has started something that has the potential to affect millions.