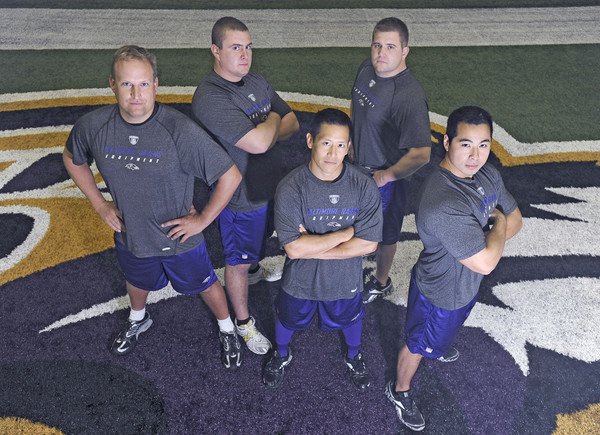 The Baltimore Ravens are known for their standout players, but on the sidelines they stand out for another reason.

For years, the Baltimore Ravens have tried to distinguish themselves from every other team in the NFL with a ferocious defense. While still formidable, the Baltimore defensive unit was not in a class of its own this season, ranking third in yards surrendered per game and points allowed per game. There is still one thing that the Ravens have that differentiates them from everyone else: male cheerleaders.
Wearing a T-shirt and jeans by day, Jim Schwille sells lumber. But at night, he steps into another outfit.
Schwille – a veteran of the Afghan war— moonlights as one of the male cheerleaders on the Baltimore Ravens squad.  He’s joined by a DJ, a plumber and an aerospace engineer.
“I brought a bag in that said ‘cheerleading’ on it, and I got a lot of weird looks from people,” said Gregorio Monge, Ravens cheerleader.
“They give you a hard time about it, too, and then after they see you on the field with all the ladies they’re like ‘You have the best job ever,’” said Chris Traczyk, Ravens cheerleader.
Since 1996, when the Ravens began in Baltimore, they’ve been the only football team  in the NFL with a co-ed cheerleading squad. The women say the men allow them to do more.
“A lot more,” said Tina Galdieri with a chuckle. “I mean, it’s more gymnastics ability and flipping and twisting.”
It is a strenuous balancing act. These guys say the crowd is just waiting for them to drop one of the women.
“It has happened before and you hear that crowd. They’re like ‘ooohhhhhh!’” said Tony Martin, Ravens cheerleader.
While the guys are the brawn, they know the women are the beauties. The men don’t even make it into their own team calendar.
And forget about getting TV time.
“My brother actually has to pause the TV and like take a picture, ‘Oh, I saw you on TV!’” said Martin with a chuckle.
Altogether, the Ravens’ sideline cheering contingent is comprised of 40 women and 20 men. The co-ed team has even spawned romance, with male and female teammates falling in love and eventually getting married.
So while there isn’t a lot of fame or fortune, there is something that, for these guys, is just as valuable.
“While the game is going on, you’re watching the whole thing. It’s literally the best seats in the house,” said Brian.
The stipend for a cheerleader is just $100 a game.
To read more about the Ravens, visit Russell Street Report:

Featured photo by Kenneth K. Lam of the Baltimore Sun.