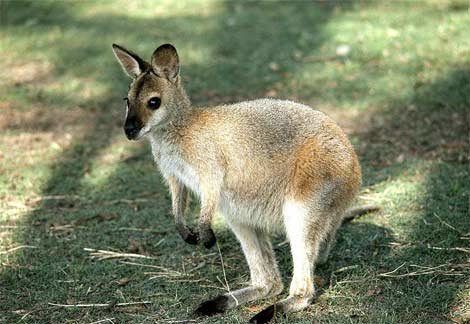 The Salisbury Zoo has gone under with the addition of the “Discover Australia” exhibit, which included a pair of new wallabies named by the community.

Discover Australia is one of three priority projects designated by the community and funded by the Delmarva Zoological Society’s Renew the Zoo Capitol Campaign, which raised a combined $3 million for the projects. While a new animal health care clinic and a new environmental center, the other two projects funded by Renew the Zoo, are expected in the near future, Zoo Director Joel Hamilton explained that the wallaby exhibit was “fast-tracked” in response to requests from the community.
Hamilton, who recently announced his departure from Salisbury to serve as vice president and general curator of the Audubon Zoo in New Orleans, said that he was impressed by the efforts taken by the zoo’s supporters to bring the two wallabies to Salisbury.
“I would imagine that, throughout this whole process that if I asked for a raise of hands for who’s had a part in making this a success that just about every one of you would raise your hand,” he told the crowd during Discover Australia’s unveiling Friday. “So it is definitely a community effort.”
In acknowledgment of the strides taken by fans of the zoo, both wallabies in the exhibit were named by children in the community. The first name was chosen by Jen Fenzel’s fifth grade class at Westside Intermediate School (WIS), which was also the class that raised the most money last year during Salisbury’s Just Zoo It campaign.

The rights to name the wallaby were purchased by Frank and Kim Nechay during a charity event. The couple passed along the rights to their daughter, Abbigail, who chose to let her entire class in on the process. Students each wrote a persuasive essay outlining their choice for a name.
The eventual winner was Alannah Raygor, who named the first wallaby “Irwin,” in honor of the late Australian wildlife expert and television personality Steve Irwin.
The second wallaby was named “Skipper” by 8-year-old local resident Brooke Mulford. Diagnosed with Stage-IV, high-risk neuroblastoma, an aggressive form of cancer, at just age four, Mulford has spent roughly half of her life fighting the disease and has been a popular and inspirational figure in the community throughout.
Skipper and Irwin are male, red-necked wallabies, also known as Bennett’s wallabies. Full-grown they will stand about three feet tall and weigh between 30 and 40 pounds. Two female wallabies and another male are expected to join Skipper and Irwin at the Salisbury Zoo in 2013.
Besides funding from the Renew the Zoo campaign, Hamilton explained that it was only because of additional grants and donations that the zoo was able to open Discover Australia roughly a year ahead of schedule. He cited Just Zoo It as a huge help in the endeavor.
“It was a phenomenal success,” said Hamilton. “It raised over $30,000 with cans of coins.”
Additional support came in the form of a $300,000 matching grant from the Richard A. Henson Foundation and a gift from George and Anne Miller through the Hallowell Foundation.
Hamilton said that the swell of support for Discover Australia and continued improvements to the zoo are a clear indicator of how important the institution is to the people of Salisbury.
“This is just a testament to the rest of what goes on at the zoo,” he said.
Plans are already in place to expand Discover Australia over the next couple of years to include emus and a walk-in aviary.
While the event was positive Friday, Mayor Jim Ireton did take a moment to express his sorrow at Hamilton’s departure.
“This is a sad time for us because we will miss Joel’s friendship,” he said, “and we will miss his leadership.”
But Ireton also congratulated Hamilton on his new position and wished him well in New Orleans.

Shorebilly’s Swill: Syd Gets the Holiday Warm and Fuzzies