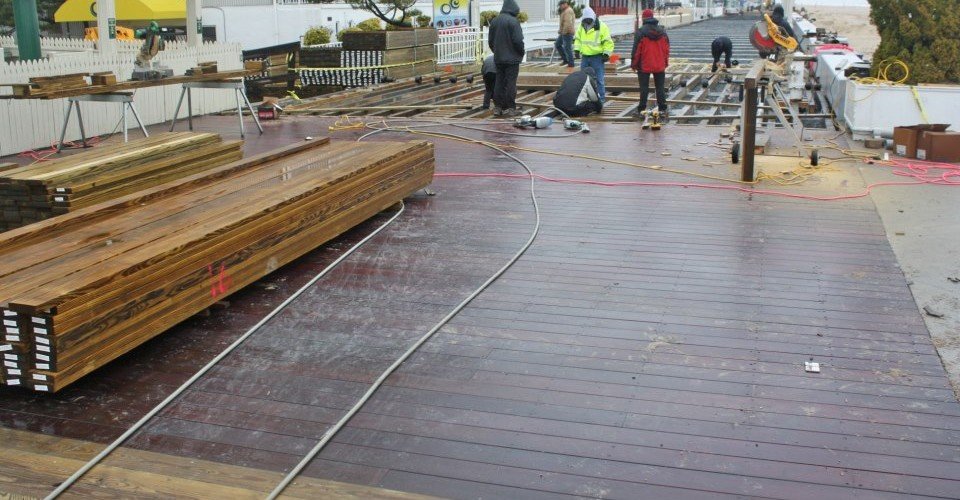 Placed in a timely manner as the Baltimore Ravens head to the AFC Championship this weekend, a unique purple section of Ocean City’s new Boardwalk was placed this week.

While some may think it was placed to show pride in the Baltimore Ravens, the purple wood, called Purple Heart, was a planned marker on the Boardwalk to differentiate where the tram route moves from its own concrete lane and joins the wooden surface.
The purple section of the Boardwalk begins on 4th Street in front of Shenanigans Irish Pub & Grille. City Engineer Terry McGean explained this location is where the concrete tram lane ends.
“Basically if you’re going south to north, we go from a Boardwalk with a two-lane pattern with the train running on the concrete to a three-lane pattern with the train running down the center of the Boardwalk, and I needed some way to make that transition without it looking goofy,” McGean said.
McGean said he was aiming to make the transition so that it would stand out and become apparent to Boardwalk visitors that the environment changes to the point where the tram enters the Boardwalk.
“I also wanted to add something unique, something that other Boardwalks don’t have,” McGean said.
McGean came across the purple wood a number of years ago and has been looking for a way to use it ever since. Purple Heart is a hardwood that is dense and durable, deriving from South America.
“When it is growing, it is brown but when it is cut down, sawed and exposed to sunlight it turns into a deep eggplant purple,” McGean explained. “Over the years, it will weather into a brown color but will still keep a purple hue.”
When he chose to work with Purple Heart, McGean said he had no idea it would be installed days away from the Ravens seeking their first Super Bowl berth since 2000.
“I had the Ravens in the back of my mind but it sort of just worked out in timing,” McGean said.
The first phase of the reconstruction project of the Boardwalk ended up coming in significantly under budget. That allowed plenty of wiggle room for McGean to come up with a unique way to mark the tram’s transition into the boards. The cost for the Purple Heart wood in that 50-foot section was $35,000.
“You will also see the way it was put down it is more staggered because it is also very expensive to get it in set lengths, so we ordered it as random lengths, which worked out well because it helped make that transition,” McGean added.
The Boardwalk reconstruction is now complete through 4th Street and on the south end the re-decking is complete almost to Caroline Street where a portion will be left open while the new Caroline Street Comfort Station and Stage is being built.
“The project is still on schedule and everything is going well,” McGean said.
Phase two of the Boardwalk’s reconstruction began in early October and is planned to end in April. The second phase will finish the entire Boardwalk reconstruction from Somerset Street to 15th Street.
Last year, the project’s first phase included a section from the north terminus at 27th Street to 15th Street, along with another section between the Inlet and Somerset Street.
As in the first phase, the second phase includes removing the old wooden decking and making major repairs to the aging substructure underneath. When that work is completed, the wooden deck will be replaced with new boards laid down in an attractive pattern that also identifies the Boardwalk tram lane.

ShoreBread’s Best of the Coast 2013