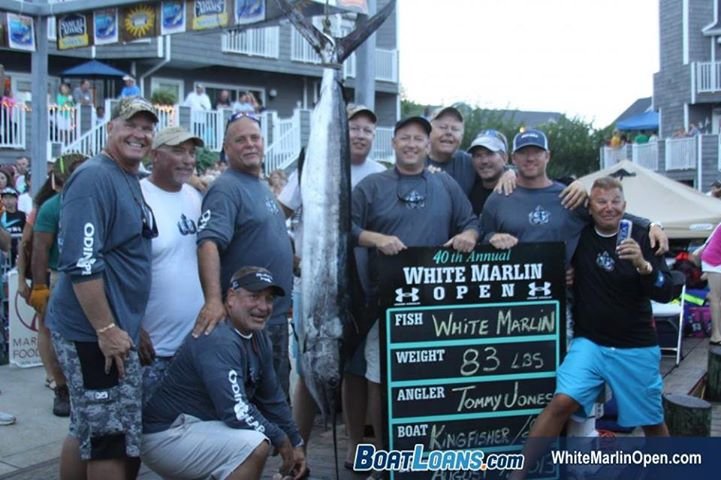 The 40th White Marlin Open yielded big payouts last week, with the top white marlin bringing in a whopping million dollars. The top honors went to Tom Jones of Severna Park, who topped the leaderboard with a $1.2 million, 83-pound white marlin that he caught on the third day of the tournament. Jones was fishing on the Ocean City based sportfisher, Kingfisher and OdinSpear, who teamed up after a boat malfunction on the Kingfisher earlier in the week.

The white marlin category came with its fair share of drama early in the week, with an unprecedented three-way tie at one point. A crowd of several thousand watched and cheered Wednesday evening, as the three-way tie unfolded. The excitement escalated when the Kingfisher pulled up to the docks at Harbour Island with another big white marlin to throw into the mix. The Kingfisher’s marlin was raised at the scale, registering 83-pounds and bringing a surge of excitement among the crowds. The Kingfisher catch would remain at the top of the leaderboard throughout the remainder of the week, clinching the million dollar pay out.

The tuna division brought excitement as well, with a steady stream of competition throughout the week. James Czaban and the Sushi of Oregon Inlet, N.C. reigned supreme in the tuna division, with a 276-point tuna, brought to the scales on Friday. The winning tuna was the big crowd pleaser for the closing day at the weigh-ins, with a $573,850 payday. 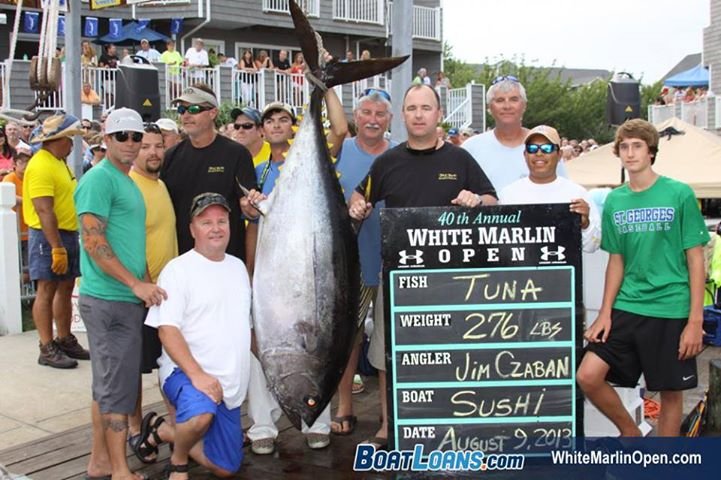 Other leading division winners included a 34-pound dolphin caught aboard the “Why Not” of Stuart, Fla. by Westminster angler Jeff Collins. The winning dolphin was worth $14,298. D.C. angler John Simmonds and the Streaker of Fenwick Island, Del. caught a 70-pound wahoo, while Ocean City’s No Quarter and Wilmington, Del.’s Mike Peet reeled in a 133-pound shark. Other big scores included handsome payouts to the 3-way-77-pound white marlin catches. The Sea Mistress of Avalon, N.J., the Lights out of Key Largo, Fla. and the Sea Toy of Pirates Cove, N.C. all walked away with $102,498 paydays.

262 boats fished in this year’s open, bringing thousands of spectators to Harbor Island for the 5-day fishing tournament. The milestone 40th White Marlin Open didn’t disappoint, with excitement all week long at the scales. Some years, the big winners are caught early on in the week, with a follow-up of challengers falling just short of topping the leaderboard. In other years, the big winners aren’t weighed in until the last day. Either way, there is always excitement at what is recognized as one of the top billfish tournaments in the world. The crowds subsided late Friday evening, as the sun set on the 40th White Marlin Open. With big winners, big crowds, and even bigger excitement, this year’s tournament marks a highlight of this summer, as the countdown to the culminating Labor Day Weekend begins. 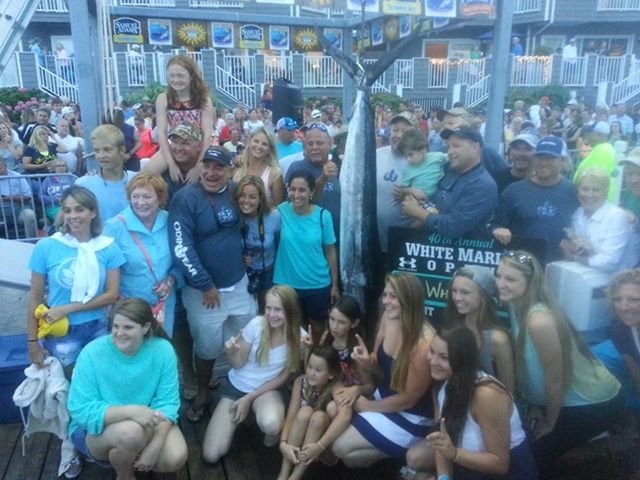