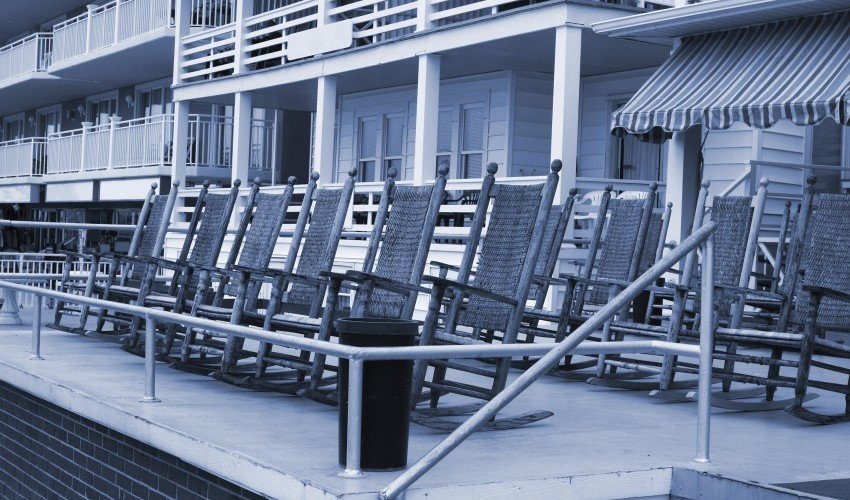 We don’t often associate Ocean City with the word “historic,” but look past the summer crowds and the new condo buildings and you’ll find a deep history, particularly in downtown Ocean City. From the inlet to 3rd Street, also known as “Old Towne,” there are a number of historical buildings, with many dating back to the 19th Century. We decided to stay close to home this week, going Day Trippin’ over the Route 50 Bridge for a Walking Tour of Historic Downtown Ocean City. Sponsored by the Ocean City Development Corporation (OCDC) and The Downtown Association, the Walking Tour takes you on an informative stroll through Old Towne Ocean City. What’s more, it’s a self-guided tour so you’re free to move at your own pace. Simply download a brochure or pick one up and start walking! **Brochures can be found at the Information Cottage at the Boardwalk between N.Division & Caroline Sts. or at the OCDC at 108 Dorchester St.)

“The tour was originally more of an off-season type of activity,” explained OCDC Executive Director Glenn Irwin, adding that the tour quickly became a year-round activity, with visitors and locals enjoying the historical elements of downtown Ocean City. The tour is actually broken down into two sections, explained Irwin, with a section between the inlet and 3rd Street and another from 3rd to 15th Streets (referred to as Upper Downtown). Both tours highlight the historical and architectural elements of the southern part of the town, from the Life-Saving Station Museum to Trimper’s Amusements. While Upper Downtown includes buildings built primarily in the 20’s and 30’s, “you still get turn of the century buildings in the southern downtown area,” said Irwin, adding “it’s amazing how many buildings were built in the 1930’s, in the heart of the depression.” Many of the buildings have been restored and modified over the years, but some of the key architectural features are still in place. There are 19 stops along the Historic Downtown Tour, with 40 in the Upper Downtown Tour.  Also included in the tour brochures and on many of the plaques outside the buildings are QR codes that allow you to scan the bar code with your smart phone for access to a short video associated with the building or property.

Irwin pointed out a few fan favorites along both tours, saying, “the churches I think people really like the most. Those are the most noticeable buildings. And the Life-Saving Station of course is what a lot of people stop to look at.” Below are a few highlights we’ve selected:

Tarry-A-While – The Tarry-A-While Guest House was built in 1897, serving as a guest house. It is one of the few remaining buildings in the town from the 19th Century. Fun fact: this was one of the first houses to offer running water in each bedroom. Today, the building sits in a different location than it originally sat – the building was moved in 2004 to make room for new construction. Today, the Tarry-A-While serves as the OCDC headquarters, as well as housing in the summertime for lifeguards and seasonal police officers.

St. Mary’s Star of the Sea Catholic Church – Did you know that St. Mary’s is the oldest existing building in Ocean City? The Catholic Church was built in 1878, just a few years after the town was founded. While it seems odd that such a beautiful structure would be erected at a time when the town was basically empty in the winter time, one can assume that a large segment of the visiting population must have been Catholic (particularly since the first Catholic family didn’t settle here until the 1920s).

City Hall – The building that we now know as City Hall was originally built in 1915 to house a college. The idea of a college in Ocean City was quickly abandoned and used instead as a Worcester County school for the children of Ocean City and its surrounding areas. In 1968, the Town of Ocean City acquired the building and it has since been used as the Town’s City Hall.

Shoreham – The Shoreham is a mixed-use building, housing both the Shoreham Hotel and Shenanigan’s. The building was constructed in 1925, with a rear addition built in 1930.

Majestic Hotel – The Majestic Hotel was originally built in 1925, operating as the Liberty Farms Hotel. The name was changed in 1930, and the Savage family has owned and operated the Majestic ever since. It is said that the lumber for the building was cut in West Ocean City and floated across the bay.

713 Atlantic Avenue – For years, locals have cherished this location for its surf shop, Malibu’s, which is located on the ground floor of the building. The upper floors are reserved for residential use. The building, built in 1945, has been owned by the same family since the 1970’s.

Lankford Hotel – This old-time hotel was built in 1923-24, and is one of the best preserved older hotels in Ocean City. The hotel’s namesake comes from the original owner’s aunt – Amelia Coffin Lankford.

Royalton Hotel – The Royalton is also an old time hotel and was built in 1927 by Harry and Ethel Kelley, parents of the former Ocean City Mayor Harry Kelley.

The tour includes many other stops and fun facts, but you’ll have to discover them for yourselves. If you’ve driven through Ocean City lately, than you’ve noticed that the off-season is officially here. What better time than now to grab a Walking Tour brochure and take a slow stroll through downtown. It’s not often that we get to stop and take a moment to notice the historical and architectural beauty of our little resort town, so get Day Trippin’!