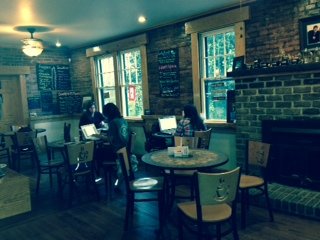 The quaint brick building that houses Pemberton Coffeehouse has seen its fair share of changes over the years, transitioning from a home, to a variety of commercial uses, to its current state as the Pemberton Coffeehouse.  After hearing high praise about the coffee at the Salisbury bungalow, we decided to check out the scene for ourselves last week. Having not been in the old building since its renovations, we were notably impressed with the outcome, from the exposed brick, to the cozy fireplace to the fantastic views from the back deck. Beyond the physical overhaul, the new space is home to made-from-scratch baked goods, gourmet coffees and teas, freshly baked breads, and more.

“It was nothing like this before, so we completely renovated the whole thing,” explained owner Alex Failaev, who owns and operates Pemberton Coffeehouse with his wife, Erin, as well as his wife’s parents, Penny and Kevin Twilley. Failaev and his wife had noticed the lack of healthy options and quality coffee in the area,  and decided to capitalize by opening their own venture. “My wife was always baking and we thought, Salisbury doesn’t really have anything unique like this,” explained Failaev. Once they saw the space on Pemberton, they instantly knew they had found the perfect spot, particularly when their eyes caught the spectacular water views out back. They had their work cut out for them however, with over a years’ worth of work in renovations. Failaev’s father-in law, who is a general contractor, took control, said Failaev adding, “he basically designed the whole place. He loves the exposed brick and the yellow pine.”

While securing the space and undergoing renovations, Alex and Erin began the exciting but arduous process of finding the perfect selection of coffee and teas. There are nearly 20 rotating coffees at Pemberton Coffeehouse, with all of the coffees made with a French press. All of the coffee is also direct trade, while the entire tea selection is fair trade.

“We didn’t want to compromise on anything,” said Failaev of their menu selection. ‘Everything is made from scratch, everything.” All of the breads and desserts are made on the premises, with no preservatives  or artificial ingredients used. There are three different types of bread baked daily; challah, marble rye and Ezekiel.  The Ezekiel bread is particularly unique, and healthful, made with unbleached and unbromated King Arthur’s flour, 7 grains berry blend, rye flour, brown rice, millet, Northern beans, Pinto beans, large lima beans, black-eyed peas, garbanzo beans, green split peas, kidney beans, cranberry beans, red beans, yellow split beans, lentils, navy beans, white kidney beans, black beans and honey. The fresh challah bread is also popular, said Failaev, “people can’t seem to get enough of it.” The challah bread is also used in the homemade bread pudding. The combination of their 150 year old recipe and the freshly baked bread has resulted in Pemberton Coffeehouse’s signature item. The bread pudding is available in triple berry, cinnamon pumpkin, banana caramel and cinnamon apple.

Other desserts on the menu include massive turnovers stuffed with apple & cinnamon, raspberries, or mango & pineapple, sticky buns covered in toasted pecans, and varieties of scones and muffins. Gluten-free and vegan desserts are also available. We devoured a gluten-free raspberry almond bar post-interview and quickly went back for a second helping.

For the savory snacker, there are plenty of options, particularly off of the breakfast and lunch menus. The breakfast menu includes a number of egg dishes, like the Turkey Breakfast Casserole,  comprised of hash browns, fresh eggs, mozzarella cheese, tomato and baby spinach. Popular lunch items include the curry chicken salad and the Ruebenator. For the veggie eater, we suggest the Eggplant Tahini – roasted eggplant drizzled with olive oil, paprika, tomato, baby spinach, feta cheese, and topped with a house Tahini dressing. In addition to sandwiches, there are soups and salads to consider.

While Pemberton Coffeehouse does not currently serve dinner, it won’t be long before Friday and Saturday night gourmet dinners will be available. “We will be serving really unique dishes that you can’t really get anywhere else around here,” said Failaev.

In addition to in-house dining, Pemberton Coffeehouse has expanded into the catering business since opening their doors nearly two years ago. Business meetings, birthday parties, weddings, family gatherings, you name it, they can cater it. Weddings have also become popular at Pemberton Coffeehouse, which has hosted 5 weddings since opening. “We provide everything from food to decorations,” said Faileav, adding that the back deck provides ideal views for a wedding anytime of year.

Other on-site events to enjoy at Pemberton Coffeehouse include live music just about every Friday and Saturday night, as well as a Brew Review on the first Friday of every month. “We have a really nice selection of artists,” Faileav said of their performers, which include a diverse mix of local musicians. For the monthly Brew Review, expect a selection of seasonal beers.

With an expanding business and a solid following of loyal customers, Pemberton Coffeehouse is gearing up for a busy holiday season. November 14th, they will be hosting a “Taste of the Holidays” evening, inviting customers to join them starting at 6pm for a sampling of their holiday offerings.

“We are really blessed to have great employees here, we are one big family,” concluded Failaev at the end of our chat, adding, “we have a very loyal customer base, they come because the quality is good.” After sipping on a dark roast and nibbling on a couple raspberry almond bars and some peanut butter fudge, we’re confident we will quickly become a part of that loyal customer base. 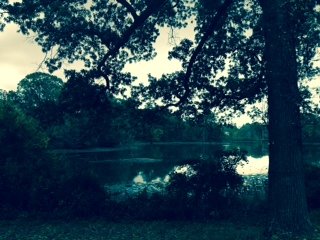