I awoke the other day to a temperature of 8 degrees. I have no problem with any temperature that starts with an 8, in fact I’m a big proponent. But I need that 8 to be followed by a second digit. Just 8 by itself has neither enough digits, nor enough syllables to accommodate my rapidly aging, long hard working joints. It’s not conducive to my plethora of poorly healed battle scars from my youth either. Once it gets that low, I feel and relive every injury I’ve ever sustained. Another unfortunate side effect to single digit temperatures is that it causes my morning extraction from bed to be at least a two person job.

I saw the numbers 34, 58, and 16 this week. These were not Lottery numbers being drawn. These were not bingo numbers being called. They were not the chants of a seasoned veteran quarterback calling audible signals at the line of scrimmage. No, these in fact were the projected high temperatures in my zip code over a period of just 72 hours. How the hell do you prepare accordingly for that? I thought at one point that all meteorologists and weather prognosticators had come off of their meds. Mother Nature had gone full blown bi-polar with the emphasis on ‘polar’.

I was once led to believe that taking up residence at this particular line of latitude had rendered me exempt from such weather anomalies. I now know that I was wrong. I’ve only been wearing socks outside of work for about two weeks, and now I have to double up. I’m even wearing layers to sleep in. I don’t mean to sound like a whiner, but I would make a terrible Eskimo. I am also completely aware that people in different regions have it much, much worse than we are experiencing. I have family in Chicago for example. My brother-in-law sent us a picture of his forecast the other day which showed a high of -14 with a wind chill of -40. They have my sympathies, and I’ll be the first to admit that really sucks for them. But that’s also precisely the reason I live here and not there.

I’ve listened to and heard many of the arguments for “Global Warming”. Some of them are very compelling, and some of it I actually believe. At the moment however, the only thing rising in and around my home is my power bill that I have no idea how I’m going to pay by the end of this. Now they’re coming up with new scientific terms and throwing phrases like “polar vortex” at us. I have no idea what that means, but what I do know is that I froze my ‘vortex’ off earlier this week.

Just within the past week, I was killing flies in my house. And now I can drive my van across the canal out back. Whoever put Cybil in charge of the weather machine, could you please return to the bridge and take the wheel back from her? That experiment isn’t working so well.

As if the Yeti-friendly conditions we’ve been experiencing aren’t enough, I’m on my annual four-week hiatus from work. No, it’s not really a vacation, per say. The restaurant just closes for the slowest month of the year to give everyone a little break and put wind back in our sails. We usually do some painting and such in the restaurant around this time. Those of us on staff with the means, use this time to travel and take vacations. Those of us with four kids who live in a house with three little girls, a wife, and a female cat, buckle up in fetal position and sit in the corner of the guest bathroom and tremble convulsively for the month.

Of course I’m just kidding. I actually eagerly look forward to my sabbatical so that I can spend every waking moment with my girls. Hopefully we can get their big brother to come spend some time with us during the break. There are only so many things I can do with them with this recent weather, though.

We got four inches of snow earlier this week. I don’t even know when, I just know that it happened. I’m like four days into my break, and I have no concept of time already. I’ve arranged for a wakeup call on February 7 so I know when to go back to work. Anyway, the excitement in my house when we woke up to snow was palpable. All three of my daughters were plastered to the window like the stick figure family in the rear window of a Suburban. My youngest had not seen snow before so she was completely bewildered. The other two just couldn’t wait to get out there and play. My wife and I began the long and arduous process of getting everyone dressed appropriately for our venture into the winter wonderland.

The nine-year-old is capable of dressing herself, even for such conditions, so needless to say, she was ready well before the rest of us. She went out to play while my wife and I layered our two little ones as if they were about to walk on the moon. The process took roughly an hour and by the end, these two sweet, excited little angels had more layers than a good piece of homemade baklava. About halfway through the process of dressing them, the nine-year-old came back inside, had to completely strip down, and put on a whole new batch of clothing. This was red flag number one, but somehow in our excitement we failed to read the tea leaves. As we applied the final touches to their arctic worthy outfits, we realized that these two girls only have knit mittens, nothing waterproof. Red flag number two–again unheeded. By the time we got to the front door, they were both jumping up and down and screaming with excitement over the prospect of flopping about in the beautiful snow.

We got as far as the second step. As if choreographed, they both fell forward and face-planted in snow banks. The only exposed portion of their bodies was between their eyebrows and the tips of their noses. These regions were now completely caked with snow on both of them to the point that we couldn’t tell them apart. Their nice wool mittens that Santa had brought didn’t even make it down the steps and they were soaking wet.

I was still zipping up my coat, and two of my daughters were miserable and crying hysterically begging to go back in while the third stood speechless looking at me with the same complexion as Smurfette. Can I show my girls a good time or what? Missed red flag number three by the way was that I failed to check the temperature before we went outside. It was a balmy 11 degrees. Oops.

We got one of the cars out, and my wife immediately went shopping for all the necessary snow gear that we, as crappy parents, had failed to provide in advance. Several stores later, she resigned herself to the fact that she could easily find bathing suits and flip flops in every style, color, and pattern one could imagine for all three girls. But gloves, boots, hats and mittens were nowhere to be found. Apparently there are no harbingers of garments or outerwear in this region who can accommodate procrastinators. Guess I’ll have to wait until July when they have all of this stuff in stock.
Thanks for playing along everybody. Stay warm. 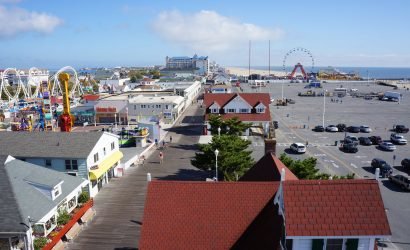 Plan Your Vacation in Ocean City