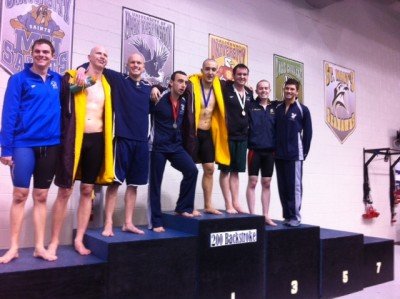 Salisbury University may be well known for many reasons, whether it be the terrific lacrosse team or the Perdue School of Business. However, one aspect of the school that does not receive a large amount of attention is its swim team; that is, until recently. At this past weekend’s Capital Athletic Conference championship swim meet, the team had an outstanding performance, breaking 11 team records and making a real splash in the pool.

One of the newest members of the team is freshman Okan Eyigor, who traveled from Istanbul, Turkey to join the Seagulls. Eyigor has had an impressive season, setting multiple school records and even a pool record at rival team York College in the 100 backstroke event. This past weekend was no exception to Eyigor’s terrific swimming streak. The swimmer seamlessly surpassed both the team’s 100 backstroke and 200 backstroke records, the 100 butterfly record and was also a part of the record breaking 400 medley relay and 800 freestyle relay. Eyigor also won first place in his 200 backstroke event, becoming the first Sea Gull to win a championship event since 2009.

We were lucky enough to nab a quick interview with Eyigor, sitting down to discuss swimming, as well as his experience so far in America:

1. What has your experience been like in America so far?

I like it… I get to learn about different people… different culture and everyone is friendly.

2. What are some of the differences between the U.S. and Turkey?

Here when two men greet each other they shake hands. In Turkey, you kiss them on the cheek… on both sides.

3. What are some of the differences between swimming here and in Turkey?

Its not that different in Turkey except we only swim in meters.

4. What is your favorite stroke in swimming?

Backstroke, because your face is out of the water so you can breathe a lot. Also you can look around and see the other swimmers during the race.

5. Is it hard being so far away from home to go to school?

Yes it is hard to be away from home. But I’m here part of another wonderful family which is the (swim) team, coach Jill and SU parents.

We also asked Coach Jill Stephenson how her experience coaching Eyigor has been; she told us “It has been wonderful, he is a hard worker and easy to coach.”

On the women’s side, freshmen Victoria Radcliffe broke two school records including the 200 IM and the 200 breaststroke.

Overall it was a great weekend for the Sea Gulls to wrap up their swim season. With many seniors leaving the team this year there were some tears at the final ceremony but we at ShoreBread can’t wait for next season and the records that will undoubtedly fall then.