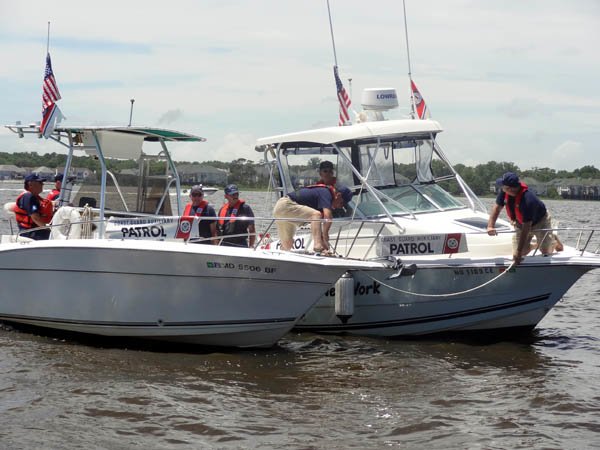 Ocean City MD– The 2014 National Safe Boating Week campaign kicked off Saturday, May 17 with Coast Guard Auxiliary units promoting recreational boating safety around the nation.  The campaign – which runs through May 23 — is dedicated to helping boaters understand the need for boating education and Vessel Safety Checks, as well as the importance of wearing life jackets while boating.

In Ocean City, the Coast Guard Auxiliary’s National Safe Boating week kickoff event was held at West Ocean City Boat Ramp on May 17 to reinforce the safe boating message.  The kickoff event included free vessel safety inspections and handout information that include Tide Charts and information on the Coast Guards’ American Waterway Watch program.  Vessel Safe Inspections are conducted during the summer months every Saturday and Sunday from 0800-1200 at the Ocean City Boat ramp in West Ocean City.

“National Safe Boating Week gives us an opportunity to reflect on the safe operation of boats on the water.  The incidents we study bring home the need for simple safety precautions while underway,” said Rob Sersen, Coast Guard Auxiliary, Sector Baltimore Captain.

According to the Coast Guard’s 2012 Recreational Boating Statistics, nation-wide there were 4515 accidents that involved 651 deaths, 3000 injuries and approximately $38 million dollars of damage to property as a result of recreational boating accidents.

Almost seventy-one (71) percent of all fatal boating accident victims drowned, and of those, almost eighty-five (85) percent were reported as not wearing a life jacket.  However, only nine (9) percent of deaths occurred on vessels where the operator had received boating safety instruction from a National Association of State Boating Law Administrators (NASBLA) approved course provider. 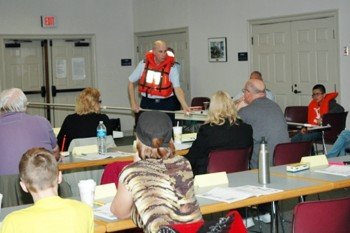 “We encourage everyone to wear their life jackets and use a ‘kill switch’ while boating,” Sersen said.  “Frequently, we see young children in life jackets, but their parents are not wearing them.  All of us need to find a life jacket that fits, is comfortable, and wear it to protect ourselves and set a good example for others.  I wish the boaters of Maryland a safe boating season.”