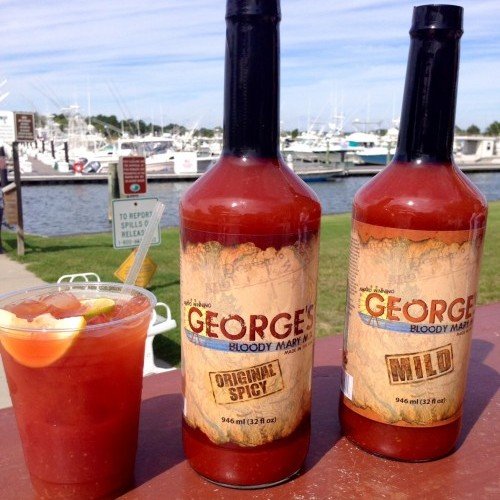 “Being a bartender… Greg’s main complaint from patrons in the restaurant business was that the Bloody Mary’s were always inconsistent,” said Theda Bakis, one of the founders of George’s Bloody Mary Mix. “Either the mix was too bland or too much, so he basically took the reins and developed a recipe, the idea behind it was being a bartender and hearing customer concerns first hand, we really wanted something quick and consistent.”

We can contest- once you taste George’s Mix, you instantly think perfection. But more importantly, the story behind the growing brand makes it all the more satisfying. “The toughest part was definitely getting the measurements perfect and really narrowing down a recipe,” said Bakis. “Because, for so long we’d been eyeballing it that it took us months to try and achieve the exact taste we wanted using exact measurements.” Greg, Theda and Alex (the founders of George’s) know firsthand what it’s like to build from the ground up. “We’re all in the service industry, we still are!” laughed Bakis. “We started on tip money and have really built it up from there.”

Their success has not gone unnoticed, as George’s Mix is now is served in over 800 locations in famous restaurants and liquor/beer stores all over the region. (George’s was only an idea in 2011, only starting distribution two years ago!!) They started out the old-fashioned way, going door-to-door, handing out samples and really just taking their time with a distributor as they learned the business. “Greg knows a lot of people over the bridge since he lived there before moving down to the Eastern Shore, so we pretty much made calls and worked hand-in-hand to give it our all,” said Bakis. Some of the local restaurants that serve George’s are Sunset Grille, Fishtales, Dead Freddie’s, Coconuts, Lazy Lizard, Buxy’s, Evolution and Liquid Assets. Many of these local businesses have since helped guide George’s Mix, essentially taking them under their wing. People all across the state are happy to find George’s in their neighborhood restaurants, with their across-the-bridge distribution rising steadily. Some of these popular restaurants reside in Annapolis, Baltimore and DC and include Ryleigh’s Oyster House in Baltimore, Davis’ Pub in Eastport and Stan and Joe’s in Annapolis. “We really, really pride ourselves on the relationships we’ve established with the restaurants,” said Bakis. “We’re heading into the prime time fall season right now, and every Sunday we’re heading up to M&T Bank Stadium.” Yep, you heard that right… George’s is the go-to Bloody Mary mix come game day.

When asked what’s been the most surprising about the seemingly rapid growth of George’s Mix, Bakis noted without a doubt, the support. “It’s really been the support of the local community, we’re so proud of it and we stand behind it,” said Bakis. “We have the opportunity to expand, build slow, and grow the brand even further.” In addition to the plentiful football tailgates, George’s is jam-packed with fun fall events that dominate their weekends. (WE’RE JEALOUS!!) Some of these include: Maryland Oyster Fest, Maryland Seafood Festival, Metrocooking DC, Flying Dog Festival, Naval Academy Homecoming, Across the Bay 10K, doing all the tailgates for The Naval Academy Class of 85’ (trust us, it’s huge) and when spring rolls around, even the Preakness.

And George’s has no plans of slowing down in the future. Currently on their radar is their newest product release: Oyster Shooter Sauce. “Oyster shooters are such a Maryland staple, heck, a Chesapeake Bay staple. Our recipe is compiled with 10 or 15 of the best we could find from all over the Annapolis, Baltimore and DC area,” said Bakis. “We’re hoping to see it out for distribution next month.”

George’s Mix is also aiming to expand into Pennsylvania and Virginia with long term plans to eventually try and cover the entire East Coast. However, their overarching, long term goal is to be recognized and sold nationwide. “We’re having fun every step of the way,” said Bakis. “Pure and simple, we’re blessed.”

For more information on upcoming events and where you can find George’s go to : http://georgesmixes.com/bloody-mary-mix-find-george/

Keep an eye out on their Facebook page for current information and pictures : https://www.facebook.com/pages/Georges-Mixes/198453990271824 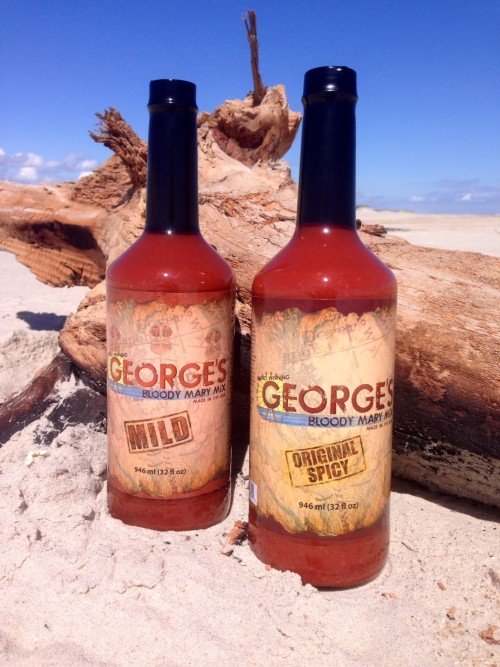