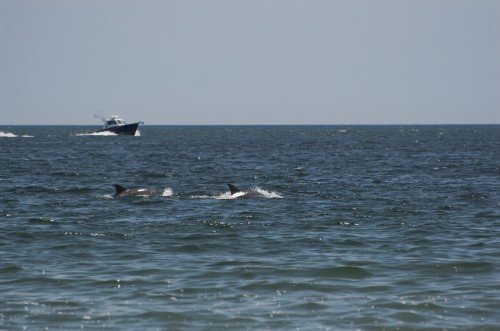 April showers lead to May flowers…or in this case, a beautiful bouquet of May events on Delmarva! From Ocean City to Salisbury, Rehoboth to St. Michaels, Eastern Shore towns are celebrating warm weather with outdoor events activities, including half-marathons, beer festivals, concerts, sidewalk sales and much, much more. Keep reading for all the Delmarvalous happenings…

What: Salisbury is kicking off the month of May with 1st Saturday, featuring The Larks! Held on North Division Street between Church and Main (in front of the Government Office Building), the event will celebrate spring, Salisbury, local music, local business, and community. We LOVE The Larks and listening to them outdoors on a sunny Saturday makes it all the better.

OC Island to Island Half Marathon

Where: Assateague to Ocean City, ending at the Inlet

What: One sure sign of spring for us is the annual Island to Island Half Marathon in OCMD. Runners are lucking out this year with a perfect weather forecast for the 13.1 mile trek from Assateague Island to Ocean City. There is also a 5k option along the Boardwalk in Ocean City. Not interested in running? It’s still a great day to get outside and cheer on the runners!

What: It’s the 11th year for the Crab Soup Cook-Off, with local professional chefs going head to head to compete for the title of “Best Crab Soup.” The event includes a sampling and voting for a small fee, along with entertainment for the kids, exhibits, and live music. Stop by for some fun before taking a stroll along the boardwalk!

Bikes to the Beach

What: It’s the Spring Rally for the Ocean City Bikes to the Beach event, which will include live music, outdoor venues, custom bike show, poker run and more! This year’s Grand Prize includes a trip for two to Vegas, so be sure to enter. For more information on Bikes to the Beach, click here.

What: Planet Maze invites you to celebrate their 20th Anniversary this Saturday, May 2, from noon until 2pm. The celebration will include complimentary laser tag (ages 8 & up), climbing maze (ages 10 & under) and mini golf (all ages). Also enjoy pizza, cake and soda.

What: Spring is the perfect time to take stock of your personal health – why not start now with the 29th Annual Community Health Fair at the Ocean City Convention Center? The Health Fair will include free health screenings and health education.

What: The Bearded Men’s Society of Ocean City is holding a Cinco de Mayo fundraiser at Pizza Tugos in WOC to benefit Diakonia. In addition to the fundraising event, they will be collecting unopened toilet paper, paper towels, Zip-loc bags, mesh/cloth laundry bags, and disinfectant wipes. Can’t make the event? Donations can be dropped off directly to Diakonia on Old Bridge Rd. in West OC or at Pizza Tugos in West OC.

What: Berlin loves any excuse to celebrate, including May Day! Ocean 98.1 is teaming up with Berlin to throw an epic Main Street Berlin party with bands, food, beverages and tons of fun. It’s also the 2nd Friday Art Stroll in Berlin that night so be on the lookout for arts on display along with dining deals. See you all there!

What: You know the drill, it’s time to officially kick off the busy season in OCMD with the annual Springfest celebration! Arts & crafts vendors, sinfully delicious fried foods, and live entertainment headline the four-day long event but what we’re really looking forward to are the ticketed acts: Beatlemania Again, Vince Gill (sold out), and Pat Benatar & Neil Giraldo(also sold out). As country music fans, we were quick to nab tickets to see Vince Gill Friday night so stay tuned for LOTS of photos.

What: Rain or shine, Downtown Cambridge will be throwing a major craft beer party on May 9th, with LOTS of breweries from the Mid-Atlantic region, including their very own hometown brewery, RAR Brewing. Other local flavors will include Evolution Craft Brewing, Burley Oak Brewing Company, Tall Tales Brewery, The Brewers Art, and Stillwater. Tickets are $25 and include all the tastings you want plus a tasting glass.

Where: Starting and ending at Furnace Town Living Heritage Village

What: Each year, the Rotary Club of Snow Hill and the Furnace Town Living Heritage Museum co-sponsor the annual fifty mile fun ride. The course (which includes 50k and 100k alternatives) takes riders through the scenic and pristine countryside on the Eastern Shore. The flat landscape makes for ideal biking conditions. The ride includes a route map with turn by turn, well-marked road paint, a rider number, SAG vehicle patrol, free admission to Furnace Town, and a free luncheon with entertainment and complimentary beverages. There are also rest stops along the way, including an ice cream pit stop at Chesapeake Farms!

What: Ever watch Shark Tank and think, ‘I should be on there pitching my idea’? Well, now’s your chance. WMDT ABC is hosting an open casting call for the show on May 9 at 10am, giving local entrepreneurs the chance to pitch their product or business plan. On-site registration starts at 9am, with interviews from 10am until 4pm.

What: The Lower Shore Land Trust and the Ward Museum of Wildfowl Art have partnered once again for their annual Native Plant Sale Celebration. The event will feature over 60 different native perennials, as well as ferns, ornamental grasses, shrubs and trees…all specifically selected for their beneficial qualities such as high wildlife and pollinator value, drought tolerance, deer resistance, hardiness, beauty and authenticity. There will also be a Scales and Tales environmental education program by the Pocomoke River State Park from 10am until noon. Maryland Master Gardeners will also be at the sale to answer all of your plant-related questions. And last but not least, a demo beehive by the Lower Eastern Shore Beekeepers Association!

Beatdown at the Beach

What: The sound of engines revving and the sights of classic cars cruising up and down Coastal Highway are quite common for May in Ocean City. Each spring and fall, the cruisers roll into town for the classic car show, which includes live entertainment, celebrity guests, special attractions, boardwalk parades, vendors and more. Show hours are as follows: Thursday-Saturday, 9am-5pm; Sunday, 9am-4pm; at the Inlet, 10am-1pm.

What: The Rehoboth Beach-Dewey Beach Chamber of Commerce is hosting their 32 Annual Spring Sidewalk Sale, with a weekend of deals and bargain prices in Downtown Rehoboth and in shops along Route 1 in Rehoboth and Dewey. Visit the Chamber website for more details.

Where: Humane Society of Wicomico County

What: The Humane Society of Wicomico County is hosting the 21st Annual Walk for the Animals. The event will include contests, vendors, prizes, and of course, adorable dogs!

What: Now in its 4th year, the St. Michaels Running Festival offers runners three options, a half marathon, 10k, or 5k, each taking place in one of the oldest waterfront towns on the Chesapeake. The event also includes a 1k fun run for children under age 12. The day will also include live entertainment, delicious food, and complimentary beer for runners. Visit stmichaelsrunningfestival.com to register.

What: Players, cheerleaders, mascots, bands and floats will parade along the boardwalk in OCMD for the two-hour Ravens Roost Annual Parade. We are diehard Ravens fans at ShoreBread, so expect lots of photos!

What: The General Staff of the Confederacy & Army of the Potomac will reenact Civil War battles all weekend long at the Fort Whaley Campground. Experience the daily life of a solider, along with artillery and medical demonstrations, chuck wagon cooking, Civil War era music, and 19th Century church service.

What: Over 70 beers will be featured at this year’s Brewfest, including a wide selection of local, craft beers. Regional and national beers will be available as well. Along with great beer and ales, expect plenty of delicious food and live music. The event sold out last year, so grab your tickets now.

Movies in the Park – Berlin

What: Berlin is debuting movies in the park this year – up next is Fern Gully in Stephen Decatur Park. The movie will start at 8:30pm. Bring a blanket or a beach chair and enjoy the FREE show.